Fanspeak Mock Draft 12/13: What if NFL teams didn’t worry about drafting for need in the 1st rd? 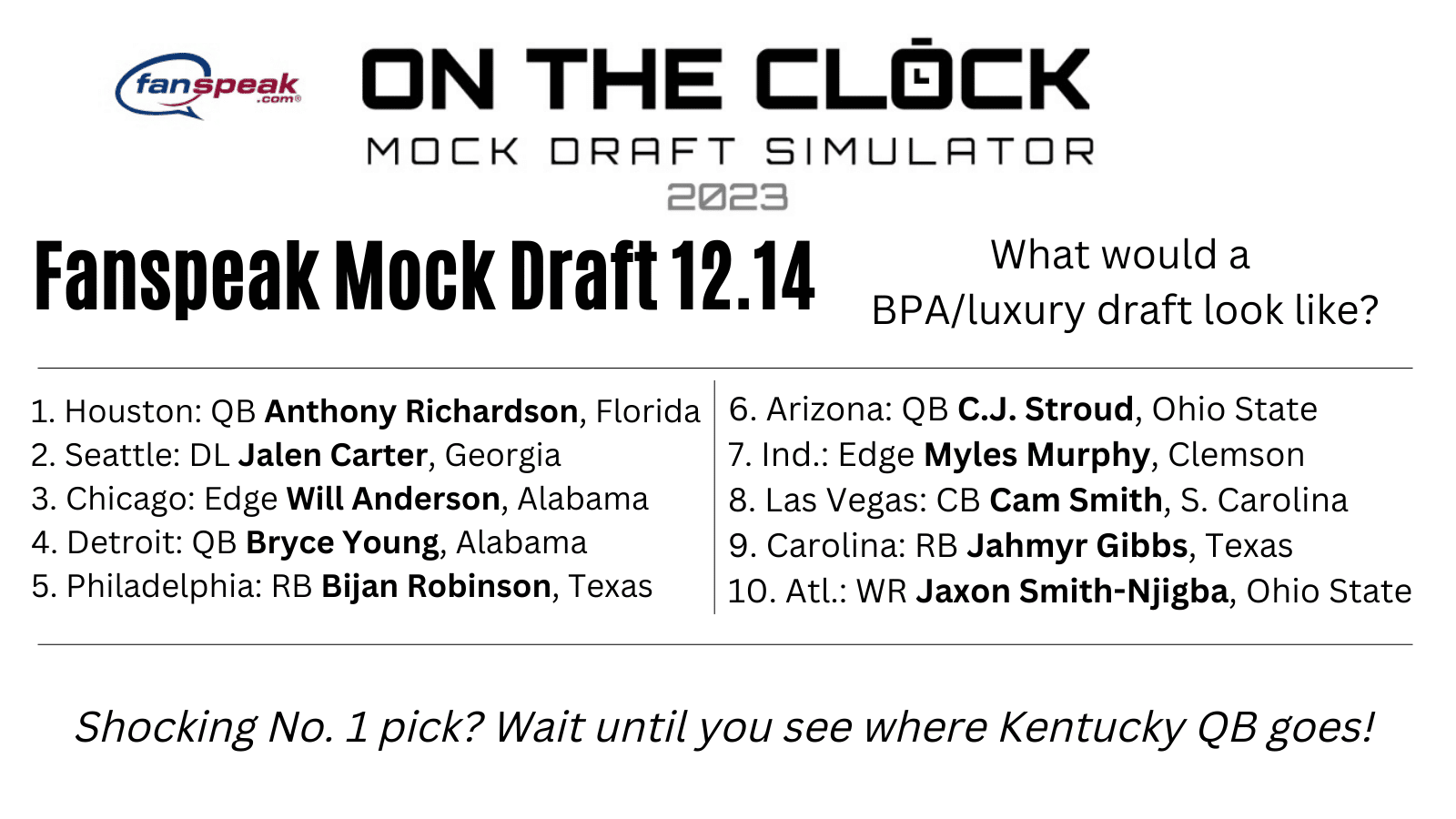 What if every draft pick was a luxury pick?

That only happens when a team feels like it has its proverbial bases covered at every position. That likely means it has above-average veterans or promising, young backups at every position. You almost don’t want to draft certain positions because you’re just not sure how much playing time that player would get.

Wouldn’t that be nice?

Savvy teams build through the draft – you can tell how good a team is at drafting by the number of drafted players it re-signs to multiple contracts. Then, teams plug holes with smart free agent signings, but not necessarily flashy names.

Trades? You’ve got those, too – but only when they make sense. Again, savvy teams never over-spend on trades, as it almost always comes back to haunt them. Those teams tend to hang onto their first-round picks, too, although there are exceptions.

Right now, several teams have seemingly done everything right in terms of team-building. Those teams include Philadelphia, Miami, Buffalo, Baltimore, Kansas City and San Francisco. It shouldn’t come as a surprise that all are playoff teams as of this moment.

The way these teams have built their rosters allows them to go into the draft and take the best player available.

Minnesota can’t say that. The Vikings have holes in the secondary and offensive line and have a 34-year-old quarterback and a 32-year-old No. 2 receiver. Cincinnati has won five consecutive games and a young, star QB, but the team needs help in the secondary and they need a tight end and another pass rusher.

However, if those teams can fill those holes through free agency, then they could conceivably go into the 2023 draft and pick up the best player available – regardless of the depth at that position on their team.

Here’s what a draft in which every team took the best player available (within reason, of course) would look like.

Right off the bat with an eye-roller of a pick, right? But if you want to talk about pure athleticism and potential, then Richardson is your guy as the top three QBs generally come with some troubling issues. Is this pick likely? Absolutely not. Just remember, Baker Mayfield and Sam Darnold went nos. 1 and 3 overall in 2018, while Josh Allen fell to Buffalo with pick No. 7. Like Richardson, Allen was thought to be an incredibly athletic talent who lacked refinement and accuracy.

The team can bypass QB if it can re-sign Geno Stone.

Chicago has a recent habit of collecting, then trading, Pro Bowl pass rushers.

Jared Goff is signed through 2025; maybe he can run things again for a year to let Young watch and learn.

Just what one of the best rushing offenses and offensive line needs: the best RB in the draft.

Kyler Murray has had an incredibly tumultuous season – and that was before the season-ending ACL tear. But Murray still has trade value, and there are plenty of QB-needy teams outside of the top-10 that may be willing to trade for the No. 1 overall pick of the 2019 draft.

He’s the best remaining player in the Fanspeak-Jake Rigdon big board, and he’s an incredible talent.

The Panthers have quietly put together a pretty good roster that still needs a few big pieces to be competitive, namely QB. Robinson would be a great start.

The team would be taking a big risk with this pick, as JSN doesn’t have ideal size and missed most of the season with lingering hamstring issues. Plus, the team drafted a receiver in the first round in the spring. But, JSN would give new-QB Desmond Ridder a reliable slot option, and there are still many draft analysts who think the Buckeyes receiver is the best in the draft.

What do you give the team that lacks talent almost everywhere? The best player available!

Maybe we won’t see this again from stud rookie receiver George Pickens if the Steelers give rookie QB Kenny Pickett a little help.

George Pickens with every right to be upset. pic.twitter.com/v0d8gUCNHl

NFC North teams better fortify their secondaries, because the Packers are starting to accumulate young pass-catchers.

Detroit is on a hot streak but desperately needs to improve its defense.

Los Angeles doesn’t reach very often; an OL could be in play here, too.

OK, forget what we said about re-signing Stone. What?! Will friggin’ Levis is still available at pick No. 17? Seattle would through a parade.

LT Mekhi Becton has played one game in two years.

Even if QB Tom Brady was, say, 15 years younger, the team would still want to protect its most important asset.

Washington would help the run game and keep QB Ryan Tannehill upright, as he’s essentially an OT out there who can catch the ball.

Flowers has rocketed up draft boards in recent weeks.

Porter enters the draft with 1 career INT – none this year.

As mentioned above, the Bengals could use help in its secondary.

Dallas has six – six – OTs. A closer look, though, reveals that it’s a potential weak spot. The starting LT is expected to make his season debut this weekend after missing every game thus far with an injury, while the RT just went down with an ACL tear. The 41-year-old backup likely won’t return next season, while another backup, a rookie, is out for the year with shoulder surgery. That leaves Tyler Smith, the team’s first round pick this year who started out as the team’s starting LG, and 2021 fourth-rounder Josh Ball, who might not make next year’s roster. Keep Smith at LT? The team’s LG will be an UFA at the end of the season. Translation: Jones gives the team options it doesn’t currently  have – and he could play left guard.

Branch might be the safest pick in the draft, should lead the team in tackles next season.

With the injury to Von Miller, the Bills are about to find out that a team can never have enough pass rushers.

LB might be the Eagles only “need,” although that’s debatable after the team invested a third-round pick in the position in two out of the last three drafts.