Out of Isaiah Simmons, Jeffrey Okudah and Derrick Brown, who’s most likely to slide in NFL draft? 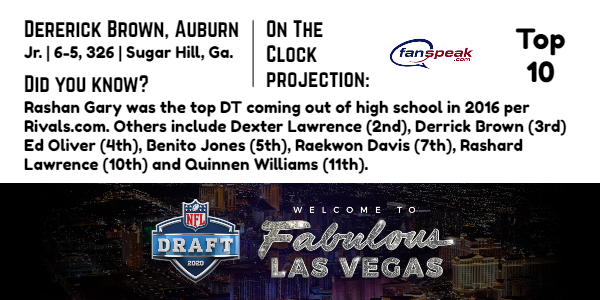 Jeffrey Okudah of Ohio State is the presumed top cornerback in the 2020 NFL draft. However, some scouts say Florida’s C.J. Henderson is the better cover corner.

Isaiah Simmons of Clemson is either the best linebacker or top safety in the draft. But some scouts aren’t impressed, with one executive calling him “the most overrated player in the draft.”

Auburn’s Derrick Brown is widely regarded as a “can’t-miss” prospect and the top defensive tackle in this draft by a wide margin. But Brown also put together an uninspiring Combine performance.

Lions should avoid Auburn’s Derrick Brown at No. 3 overall pic.twitter.com/r2mLmZ5aIo

To be clear, all three players are almost universally considered as top-10 prospects. But if one of those players winds up sliding out of the top-10, the most likely candidate is Brown, said Blogging The Boys founder David Halprin.

The main reason Brown could fall? Blame it on the position he plays. Another contributing factor: A potential run on quarterbacks combined with the depth at other premium positions could push players like Brown down the draft.

“Okudah plays one of the money positions, so it’s unlikely he would slide too much,” Halprin said in an interview with Fanspeak. “Simmons is just a freak, and some scouts think he might be the best talent in the draft.

“So that leaves Brown, who plays a position that tends to get less notice and there was the less-than-stellar combine, too.”

Something else evaluators may consider: Quinnen Williams of Alabama was the highest-ranked DT last season, and he wound up being drafted third overall by the New York Jets.

But several of the other DTs drafted after Williams had bigger impacts as a rookie last season, including Houston’s Ed Oliver (pick 9 by Buffalo), Clemson’s Christian Wilkins (pick 13 by Miami), Clemson’s Dexter Lawrence (pick 17 by New York Giants) and Mississippi State’s Jeffery Simmons (pick 19 by Tennessee).