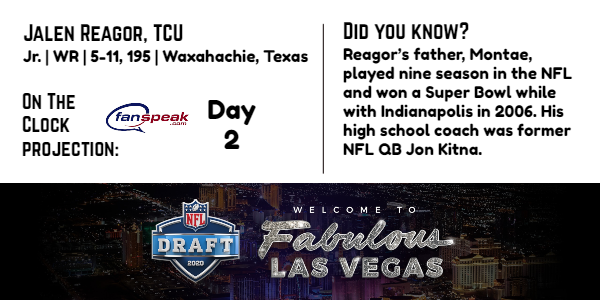 Jalen Reagor of TCU entered the 2019 season as one of the top wide receivers in the country.

But uncertainty at quarterback helped contribute to a disappointing 5-7 overall record for TCU. Predictably, Reagor didn’t have the season he was hoping for, finishing with 43 receptions for 611 yards and a career-low five touchdowns. Then came the grumblings about the 5-foot-11, 195-pound junior’s ability to run routes, as first reported by Walter Football.

And for those who are concerned about his dropoff in production, there’s this nugget from CBS Sports’ Chris Trapasso:

In other words, there are still plenty of Reagor fans out there among both scouts and draft analysts alike.

From The Athletic’s Bob Sturm, who’s also the co-host of The Hardline on Sports Radio 1310 The Ticket in Dallas:

“(Reagor) attacks every part of your defense and puts everyone on their heels. There is a chance that he could offer some real DeSean Jackson elements to your team with deep shots and the quick game. The acceleration is insane; he goes 0-to-100 real quick. If you are looking to add some juice to your operation, this is your guy on both offense and special teams.”

Sturm also mentioned some of his concerns, most notably Reagor’s “route-tree limitations,” ball security and catch radius, which Sturm said means “…contested catches and inside work might be difficult at the next level.”

Sturm compared Reagor to Mecole Hardman, who was drafted by Kansas City last year with the No. 56 overall pick.

Reagor is currently the No. 77 overall prospect in the latest Fanspeak-Steve big board.