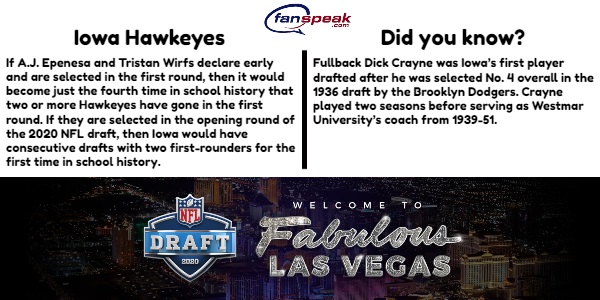 The class of pass rushers in the 2020 NFL draft got significantly stronger within the past 24 hours.

Epenesa is the No. 5 overall player in the latest Fanspeak-Steve big board. Lynch is the No. 109-ranked player.

There was a stretch late in the season when it was thought that both Epenesa and his Iowa teammate, offensive tackle Tristan Wirfs, the No. 11 overall player in the Fanspeak-Steve big board, were staying in school. Wirfs has not made his draft intentions publically known.

The deadline for underclassmen to make their decision is Friday, Jan. 17.

Epenesa and Wirfs submitted their names to the NFL College Advisory Committee to gauge where they might be drafted if they were to leave school early.

However, Epenesa did much of his damage late in the season after a relatively slow start, with some analysts wondering if he should move to defensive tackle in the pros. But Epenesa went on a tear to close out his college career, as all but three of his sacks came in the team’s final seven games. That includes a dominant performance in Iowa’s bowl game win over USC, when Epenesa racked up 2.5 sacks and one forced fumble.

Scouts and analysts tout his power, motor and hand usage.

“Epenesa excels at winning inside hand position on opposing linemen and clubbing away their attempts to regain control while shedding blockers in pursuit of the quarterback,” writes NFL.com’s Nick Shook.

In terms of Epenesa’s speed – or perceived lack of it – likely means the junior won’t “be a headline-grabber” at the Combine.

Instead, “…his technique and strength will allow him to make a lengthy career for himself in the NFL,” Shook writes.

Like Epenesa, Lynch is a big-bodied defensive lineman (6-foot-4, 295 pounds) who has some positional flexibility. Lynch played defensive end in Baylor’s 3-4 front and is currently listed as the No. 5 defensive tackle by ESPN draft analyst Mel Kiper.