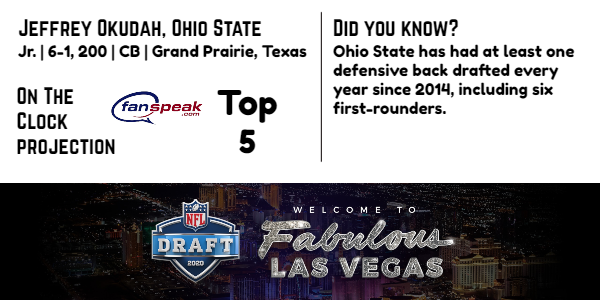 As the bowl season begins to wind down, more players are announcing their NFL draft intentions.

Of the latest announcements, Ohio State’s Jeffrey Okudah is among the biggest, as the junior cornerback confirmed that he is entering the 2020 NFL draft. Okudah is widely regarded as a top-10 pick and the top cornerback in his draft class.

Okudah, who is 6-foot-1, 200 pounds, finished the season with 34 tackles and his first 3 career interceptions. He also had 9 passes defended, including two in the team’s 29-23 loss to Clemson in the Fiesta Bowl.

“We’re talking about a kid who enrolled early and was a scholar athlete as a true freshman,” an area scout told The Bleacher Report’s Matt Miller in his Oct. 11 Scouting Notebook.

“I was there for Ward and Marshon. Okudah is what would happen if you combined their positive traits,” the former assistant said, via The Bleacher Report.

Okudah is the No. 4 overall prospect in the latest Fanspeak-Steve big board.