“At least we won the Super Bowl.”

That’s what every Los Angeles Rams’ fan thought following the conclusion of a disappointing, injury-marred 5-12 season.

They may be saying that for several years.

Consider the following challenges on the Rams’ horizon:

Essentially, Rams fans may be looking at more 5-12 seasons in the future.

Still, it’s easy for fans to say “worth it” – will they still feel that way in two, three or even five years from now? More importantly, will ownership feel that way?

As things stand now, Los Angeles can probably come away from this draft with one, maybe two, starters along the offensive line, especially if the team uses its first two picks in the second and third rounds to address the tackle and guard positions. Then the team has to hope those picks pan out.

And while teams can always find ways to get under the cap, Los Angeles has too many of their own free agents to sign and holes to address to make a run at any of the top-tier free agents. That means the team will likely have to take a “bargain bin” approach to free agency and hope it hits on a few starters.

But why take the proverbial pedal off the gas?

In other words, why not remain aggressive when it comes to team-building?

Why not trade away assets if you’re not a .500 team with those players?

Los Angeles still has elite, All-Pro talent on its roster. In theory, the team could be a contender again with better luck health-wise and a few low-cost moves here and there to plug some holes. Removing any of those elite players via trade or injury makes that far more difficult and unlikely.

But that’s not the situation the Rams find themselves in, especially with the quarterback and head coach situation up in the air.

So, if General Manager Les Snead wants to remain aggressive, he could take an opposite approach to the draft and actually accumulate picks by trading away some of the team’s few assets.

Sound ludicrous? Remember, Los Angeles finished 5-12 with players like DL Aaron Donald, CB Jalen Ramsey and WR Cooper Kupp on its roster. The fact that two of those players, Donald and Kupp, missed a combined 14 games is part of the problem.

How much worse can the team be without one – or all – of them?

Los Angeles will have almost a full complement of draft picks in 2024, so expect any trade to focus on the upcoming draft rather than future picks. Also, it’s hard to imagine Donald playing for another team, especially since he briefly mulled retirement after the Super Bowl season.

Expect a similar return for Ramsey.

Of course, those moves would all-but assure the team of a bottom-5 finish next season and maybe beyond.

But that appears to be the path Los Angeles is already on. Starting over and rebuilding through the draft at least gives the team – and fans – hope for the future and, in theory, is more sustainable.

It would take an enormous draft haul to pry Chicago away from this pick because it would mean the team bypassed a shot at drafting an elite pass rusher.

This pick still comes down to Stroud vs. Bryce Young.

If anyone can live up to the recently retired J.J. Watts’ legacy, it’s Carter, who looked unstoppable against TCU.

The only way Indianapolis misses out on Young at this point would be if another QB-needy team moves up to No. 3, currently occupied by Arizona.

Will it be a QB or a defensive lineman? If the team re-signs UFA Geno Smith, then the answer is easy. From Stacy Rost of Bump and Stacy on Seattle Sport 710 AM: “There are flaws, but this is an offense and a quarterback that has kept Seattle competitive through much of the year. Imagine where they’d be if their defense could do the same.”

South Carolina has produced several NFL-ready DBs in recent years, and Smith may be one of the best.

Las Vegas is probably looking to move on from QB Derek Carr. Ironically, whichever team trades for him this offseason will likely have a better record in 2023 than a Levis-led Raiders team.

Bresee had one dominant season his freshman year, missed most of his sophomore year, then delt with nagging injuries and personal tragedy his third and final season. So this might be a tad high, especially for a defensive tackle. But when healthy, Bresee looks like a future Pro Bowler.

Carolina has quietly put together a very stout team, with young playmakers on both sides of the ball. If only the team had a young, promising QB to pair with them …

Super tempting to take UT’s Bijan Robinson or Ohio State’s Paris Johnson here. But teams need at least three starting-caliber CBs if they want to contend – a lesson Philadelphia will soon learn as it continues on without Avonte Maddox, who is out indefinitely with a toe injury.

Desperate need? Meet best player available. The steady Johnson is exactly what the Titans need as it moves closer to the Malik Willis era. Now the team needs to add more weapons on offense and maybe a new starting center.

A Budda Baker-clone, Branch is a safe pick with Pro Bowl potential.

The anemic New England offense needs playmakers – which is why RB’s Bijan Robinson should be under consideration, too.

Mayer is a big, dependable target that will help whoever is the Packers’ QB next season.

Let the Sam Howell era begin! The team is too talented and too close to contention to waste a pick on the fifth-best QB – at least in the first round. Washington needs to come away from this draft with at least one CB capable of starting from Day 1.

Pittsburgh hopes Skoronski is their version of Rashawn Slater, Skoronski’s former teammate at Northwestern and another undersized tackle who has dominated since Day 1.

There’s a growing sense that the big, athletic Ringo may be a bit over-hyped. While he comes with some flaws – teams like Tennessee and Ohio State weren’t shy about passing in his direction – Ringo’s elite traits will be too tempting to pass up.

Who, you say? Expect Melton to move up the rankings if he decides to declare. Here’s a little refresher on Melton via Walter Football’s Dec. 5 Hot Press report: “Some team sources think Melton could be their highest graded corner for the 2023 NFL Draft, and they feel he could have the best 2022 tape of any 2023 cornerback prospect.”

Seattle hasn’t had a dominant DL in a long time. The additions of Murphy, and now Smith, will help change that. Just don’t expect drastic improvement in 2023 – it takes linemen a bit of time to develop.

Jacksonville could play Jones at guard or replaces UFA Jawaan Taylor with Jones at RT. Either way, this would be a major coup for the Jaguars, as some draft analysts say Jones could be the best OT in this draft class.

New York desperately needs help at receiver – and if the Giants get the 2021 version of JSN, then this pick could be a steal this late in the draft.

Really? No one wants the potential offensive rookie of the year? “That’s OK,” Baltimore says, “we’ll take him.”

Los Angeles needs more speed at the receiver position, and you don’t get much faster than Hyatt.

If it walks like a duck and quacks like a duck … there’s a reason why Witherspoon is often mocked to Dallas – the Cowboys desperately need another capable boundary cornerback to play opposite of Trevon Diggs.

Here’s La’el Collins’ numbers in his first year at Cincinnati: 951 snaps, 8 penalties committed, 5 sacks allowed, 57.9 PFF grade. Harrison’s stock has been rising. While Collins is more of a mauler at RT, Harrison is a far better athlete, possesses elite quickness and ideal size.

Minnesota really needs a starting CB after ranking second-to-last in pass defense, but taking a CB here would be seen as a bit of a reach. However, there are six CBs ranked in the second-round to early third-round in the latest Fanspeak-Jake Rigdon big board. Ojulari is the younger brother of Giants pass rusher Azeez Ojulari. Pass rusher is a sneaky need for the Vikings.

Denver gets very lucky here, as they need a tackle but don’t pick again until back-to-back picks early in the third round. Wright won’t solve all their problems, but he should start for the Broncos for the next decade.

One of the league’s most-explosive offenses gets one of the most-explosive players in this draft. Gibbs has been compared to former Tennessee RB Alvin Kamara of New Orleans.

Both of Kansas City’s tackles will be unrestricted free agents at the end of the season. Jones is the last of the Tier-2 tackles, meaning he’s a fringe first-rounder who likely won’t be available when the Chiefs go back on the clock in Round 2.

Of the five Eagles who made PFF’s All-Pro team, three will be UFAs at the end of the season. That includes LB T.J. Edwards, a first-team selection. 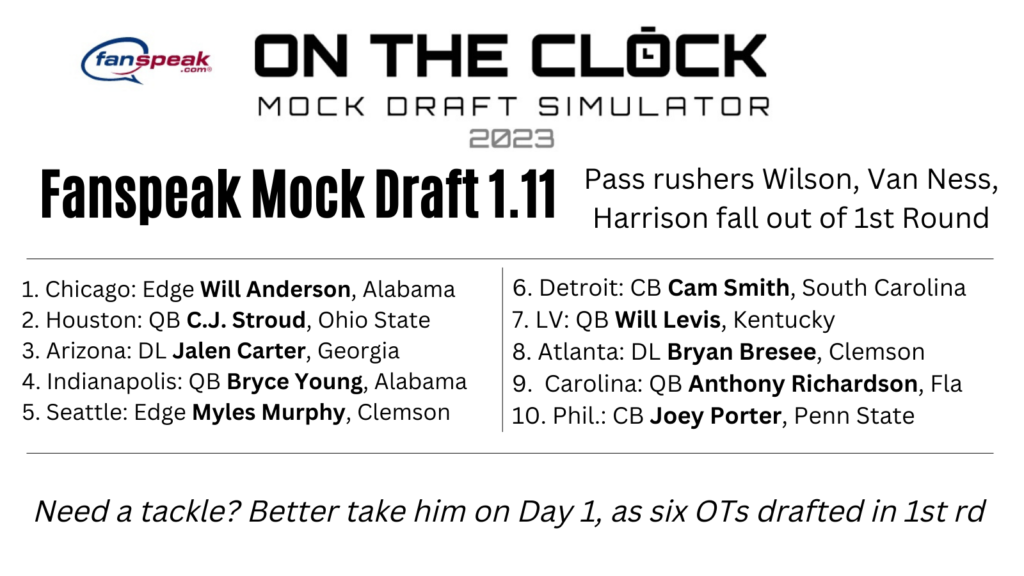 Fanspeak Mock Draft 1.26: What if teams don’t reach in the first round?

Every year, there’s at least one surprise pick in the first round. Sure, teams like Dallas and New…

Read More about Fanspeak Mock Draft 1.26: What if teams don’t reach in the first round?

Fanspeak Mock Draft 1.19: First-round trade possibilities – who will move up?

While we’re still waiting on word from a few Georgia prospects, the rest of the underclassman draft intentions…

Read More about Fanspeak Mock Draft 1.19: First-round trade possibilities – who will move up?