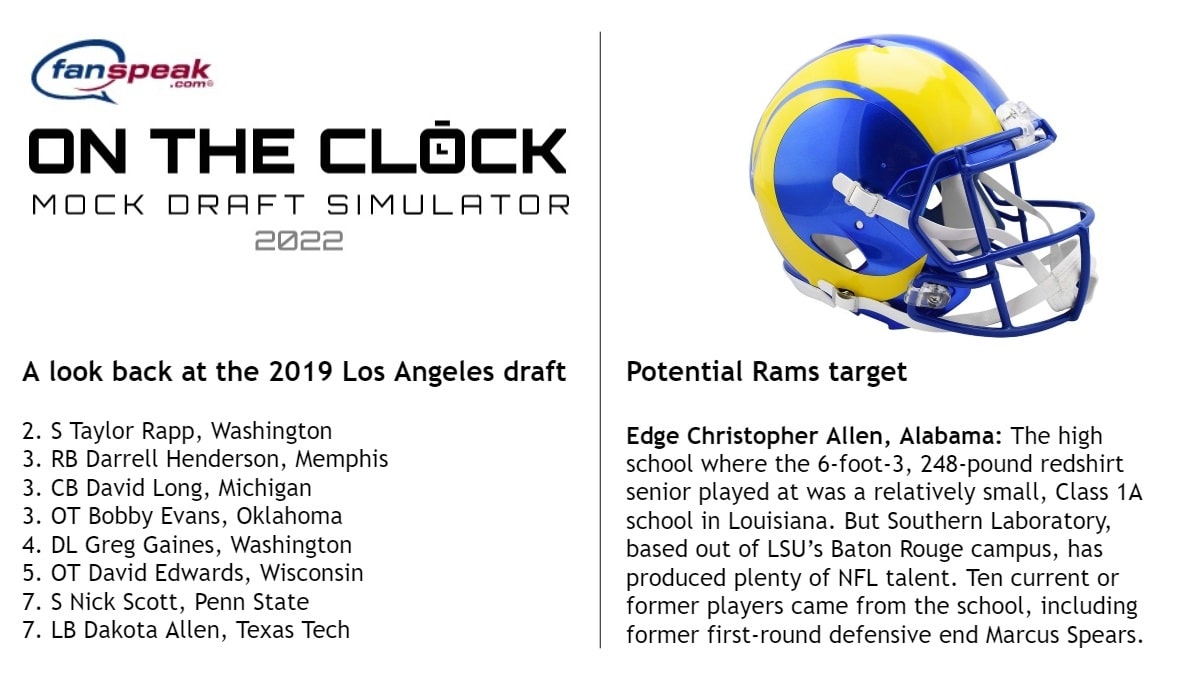 For all the hullabaloo regarding Los Angeles’ use of draft capital, it’s still important to remember that the Rams have eight draft picks, which ties them for the fifth-most selections.

No picks in the first or second rounds? No problem, as the defending Super Bowl champions have managed to patch over most of their perceived holes through trades and free agency.

However, one issue remains: pass rusher. Who’s going to start opposite of Leonard Floyd?

From Venie Randy Soares of SB Nation’s Turf Show Times: “At first glance, it looks like Justin Hollins and Terrell Lewis. Hollins has been steady as a Ram and Lewis has shown flashes of playmaking potential, but both had injury problems in 2021. Fans are anxious for Chris Garrett to get a look, but he was only active in one game last season.”

To be fair, the Rams likely won’t find an outside linebacker who immediately produces big sack totals his rookie year, especially considering where they pick in the third (No. 104) and fourth (No. 142) rounds. Consider last year’s sack leaders. Of the 28 players who finished with 9.0 sacks or more, 19 were drafted in the first round.

But that doesn’t mean the Rams can’t find a Trey Hendrickson in Round 3 or later: a player who contributes as a rookie and steadily moves up the depth chart. Hendrickson, a third-round pick by New Orleans in 2017, didn’t become a full-time starter until Year 4 but finished last season with 14 sacks for Cincinnati, good for fifth-most in the league.

Here are three potential outside linebackers who should be available in Round 3 and later:

The 6-foot-3, 241-pound redshirt senior has a lot in common with Terrell Lewis. Like Lewis, Allen entered the season as a potential first- or second-round prospect, but injuries derailed the collegiate careers of both Crimson Tide outside linebackers.

For Lewis, his injury history was extensive enough that it caused him to slide to the Rams in the third round, where he was the No. 84 overall pick in the 2020 draft. Allen should expect a similar slide this year after missing all but one game. He suffered a broken foot while strip-sacking the Miami quarterback in Alabama’s season opener.

One potential barrier for the Rams and Allen: His ranking puts him somewhere in the mid-fourth round range. That means, the team either needs to over-draft him in the third or look for other options, as he’s unlikely to slide all the way to pick No. 142 overall due to the importance of the position.

Every sack. Christopher Allen has control of the OT's hands on every sack. Here's another. Just club them away. pic.twitter.com/byb7H1gOZw

It’s possible Johnson is still available late in the fourth round, but if the Rams don’t take him by then, he likely won’t make it to pick No. 175 overall in the fifth round.

Translation: If Los Angeles wants a pass rusher who’s at least capable of contributing as a rookie, then the Rams better draft him by the fourth round.

Tyree Johnson has some juice/twitch off the edge for A&M – nice spin move and then some snap jumping vs Cross pic.twitter.com/lViafVjY84

While it’s possible for a team to find a premiere pass rusher after the first round, it’s exceedingly rare the later you go in the draft. Of the 28 players who had at least 9 sacks last season, four were drafted in the second-round, two were drafted in the third round, one was taken in the fifth round and two were undrafted.

That doesn’t necessarily mean a team can’t find an OLB on Day 3 capable of sticking around for 10-plus years. But finding a premiere pass rusher on Day 3 or later? Good luck.

One name who could buck the trend is the 6-foot-4, 245-pound redshirt senior Nichols, who had 27 tackles, 10.5 TFLs and 10 sacks his final year at the school, all career-highs. Nichols, though, is still extremely raw. The Kihei, Hawaii native was a basketball player who didn’t play on his high school football team until his sophomore year, then played for two years at Arizona Western College before transferring to Nevada. There, Nichols was an undersized defensive tackle.

Whoever drafts him (or signs him as an undrafted free agent) may see Nichols as a Shaquil Barrett-type, another undersized OLB who was relatively raw and went undrafted out of Colorado State in 2015. The 6-foot-2, 250-pound Barrett was a part-time starter in Denver from 2015 to 2018, then had a breakout season with Tampa Bay in 2019 when he finished with 19.5 sacks. Barrett has racked up 37.5 sacks the past three seasons for the Buccaneers.

TRISTAN NICHOLS IS BRINGING THE

What round will Los Angeles take a pass rusher? Find out in Fanspeak’s latest Rams mock draft. 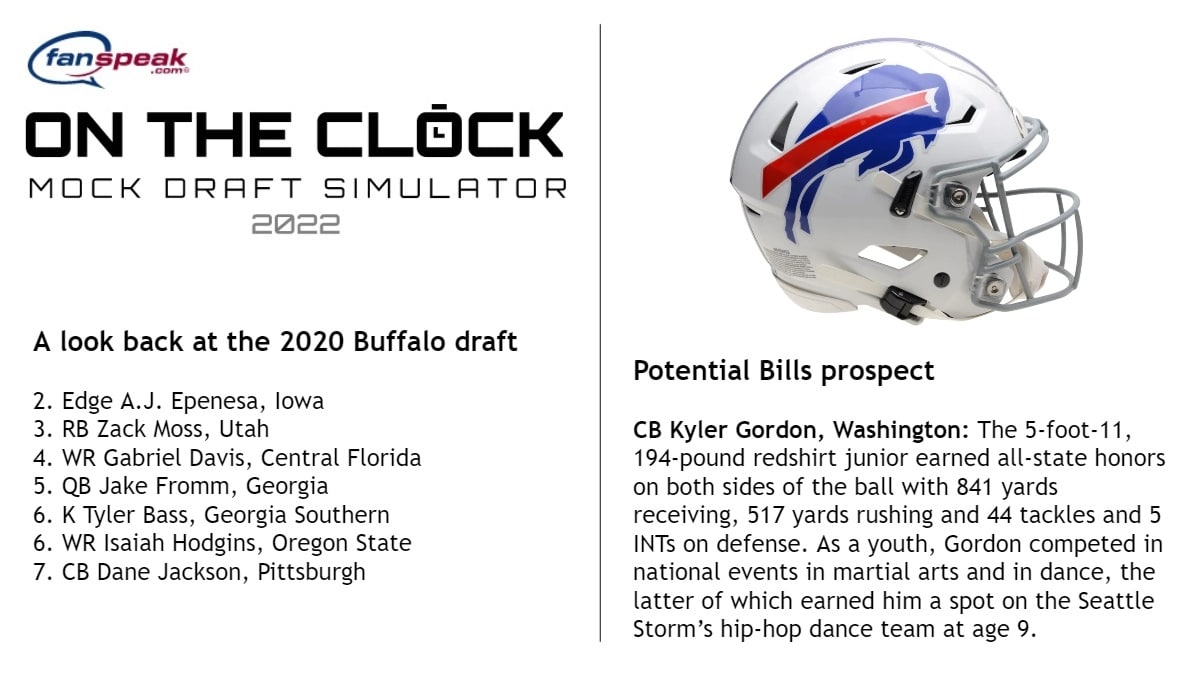 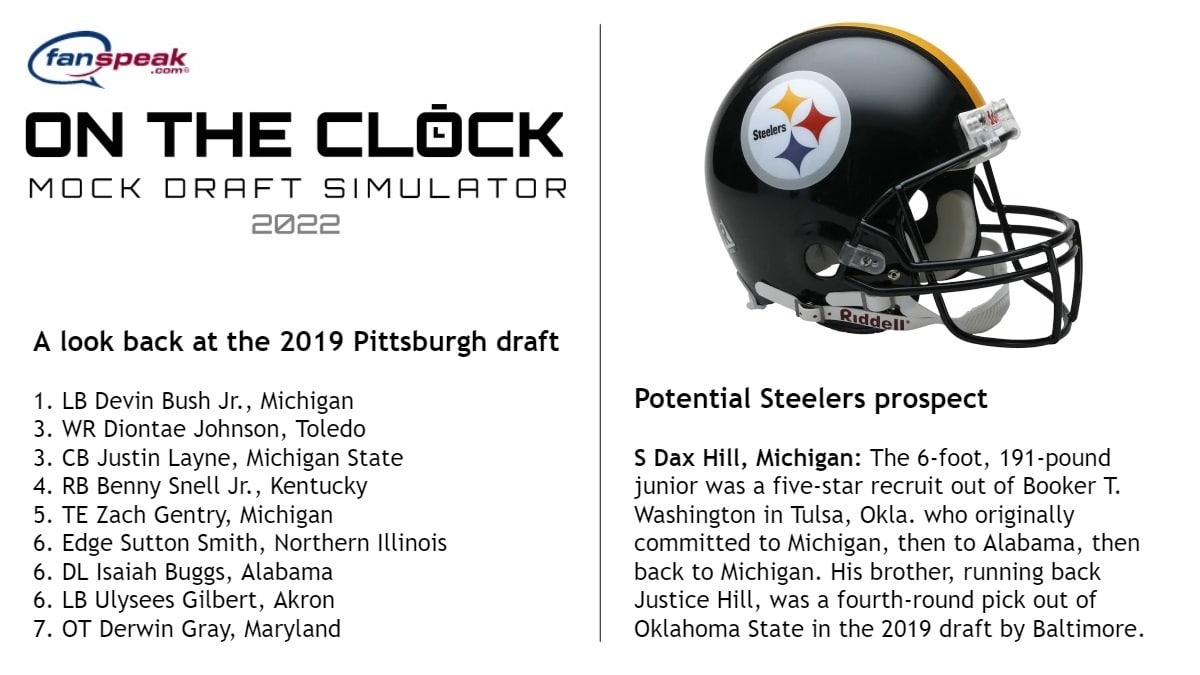