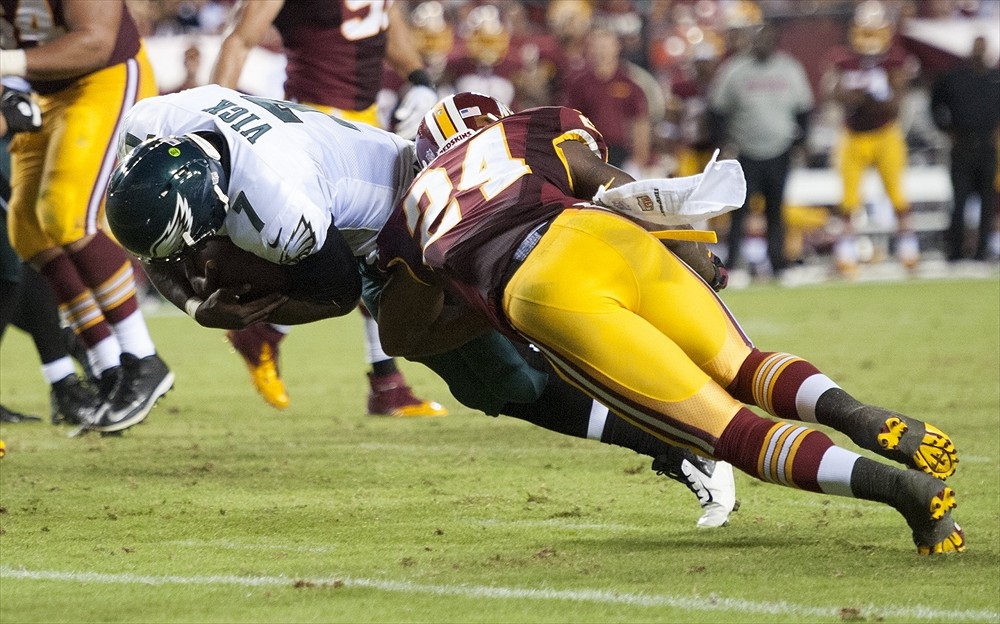 Here’s a look at 5 returning defensive players, who could be fighting for a job this training camp.

-Bowen was a big free agent signing of the Redskins back in 2011 and initially it looked as though he would make a pretty big impact as he had a strong first season in D.C. The past two years though he’s seen his play decline considerably. While it’s not entirely been Bowen’s fault as he’s dealt with a host of injuries including a microfracture injury in his knee late in the season last year, his inability to stay healthy has become a liability for the team. Making matters worse is the fact that Bowen’s salary cap impact has increased making him one of the more expensive players on the team. With his status up in the air this year due to the microfracture surgery, keeping him around doesn’t make too much sense. Perhaps Bowen works out a major salary reduction to stay with the team, but if they can’t count on him to be healthy the Redskins can’t justify paying him.

-Golston has been with the Redskins since they drafted him in the 6th round back in 2006. He’s proven to be a solid back-up, who can contribute some on special teams. Golston though could be facing an uphill roster battle in camp this year as he could be on the losing side of the numbers game. The Redskins are only going to keep 6 or 7 defensive linemen (and the past couple years they’ve gone with 6), which could make it tough for Golston to earn a spot. Four spots are already locked down with Barry Cofield, Jason Hatcher, Chris Baker and Jarvis Jenkins all locks for a spot, barring an injury. That leaves just 2-3 spots between Golston, Bowen, Doug Worthington, Chris Neild, free agent signing Clifton Geathers and a couple street/UDFA free agents. Of that group Bowen (if he’s healthy and reduces his contract) and Geathers would probably be ahead of Golston at this point. Neild and Worthington both have some experience and are cheaper options so even if Golston beats out Bowen or Geathers, he might not be a lock for a spot.

-Rambo was considered a steal in the 6th round of the draft last year by many and the hype train got rolling pretty quickly with the former SEC standout last year. It grew even further when during OTA’s and mini-camp, Rambo was getting high praise from the coaching staff and it was thought that he could end up starting. As training camp was getting going he was considered further along than fellow rookie safety 4th rounder Phillip Thomas. Thomas was injured in the first and the team did nothing to bolster their safety depth before the season, leaving Rambo as a starter despite serious questions about his play during preseason. Rambo was benched early on in the season and was even made inactive after he struggled on the Redskins special teams units. While he eventually got back on the field, Rambo continued to struggle on special teams. The Redskins brought in Ryan Clark this offseason, in addition to re-signing Brandon Merriweather. With Phillip Thomas fully healthy it appears that 3 of the likely 4 safety spots are already set. Rambo will now need to beat out Tanard Jackson, Trenton Robinson, Akeem Davis and possibly CB/S hybrid E.J. Biggers (see below) for the final spot. The real key for Rambo will be how he improves on special teams. If the Redskins are serious about boosting their special teams this year, they can’t justify keeping a 2nd year 6th round pick back-up safety that struggles on special teams.

-Rob Jackson has been part of the Redskins organization since he was drafted in the 7th round of the 2008 draft, but his time in D.C. could be coming to a fast end. Jackson gained some consideration among Redskins fans for his solid play in relief of Brian Orakpo back in 2012, when Orakpo missed the final 14 games due to injury. Jackson wasn’t near the pass rusher that Orakpo was, but he was used in a platoon system and made some nice plays for the Redskins against the run and in coverage. Jackson was suspended for the first 4 games last season, but he did come back to play as a solid back-up for the Redskins down the stretch. After not receiving much free agent interest, Jackson returned to the Redskins on a 1 year deal. The Redskins though spent their top pick on rush linebacker Trent Murphy, meaning that the Redskins have their top back-up and 3rd OLB during pass rush situations. That leaves Jackson to compete with 2nd year OLB Brandon Jenkins for what is likely to be the final OLB roster spot. Jackson is more well-rounded of the two, but Jenkins is a more natural pass rusher and signed extremely cheaply for the next 3 years. Jackson is going to have to clearly out play Jenkins to beat him out of a roster spot.

-The Redskins signed E.J. Biggers last year to be either their 3rd or 4th corner, depending on the healthy of Josh Wilson and the development of David Amerson. As week one rolled around though and Phillip Thomas was on IR and Brandon Meriweather wasn’t 100%, Biggers was pressed into duty as a starting safety, a position he hadn’t played since he was in High School and not something he worked on much in practice. Not surprisingly Biggers struggled in the role, and was a major liability to start the season. Biggers remained in the mix for a hybrid safety role given the ineffectiveness of Bacarri Rambo during the season. Though it never became a positive, Biggers play in this role (and the back-up corner role) improved throughout the season. Now Biggers figures to be in a tough battle for a roster spot this year. The top 4 corner spots (Hall, Amerson, Tracy Porter and rookie Bashuad Breeland) are all set, leaving just 1 or 2 spots. Biggers will face some serious challengers including youngsters with promise like Richard Crawford and Chase Minnifield, in addition to a whole host of street/undrafted free agents. Even if the Redskins keep 6 corners, Biggers might be on the outside looking in. One saving grace for Biggers could be the development of the young safeties. If they are still struggling, Biggers could earn a spot as a 6th corner given his ability to help back-up that position.