Point/Counterpoint – How Improved is the Redskins Offensive Line? 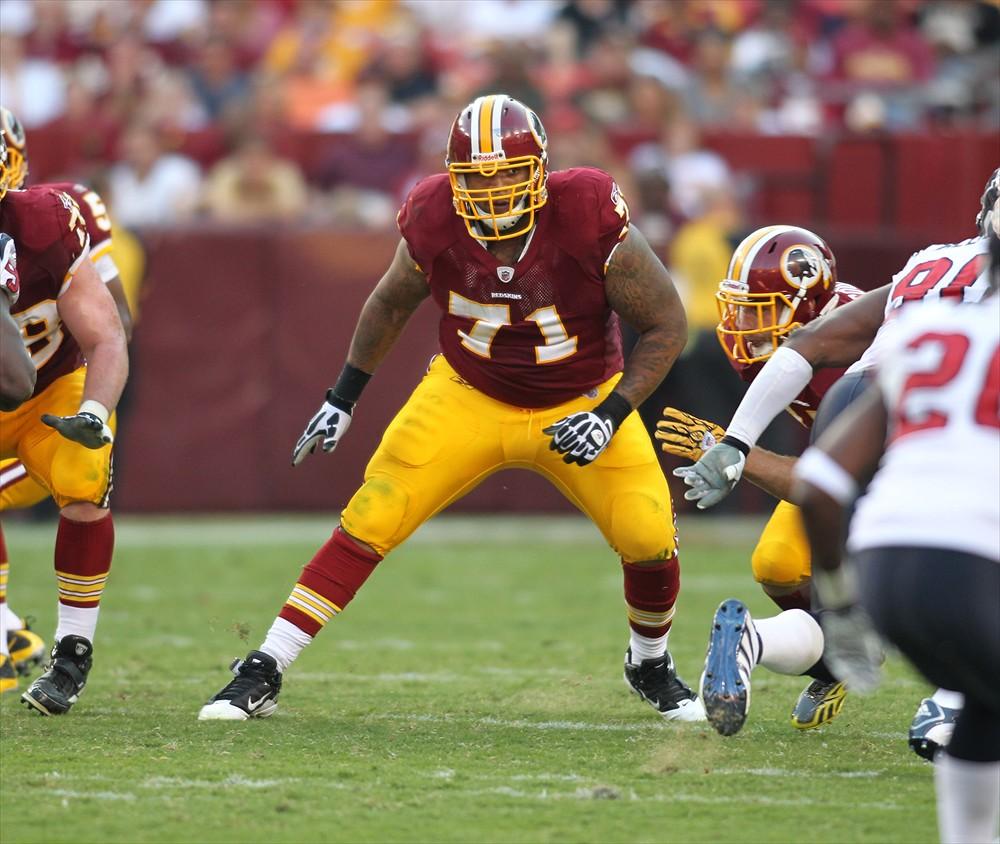 Last week we debated the Skins defensive line, and I was told by an outsider after praising them that I was taking hits from Trent Williams’ peace pipe.  So this week let’s look at ole Silverback and the rest of the offensive line.  It’s pretty simple, if you liked them last year you’re in luck.  If you didn’t, you’re not.  Not much change other than a couple mid round draft picks were added.

I am going big early here.  I think they will be better just because of one major factor — RG3.  Even as a rookie I have confidence he will change the offensive line and the whole offense in general compared to Grossman and Beck.  I regret it took me like 50 words to change the topic to RG3, but I really believe he will make them much better.  He will need Trent Williams to become a Pro Bowler, but is he capable?

Will Trent Williams take his game to the next level this season?

I think the idea that RGIII will lead to improvement among the offensive line is a little overblown. I know he’s advanced and mature for a rookie, but he’s still a rookie, and he’s not going to be used to the closing speed of the DeMarcus Ware’s and Trent Cole’s of this league. And really you look at some of the most mobile QB’s of the last 10 years and you will see their sack rates are all very high. These QB’s do make plays with their feet some, but they also are too overconfident and actually increase the number of sacks the team will take.

I don’t know if Griffin will have that quick release that works so well for Peyton Manning and Tom Brady. And as much as Rex Grossman’s lack of speed hurt this offense in some areas, it did help in one, and that is sacks allowed. His quick release probably saved 10 or more sacks (probably 30 more if the Beckster had to start all 16 games). Due to those reasons I see the addition of Griffin necessitating a better line, not sticking with the status quo. Now the real question is if you think RGIII will have a bigger impact then yoga?

You laugh but in 2013 Ray Wright is going to be out as strength coach and be replaced by Sri T. Krishnamacharya, the father of modern of yoga, when Jammal Brown is an all-pro.  I know you feel he is a huge weakness, but for now we have to hope he comes back to his pre-injury form.  This is the case where I hope they see something as football people that I don’t see as a non-football guy.  They passed on a guy like Buffalo Bell (only call him that because not sure what his current first name is) so hopefully they know that if Brown can get healthy with a full offseason (which is big for him) he can be respectable at RT.

I am far from banking on that, so wouldn’t be surprised if the starting RT in New Orleans is Big Willie Smith or someone who isn’t on the roster.  As for yoga though, I saw the Maryland football team was big on it and that worked out so great last season.  Do they have the guys though anyway to effectively run the Shanahan zone blocking scheme?

I think our only hope for the RT spot is that one of Polumbus, W. Smith or Tom Compton surprises everyone and shows that they can start. The Redskins seem to be pushing the magic of yoga story on every news outlet, but most of the reporters who wrote about it even said that Brown did not look fluid in mini-camps. If is already looking like our least fluid OL now right after the yoga treatment, how is he going to look 3 months from now in pads with actual hitting and when he isn’t following his routine.

You bring up a really interesting question about whether or not they have the guys to run the ZBS scheme. I think for the most part (i.e. not Brown) they have capable guys, but it isn’t effective, because they are all basically league average players. If Will Montgomery was your 5th best offensive linemen then you are doing pretty good, when he’s your 2nd best, you are hurting.

First of all, big ups to Tom Compton as an @jcmanuel2323 follower on Twitter.  I agree this could be a disaster in the making and would need all players to play at their highest level to be an effective offensive line group.  They have mended this group together in the past two seasons and hopefully Shanahan, Shanahan and Forrester can get it to click.

I think the depth is good but unfortunately that it is good with average players.  And you can always hope LeRibeus, Gettis or Compton turn into a steal like some of the guys of the 2011 draft.  Do you feel this is the worst offensive line in the division though?  Dallas has come together with Tyron Smith, but the Eagles lost Jason Peters and the Giants have an aging line that Manning made look real good with his effectiveness under pressure.

My problem is I kinda like LeRibeus, Gettis and Compton better than Lichtensteiger, Chester and Brown. Not as a better long term option, but that it might be better right now. Our depth maybe improved from last year, which is good in case of injury, but the OL in the one position that depth is needed but has little impact unless someone goes down (or in the Skins case suspended). I think the big issue is the lack of starting quality talent.

Even with the loss of Jason Peters (arguably a top 3 LT) I think that Eagles line is far better than the Skins. Dallas seems to continue to get better (though they are far from perfect). As for the Giants they are the one team that the Skins may be able to surpass in terms of the line, but it is far from certain. They were without their LT Beatty for 6 games last year, and their C Baas for 5, if they return they might have a better impact than TW and Licht returning for the Skins. The true wild card for the Giants is the play of Chris Snee and David Diehl. These are two top level pros that had down years last year. If it is a sign of things to come the Giants are hurting, if they return to partial form they will easily surpass the Skins line. Of course since they aren’t doing yoga it doesn’t bode well for them to be productive.

The sad thing is a number of guys on that list you’d still rather have than Jammal Brown. Also, how did you forget (I guess it’s not hard since he never played for the team) one of our biggest draft busts of all-time OT Andre Johnson.