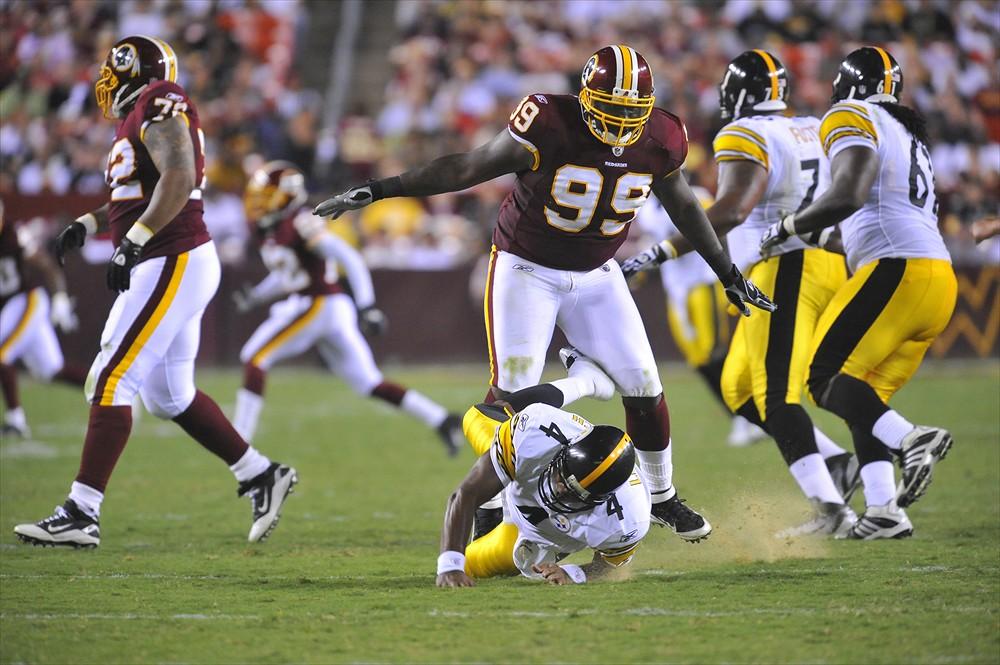 The Redskins defensive line looks to be arguably the best unit on the football team next to possibly the linebacking core.  I think Shanahan has done a strong job adding both talent and depth to this positional group.  Having Barry Cofield and Stephen Bowen back for their 2nd season should make them better.  Add the resigning of Adam Carriker and most importantly the addition of Jarvis Jenkins back from the ACL, and I really think this is the backbone of the team right now.

But it doesn’t end there, they have depth made up of guys with game and past starting experience that I like a lot.  But am I giving them too much credit?

I would say you are maybe giving them a bit too much credit. Now that is not to say that this line doesn’t have some talent and potential, but really I think they are just slightly above average as a positional group. They looked great by comparison last year to that horrific line Shanahan assembled in 2010 (in games where Haynesworth was injured or suspended). There are some solid ball players in this group, but I don’t see a single impact lineman. Which for me is a problem. One of the biggest misconceptions about the 3-4 defense is that you don’t need an impact DL, just guys who occupy blockers.

Jarvis Jenkins will be key to the Redskins defensive line being successful.

The 3-4 ends and tackles might not be as well known, but where would the Patriots 3-4 have been without guys like Seymour, Warren, and Wilfork, or the Steelers without Aaron Smith and Casey Hampton (the decline of which has led them to draft two guys in the first round in the last 4 drafts), or the 49ers without Justin Smith. Typically if you have a great 3-4 team, you have at least 1 Pro Bowl quality lineman, and that is the piece that I see lacking right now.

I only have 2 1/2 preseason games to base this on but I think they could have that guy in Jarvis Jenkins.  Since the injury happened early, the hope is he can contribute from day 1 of camp.  Plus he won’t have to be relied on every down with Bowen, Carriker, Golston and others.  In comparison I like them as much as the Cowboys 3-4 Defensive line even with Jay Ratliff.  The Eagles and Giants are tough since they are 4-3s but then you would be getting into comparing Orakpo and Kerrigan to their big time pass rushers.  And the advantage in getting to the passer right down would not be the Skins.

Now if there is a defensive collapse it will be interesting to see if Haslett sticks around and the 3-4.  That would be a tough call now that they have put two years into building it.

I really like Jenkins potential, and think he can be the best lineman the Skins have, though I still don’t know if he can be a true impact guy. My big concern is Adam Carriker, who I think is fairly overrated by Redskins Nation. I don’t think there is a single 3-4 team out there that he’d start on, and on most of those 3-4 teams he might not even be the primary back-up. I know everyone points to his 5.5 sacks last year, but he got pushed around in the running game and rarely put pressure on the QB outside of those sacks. His lack of consistency is something that worries me about this unit, because I see it in everyone.

While guys like Bowen and Cofield made some big plays, they would also go for long stretches with making zero positive impact. There’s a reason why the Redskins ranked 18th in rushing yards, attempts, and yards per attempt. Honestly a team like the Cowboys is more consistent in their production, which is why their line helped them finish in the top 10 in rushing.

You are right that it is nearly impossible to compare the Skins to 4-3 teams like the Eagles and Giants, unless you look at it front 7 vs. front 7 (which could be a good discussion question for the future). I do hope though that Haslett will stick with the 3-4 defense, if for no other reason than the fact that the Redskins can’t afford to put resources into another switch these next couple of years.

I am guessing Haslett and Shanahan are happy with what they got on the defensive line since they did not add any new faces in the draft or free agency.  Maybe they can’t get something also out of a former 1st round pick Kentwan Balmer.  It was a low risk pickup and we are due to a gift after so many of our early picks made no impact.

Boy that list is pretty depressing. My concern is we might have a few additions to that list among our current group. I don’t think the lack of addressing the line this offseason had so much to do with Haslett and Shanahan being happy, but more to do with the trade and cap penalty. Given those the Redskins had to focus their resources on only a few positions, and with the defensive line being roughly above average, they focused more on the dire needs.

In the end the Redskins need to hope that Jenkins can really be a force to separate themselves from the pack. Remember this year the Redskins face a far tougher schedule so our line will be challenged quite a bit more. Hopefully they rise to the occasion, but I’m guessing this unit ends up being about league average.