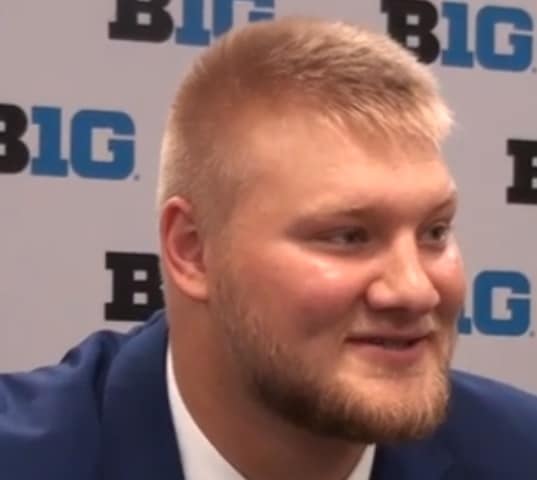 Wisconsin redshirt junior Tyler Biadasz appeared well on his way to a standout college career – as a defensive lineman.

Biadasz (6-foot-3, 321 pounds) was a three-star prospect by 247 Sports, ESPN, Rivals and Scout and was the 2015 Tim Krumrie Award winner as Wisconsin’s top senior defensive lineman after tallying 70 tackles, 7 sacks, 5 forced fumbles and one interception, according to his school bio.

Biadasz was a first-team all-state selection as a senior and an honorable mention pick as a junior. Overall, Biadasz finished his high school career with 232 tackles, 19 sacks, 11 forced fumbles and three touchdowns while also lettering in basketball and baseball.

However, he still made waves along the offensive line, earning honorable mention all-state honors for two seasons by WFCA as an offensive lineman.

But it didn’t take long for Biadasz to make the permanent switch to the offensive line after redshirting his freshman year at Wisconsin (2016).

He started all 14 games at center in 2017 for the Badgers, earning his first letter. Biadasz and company helped running back Jonathan Taylor set the FBS freshman rushing record with 1,977 yards while leading the Big Ten by allowing just 1.5 sacks per game. Wisconsin also finished second in the conference in rushing offense and total offense with Biadasz in the middle.

The following season, 2018, was more of the same, as Biadasz started all 13 games at center and helped a rushing unit rank No. 6 nationally and first in the conference at 273.4 yards per game. The Badgers also averaged the fourth-most yards per rushing attempt at 6.2. And Taylor led the nation in rushing with 2,194 yards.

It’s been more of the same in 2019 for Biadasz, as he’s started every game for the Badgers.

"They're a special O-Line, that five-headed monster of theirs."

Biadasz considered leaving school early last season and enter the draft, but the NFL’s College Advisory Committee recommended Biadasz return to school, according to the Milwaukee Journal Sentinel. He also factored in Wisconsin’s disappointing 2018 in his decision.

“It just wasn’t the right time for me to go,” Biadasz told the Journal Sentinel in the spring. “I wanted to come back and bring back a Big Ten championship and a national championship. I just wasn’t done here yet.”

It appears he made the right decision, as Pro Football Focus’ top-rated center last season (88.7 grade) has seen his name in either Rounds 1 or 2 in most 2020 NFL mock drafts.

“He’s a good athlete who is already advanced technically,” Kiper writes, also touting Biadasz’s ability to pull and athletic ability to get on the edge.

ON THE CLOCK USER DATA:

​
Get the football tools you need delivered to your inbox