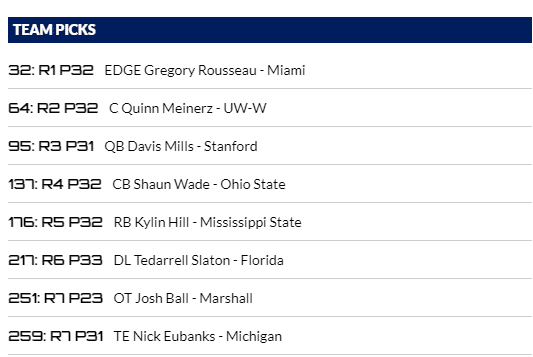 It is NFL Draft crunch time! Which means we are going to do a mock draft for all 32 teams using On the Clock of course! We will be using On the Clock Premium or Ultimate GM in these simulations, which you can upgrade to an annual subscription here!

These simulations will help give fans an idea of how the draft can play out for their team and give different scenarios to debate. So, enjoy and happy NFL Draft week!

Remember we will have On the Clock LIVE for Rounds 1-3 on Thursday & Friday nights of the 2021 NFL Draft! So you can still draft LIVE based off real-time results!

On the Clock Premium simulation summary

Tampa is in a great spot here, they won the Super Bowl and basically brought back their entire roster. This is not a team that has a lot of needs, and they also have all their picks. They can just really go for value for the most part.

Rousseau is a really good pass rusher and adds to an already impressive group. He probably would only be a rotational guy as a rookie, but would start by year two. Meinerz might be a small school guy, but he has shown that he can play at a high level. Again he might not need to start as a rookie, but the upside is there.

At some point Tom Brady will hang up his cleats, so landing a potential replacement in Mills makes a lot of sense. I see both Wade and Hill as guys who can be role players as rookies as well.