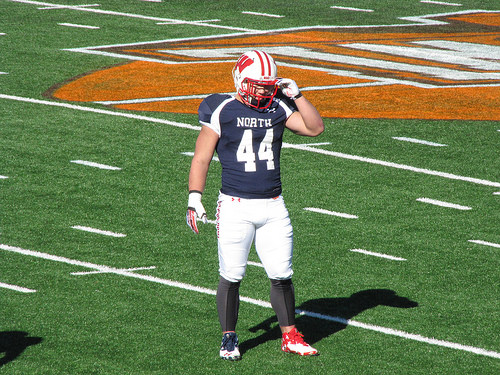 Thank you everyone for your submissions, there were so many great ones to choose from this week, with nearly 3,000 submissions. The Giants really need help with their linebacker corps so if they get a shot a Khalil Mack this is a no-brainer pick for them. Now some will say that Mack is a “lock” to be off the board by the time the Giants are on the clock, but while he’s rated higher he does have a decent chance of falling. Teams could go QB crazy in the top 10 picks dropping a couple of guys who should be drafted much higher. Mack being a small school guy is definitely a guy who could drop a few spots. With Mack on board, Shane does a great job with his next couple of picks.

Antonio Richardson can play either tackle spot and could allow Justin Pugh to kick inside, improving two positions for the Giants. Also, if Beatty doesn’t improve from his poor 2013 campaign, the Giants could view Richardson as a long term LT option.

Fuller in the 3rd round would be a big boost to their secondary, and give them a high upside corner. I really like the pick of Hyde in the 4th round for the Giants as well. New York needs to have an effective running game to win football games, and with David Wilson and Andre Brown both having serious injuries in the past year, depth is key. Hyde could be the power back in the Giants offense, a role that has thrived over the years.

Picks like Chris Watt and Ryan Grant are nice late round values to close out the draft. One of the most obvious and desperate needs in this draft is the Dolphins and fixing their offensive line. Even ignoring all the drama surrounding the Dolphins, their line was a mess plain and simple last year. Ryan Tannehill was sacked 58 times and he didn’t have a lot of clean pockets to work with. This draft fixes that by grabbing three offensive linemen. Martin and Moses give the Dolphins two top 50 picks to help rebuild this line and both players offer some versatility. Martin or Moses could be both in line for consideration at either tackle spot and Martin also has the ability to play guard as well. Though a 7th rounder Trai Turner is a guy with a lot of upside and is a great sleeper pick in this draft. He’s got the potential to be very good, but will fall due to inexperience and consistency question marks.

In addition to fixing the line, this draft hits on a number of bigger needs for the Dolphins. Chris Borland could help Miami fix a big free agent mistake of Dannell Ellerbe, and offers tremendous upside for Miami. Hyde would be a nice pick here for the Dolphins as they could pair him with Lamar Miller and help give Ryan Tannehill a rushing attack to balance out his offense. Exum is another interesting pick as he has the skills to go much higher, but injuries will bump him down. If he checks out medically though this is a great pick-up. The Redskins have to protect RGIII and have quite a bit of dead-weight among their current offensive linemen, so adding some quality starting linemen is a must for the Redskins. Grabbing a pair of day one starters in Kouandjio and Swanson would be one way for the Redskins to fix their OL woes. Both players succeeded at a high level in the SEC and would be great options for the Redskins going forward.

Another major need position is inside linebacker where currently only 3rd year Keenan Robinson is on the depth chart. Robinson is coming off a lost season due to injury so he’s hardly a guy who can be counted on. Skov gives the Redskins a quality linebacker prospect that shows great instincts and should play early on.

Later in the draft Bill grabs three intriguing guys in Reid, Richardson and Duncan. Richardson could be a sub-package corner and special teamer while Duncan can replace Logan Paulsen who is another guy on the chopping block. Reid is considered undersized for a 3 man front, but he’s a strong smart player with a lot of upside.