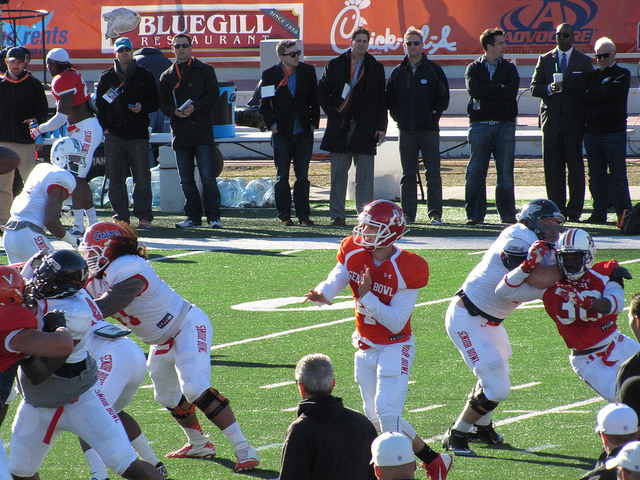 -Carr had plenty of hype and buzz entering the week of course, but after his performance and leadership he looks like far more of a lock for the first round and could still be in play for the top QB spot. Carr answered every question asked of him and proved a lot of his doubters wrong this week. -Ford will almost certainly be a 3-4 rush linebacker at the next level, but here he was asked to play with his hand on the ground. Ford was extremely explosive and was a nightmare to try to block one-on-one. He will be shooting up draft boards and went from a 4th round pick to a top 50 guy.

-Jones was the swiss-army knife of the South squad this week lining up at all three 4-3 LB spots and getting a chance to rush the quarterback in pass rushing drills. He held up well at every position and showed great versatility. He can fit into any scheme and actually can play multiple positions. So if you are a 4-3 team with a top guy at SLB, you can play Jones at the Will or Mike positions. This basically puts him on every team’s draft boards for that 2nd-3rd round range.

-There is always question if a college pass rusher can hold up at the next level, well Van Noy answered a number of those questions in pass rush drills this week. He showed great burst and and speed into the backfield and was a tough guy for the South team offensive tackles to block. Every year teams are desperate for pass rushers so Van Noy could jump up quite a bit and is likely heading for a first round selection.

-Jackson was a guy who some people loved and others seemed to shy away from him. After this week it is unlikely that many scouts are looking to shy away from Jackson. He was very physical on the interior and held up extremely well versus the top defensive tackles on the squad. He could push for  the 2nd round, but now looks like a 3rd round lock.

-There were a lot of questions surrounding Moses entering this week, but he answered the questions asked about him. He’s not the prettiest pass blocker out there as he lacks quick feet and will be typically viewed as a RT, but he gets the job done. He was the most consistent South team edge blocker this week. He should firmly be in the 3rd round discussion at this point.

-Aikens coming from a small school didn’t have a lot of buzz entering the week, but he left with a fair amount. He has nice size and shows good coverage and ball skills. He’s still a bit rough around the edges, but this was a positive week for him and he could sneak into that 4th round range after this week.

-Stork had tough competition facing him on the other side of the ball facing him this week and he was being compared to his teammate, Travis Swanson, the top center in the draft. Despite those challenges, Stork had a really nice week. He showed good technique and a nice anchor. He may not be a day one starter, but he’s got the potential to start early on.

-Johnson came into the week looking like maybe a 5th round prospect and a guy who would clearly have to be a guard at the next level. He weighed in smaller than any other offensive lineman, and it looked like there was no way he could hold up versus these strong tackles and ends. Johnson looked really good throughout the week playing both tackle and guard. He also got a little time playing center as well increasing his versatility. Some teams still might want him to bulk up some, but with his level of play and versatility he helped himself quite a bit this week.

-Hubbard had a good deal of success at Alabama and looked to be a good top 3 round linebacker coming into this draft. He had a rough week though and really didn’t distinguish himself in any area. In some pass rush drills he showed nice burst and was able to generate some pressure, but other than that it was a disappointing week for Hubbard. He was easily blocked out of the play too often, and really didn’t make much of an impact. He’s got nice size and decent range, but probably not an impact guy anytime soon.

-Davis had a good deal of hype after he won the game over Alabama on his return for a TD off the short field goal. This week though Davis has been exposed quite a bit. He’s got nice speed and quickness, but the instincts aren’t there and he’s not physical enough to match-up with receivers at the line. Davis played with poor technique throughout the week and was frequently out of position. This forced him to use his hands to grab receivers quite a bit. He would have been called for a number of penalties at the next level and that has to be a big concern for NFL teams. His special teams ability will ensure he’s drafted, but he might never be a strong option defensively.

-Davis came in with some nice promise as a 3rd or 4th round receiver, but he really had a rough week. He had major drop issues both Monday and Tuesday and he struggled to separate for much of practice. He bounced back later in the week, but the inconsistency is there and it will clearly cost him. Davis was also hurt coming in two inches shorter than his listed height at Texas, which won’t help his case.

-McCullers has tremendous size for a nose tackle and was a guy who had a good deal of hype coming into the week. Unfortunately he is wildly inconsistent and far too often was stood up by a single blocker (usually it was his own doing by not playing with leverage). If he can correct some things he could still be a very good NFL player, but he’s a bit of a project/role player at this point and looks like a guy you might take in the 5th round.

-Ikard wasn’t exactly considered a top prospect heading into this game, but the hope was he’d prove his doubters wrong. He plays with really nice technique, but he really lacks any sort of anchor. He got overpowered throughout the drills by a variety of defensive tackles. He’ll still get drafted, but it will likely be in the final rounds.