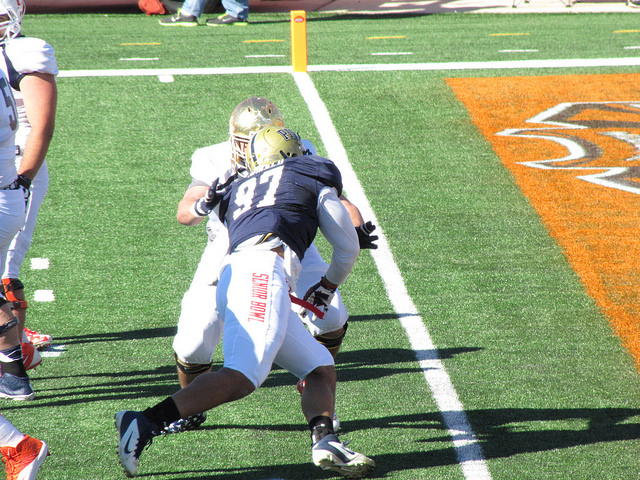 -Donald has been the most dominant player down here at any position on either squad. There are going to be a lot of NFL people who question Donald’s size, my guess is offensive linemen won’t be among them. Donald has been an incredible force all week and will possibly crack the first round. Even in the 2nd round he shouldn’t go any more than 10 picks into the round.

-Borland is another guy who is considered small by NFL standards, but his level of play just can’t be ignored. Borland shows tremendous play recognition and instincts and fairly good athletic ability. Yes he’s short and a few teams may knock him for that, but the guy can just flat out play. Some teams could consider him in the 2nd round, but he’s more likely a 3rd round option.

-Thomas entered the week and it looked like he would be playing out of position. Conventional wisdom among the scouting community was that Thomas would have to move inside to guard to have any NFL success. He looked like a 4th round prospect at best, and he might get exposed during his OT reps. Thomas though showed that he’s extremely capable of handling tackle duties and though he could be a guard as well (and succeeded in that role down here), the fact that he has this versatility really helps his stock. He could enter the discussion in the 2nd round and definitely looks like a 3rd rounder at this point.

-Larsen was probably going to be drafted on most boards heading into this week, but it looked like in that 6th-7th round range. He wasn’t helped with the weigh-in where he had short arms. What did help him though was his stellar week of practice. He was one of the toughest opponents for the North’s top defensive tackles (including Donald), and more than held his own. He definitely moved up draft boards and teams aren’t going to be nearly as concerned about his short arms at this point.

-Gayle actually had to leave practice early after suffering an injury on Wed., while here though he opened up some eyes. Gayle showed a nice projectable frame and good explosion off the ball. He might not time out the fastest at the Combine, but he utilizes his speed with his technique and football IQ. Gayle is also relentless in his rushing and teams are going to love his work ethic.

-There were a number of bigger corners down here this week, and Jean-Baptiste separated himself to prove that he’s the best of the bunch. He’s got great size and really long arms that he uses well to lock up receivers in press coverage. Jean-Baptiste has shown good speed and if he tests well at the Combine he could be a top 75 pick.

-Ward is a local kid and it seemed like he was perhaps at the bottom of the safety tier on the North roster heading into this week. After a top week of practice though, Ward looks to be the best safety here and has really good instincts and ball skills back there. While initially he looked like a late rounder, he could be looking at a top 100 spot and may even crack the third round. -The first four quarterbacks are set, but after them it’s up for grabs who comes next. Many thought Boyd could be that guy and would be a 2nd round pick, unfortunately not much went right for Boyd. He measured in shorter than expected and then proceeded to have a pretty poor week. His accuracy and decision making were off and he just didn’t wow anyone with his throws. He’s out of the 2nd round discussion and is probably falling to the 5th-7th round range.

-Jones had a really nice chance here to showcase himself and move up draft boards with a big week. If he could be the most impressive player here with this tackle group he could jump into the high 2nd round discussion. Unfortunately it was a mixed bag for him and he rarely distinguished himself. Almost all the other tackles from both teams had better weeks than he did. Jones still should be taken in the mid rounds, but he’s clearly fallen some.

-Not a great week for any of the North quarterbacks. Morris actually probably had the worst all-around week of the three, though his draft stock wasn’t too high to begin with. It’s in a bit of a free-fall at this point and he could be looking at a 6th or maybe 7th round pick. He’s got a live arm, but the mechanics and decision making are off.

-The safety position is wide open at this point and after the top 2-3 guys anyone could be in those next couple of spots. Dixon was a guy who many thought could rise up and be say the 4th or 5th safety drafted and perhaps even be in the top 75 picks. Now that no longer looks to be the case after Dixon had an up and down week in coverage. He’s still got some potential and should be drafted no later than the 5th round, but his stock is pointing down at this time.

-Linder has had a rough week dealing with all the top defensive tackles on the North roster. He was considered a late round guy to begin with and may now be looking more like a seventh round spot. He doesn’t have great size or projection to help him out either, which hurts.