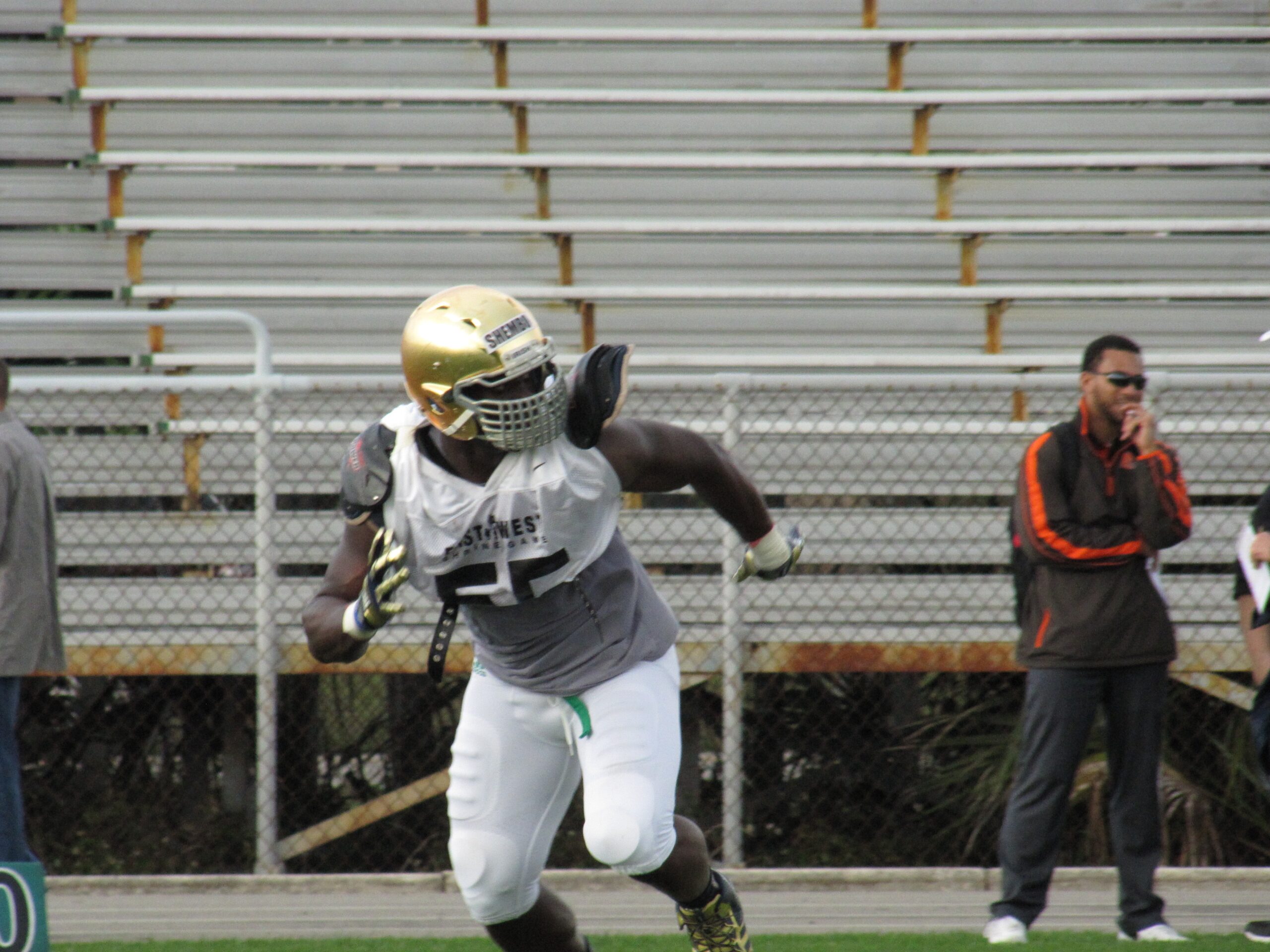 -Wenning continues to be the only draftable quarterback on the West roster as Keith Price and Tommy Rees have shown they aren’t NFL quarterbacks. Wenning is not without his struggles as at times his shoulders comes open and his accuracy really struggles, but overall he’s done a nice job. He’s got solid size a good strong arm, and shows at least functional mobility.

-It’s always tough to judge running backs without full hitting, and it’s even more so when the West practice is mainly a glorified walk-through for half the practice, but Flanders continues to impress in little ways. He shows nice bust and ability to cut that could translate to the next level.

-For a small school guy, Brown continues to hold his own versus more well known cornerbacks. Brown shows nice route running ability and uses it to get separation on intermediate routes. He’s not a complete receiver, but as a slot guy he can get open which is the most important thing to look for.

-Reedy continues to be the best receiver on the West roster and shows the best combination of hands, route running and speed. Reedy’s job (as with all the receivers) is made more difficult due to poor QB play, despite that he is the one most consistently open and making catches.

-I thought Jones had his best day, and challenged Reedy for best receiver at practice. He did a nice job fighting off press coverage, and ran really crisp routes today. He also made some nice catches today, even when he didn’t have separation, including one on the sideline that he had to go up for and take away from the defensive back.

-Bosler is the most physical of the West tight ends (and probably of the entire Shrine Game). While he needs to get better separation in the passing game, he looks like a quality blocker in run support.

-Offensive line wasn’t a big focus of mine today, but Wentworth really stood out from what I saw. He’s very technical in his approach and does a good job of taking his man out of the play. In pass blocking he’s quick to get into his stance and anchor, he’s not one to give a lot of ground. Run blocking he’s quick off the snap and shows good drive.

-Probably a slightly better day for Ikard today, but still he struggles versus power. He shows good technique, but against power tackles he struggles as he can’t anchor against their strength. He’s going to get eaten alive by nose tackles at the next level. With some of the technical work already there teams could look at him as a red shirt guy who is on the practice squad or inactive list each week and bulks up in the weight room.

-Wilikes doesn’t do a lot to standout, but he also doesn’t seem to make too many mistakes. I noticed him yesterday but didn’t write up on him, but in seeing more the same today I thought it was worth mentioning. He’s a solid center prospect who handled power rushers pretty well. He uses his hands to keep a defender at bay and has a solid anchor. He might not really profile as a starter, but he can probably find a back-up role in the NFL.

-Graf looked improved today, as he did a nice job of riding pass rushers away from the quarterback. He’s got good size and strong arms and showed today that when he uses it correctly he can be pretty effective. He’s probably going to fall into the dreaded “RT only” category, but there’s some potential he could start there one day.

-Mauro continued to be one of the most impressive defensive ends here. He shows good hustle and wins a number of battles on the edge. While an underrated part of his game, Mauro show’s nice speed and burst for a player his size (276).

-Ellis continues to be the most physically dominating of the defensive tackles, he drives back the blocker on almost every one of his rushes and shows a nice ability to shed the block as well. Ellis is quick off the snap and uses his power to bull rush linemen into the backfield. He will appeal to all teams, but 3-4 teams looking for a nose tackle should take the most notice.

-Hopkins didn’t have as strong of a practice today. he is a solid bull rusher and can be tough to move off the line of scrimmage, but he needs to play with better awareness. At times he ran himself out of the play and the lineman only had to redirect him away from where the ball was going. He also lacks versatility to do much else beyond a straight bull rush. -Allen was slightly down from yesterday’s practice. He shows nice nose tackle potential, but consistency is still a factor, on some plays he’s just too invisible and that is without being double-teamed. When he’s on though he can be a force in the middle and clog up those running lanes.

-Uzo-Diribe impressed today with some really nice burst from the edge, we saw some of this yesterday as well, but he continued showing off his pass rush skills today. He has nice speed, and a quick first step that helps him get an edge on a tackle. Also, if the tackle over-commits to the outside, Uzo-Diribe shows a nice ability to cut back inside and get to the quarterback. He flashes a lot of ability as a pass rusher, but he’s unlikely to do much in run support as strength doesn’t seem like a big part of his game.

-Marsh shows nice length and quickness off the edge again today, though he was forced out of practice at the end with a minor tweak. Marsh has shown well versus both the run and pass, though he appears to be ahead as a pass rusher.

-Bullough had a really strong day of practice, particularly in coverage where he broke up a couple of passes and made a nice interception late in practice in full team work. Despite questions about his size, Bullough has moved well and hasn’t given up too much separation in coverage. Where he really shines though is as a leader on defense. You can see the rest of the defense rallies around him and how he talks with them even when he’s not in on a play. Bullough diagnosed a couple plays really well, but one that stood out was a potential flare pass to the running back in the flat. Bullough saw it developing, and jumped the route and forced the quarterback to double clutch and throw it away. It was a quick reaction play at a time when they were simulating a two minute offense.

-Starr really impressed today, and was all over the field. Despite being a smaller school guy he is really impressive in coverage and has really nice size. Starr made a number of big plays in coverage today including a nice interception along the sideline. Even on the couple of times where Starr did give up a catch, he was in position to make a play and limit yards after the catch. -Shembo had a really good day of practice, he showed nice quickness and recognition in coverage, and did a good job against the run as well. In a very deep linebacking group it can be tough to get noticed, but Shembo was in on a number of plays today and got plenty of compliments from the coaching staff.

-Benwikere has looked good in every practice, but this was perhaps his best day. He’s got good size and decent speed, but what really separates him is his instincts, he has great timing on breaking on the ball and knocking the ball away. Despite good size he’s not the most physical corner, but he does well versus smaller receivers and looks like he can handle the slot.

-Jackson is not a corner who is going to constantly “wow” you, especially not from a athleticism standpoint, but he consistently is around the ball and shows good instincts. On one deep throw where the quarterback slipped and the ball was going to be underthrown, Jackson saw it before the receiver and came back for it to intercept it. It might have been a bad pass, but Jackson showed the better recognition and boxed out the receiver to get the pick on a jump ball.

-Richardson continues to look to be the best corner on this squad, he plays very aggressively and doesn’t allow much separation. He does a nice job breaking on shorter quicker routes and staying with his man down the field. Richardson also has nice ball skills and has come away with a couple interceptions this week.

-This was a really strong day for Byndom, as he showed well both in man and zone coverage. Byndom challenged receivers all day, and overall did a nice job re-routing them and forcing the ball to be thrown elsewhere.