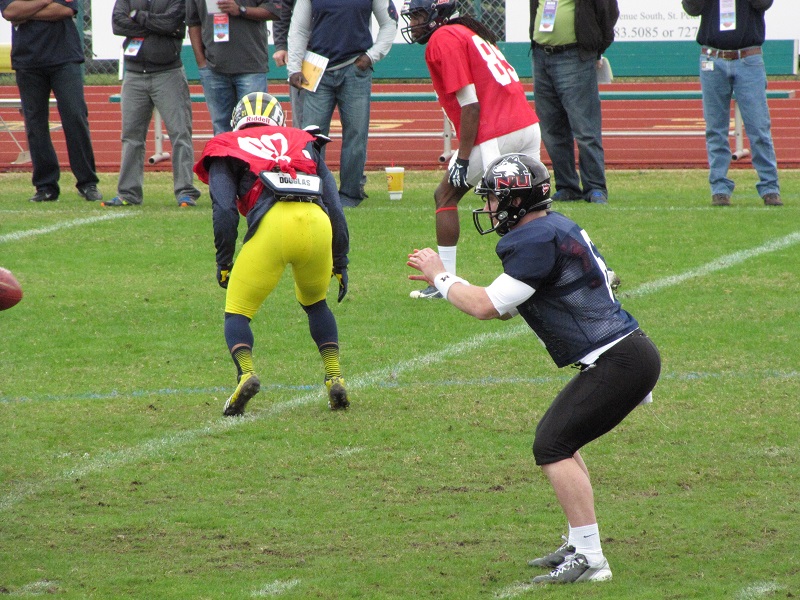 Day 3 East Practice Report: Due to travel and weather this was my first look at the East team coached by Jerry Glanville. Glanville really runs a good crisp practice and offers plenty of info for scouts to gather from his practices. There was a lot of hitting, as well as a good tempo. We saw a variety of situations and plays to help get a good balance of information. Here are my notes from today:

-Really had a great day throwing the ball, shows really nice touch on his passes and can dial up the heat when throwing into a tight window. Ran a couple of real nice rollout passes where he sold the fake and delivered a nice catchable ball for his receiver/tight end to get some nice yards after the catch. You can see the potential for him to be a sleeper quarterback who ends up a starter down the road.

-Lynch throws the ball pretty well though you can see he’s most comfortable with quick throws when he can get the ball out quickly. His footwork isn’t the greatest, but it’s not necessarily as bad as you might think given the type of offense he was in. Lynch also showcased his running ability on some red zone plays, including a nice QB draw for 15 yards and a score.

-Mathews had a good day of practice, though definitely behind Garoppolo as a thrower. Still he showed a nice arm and delivered a number of good balls down the field. His throwing motion is a little slower than you’d like to see and one time that led to a “sack”.

-Didn’t watch the running backs too much today, but Neal did have a couple of nice runs. On one draw play he saw the original hole was filled by the linebacker and he made a nice cut to take it outside and get a big gain. He ran low and showed a good burst throughout practice.

-Gallon is going to have to make a living as a slot receiver, but he just might be able to do so. He was able to get some nice separation with his route running and quickness and showed some nice YAC ability as well.

Hazel was really impressive today, making some big time catches against some of the best corners on the squad. He showed both really nice deep speed and some crisp route running that earned him some separation. On one screen pass he juked past a defender and got the side line for an easy score.

-Hurns has some deep speed and caught a couple of nice balls, but he had some trouble coming away with the catch when the defender was there. On one throw from Mathews, Hurns had a clean look and the ball was there but he couldn’t come down with it.

-Didn’t watch the tight ends too much today. Jackson stood out unfortunately for a couple miscues. He missed a couple blocks that blew up some plays for the offense. Also had a bad drop on an easy crossing route. It was a clean throw and Jackson had separation, but he couldn’t complete the play.

-In between day for Kerin, he did some nice things with how he anchored and stayed with blocks, but a couple times he got walked back to the quarterback. While he didn’t give up a big sack or anything like that, a couple of times the quarterback would have had to escape the pocket.

Stone had the best day of any offensive lineman, routinely winning one on one battles and stopping even the top defensive linemen. Stone displayed good quickness and anticipation. He could mirror defenders and used his hands really well. I liked the way he anchored and rarely gave up any ground.

-Urschel had an up and down practice today. He struggled some in the individual drills, especially when facing off with some of the better interior defensive linemen. In team drills he seemed to improve and didn’t allow as much penetration. His footwork was okay, but could use improvement.

-Bromley is easily the most active defensive lineman on the East squad. He’s causing havoc in the backfield on the majority of his snaps (either in team or positional drills), and is breaking double teams. He’s showing good leverage and using a quick first step to get into linemen before they have a chance to anchor. Bromley brings a lot of power and uses his hands to get off blocks.

-Clarke looks the part with good size and a nice frame and he doesn’t disappoint with his level of play. He had a number of nice rushes today and made some big plays. One play in particular they were working on red zone defense and he snuffed out a screen play and got them for a loss. It was good, quick recognition, by Clarke and saved a potential TD.

-Kerr is a bit raw overall, but I liked the push he got in the interior of the line. In a 3 on 2 drill (three offensive linemen vs two defensive linemen), twice I saw him break a double team and get pressure on the quarterback. Another time in full team drills he blew up a running play in the backfield and got the back fora loss. He needs to be more consistent, but you see some nice potential in his game.

-Wynn is listed as a defensive tackle, but at about 268 lbs he’s really an end and that is where he saw his work today. He’s got really good size and is pretty quick off the snap. He’s not the most refined pass rusher, but he’s got a good burst and challenge the edge, but also brings some strength to walk back the tackle. He also showed great hustle running down the line chasing the ball carrier on a couple of occasions, also liked that he ran after a receiver who caught a screen on the opposite side of the field and was running down the sideline. He had no shot of catching the guy, but it’s nice to see the hustle on the field.

-Jackson is a short stocky linebacker with a nose for the football. Though he doesn’t possesses great speed, he makes the most out of it with good angles to the ball carrier or running with tight ends. In a short area he can cover pretty well, it’s the deeper area that will give him trouble. His best skill though is clearly his run defense, where he made a number of nice plays today filling holes and blowing up plays.

-Linebackers weren’t a big focus for me today, but Boyd showed up on a more than a few plays in full team drills. He read one screen perfectly and got off the block from the tight end to make the play. He displayed better athleticism than I thought he had and could perhaps be a SLB at the next level.

-Didn’t get the chance to watch a lot of Carson today, but did notice him fill the hole on a couple of running plays. One of those he missed the tackle, but he did recognize it, and it’s not full tackling so had he been able to dive at the ball carrier he might have made the play for a short loss.

-Johnson got the chance to work as a 4-3 end today and flashed some natural pass rush ability. A couple times he was stopped, but overall he showed good burst from the edge and a nose for the quarterback.

-Boston clearly showed that he was the best safety today, as he showed good reactions to both run and pass plays. He ran easily with all the tight ends and helped out in deep coverage as well. He has starting potential (maybe not as a rookie) and is one of the higher upside players in this secondary group.

-Lawson really struggled throughout practice and wasn’t able to keep up with a number of the top receivers. He was slow to react on a couple of occasions, and other times he was just plainly outmatched. This was not a good showcase for him at all today.

-It’s easy to see a lot to like with Desir, with his speed and size really shining through, but it’s also clear he’s maybe a bit more raw than some of the other prospects. Desir showed a lot of good physical tools and was very fluid throughout practice, but he was pulled aside by the coaches on multiple occasions to fix mistakes.

Ross Cockrell had a couple mistakes early in practice during 1-on-1’s where he allowed separation or didn’t react quickly enough to an underneath route, but he improved later in practice, especially in 7-on-7 and team drills. Cockrell showed some physicallity in fighting with receivers and getting off blocks to defend screens or running plays. On one running play, he got off his block and forced the back inside, and as the back was cutting back inside Cockrell punched the ball out causing a fumble. It was a good heads up play, and an underrated trait for a corner to have.

-Gaines had a great day challenging receivers, not only showing tight coverage, but knocking the ball away on multiple occasions. Despite facing some quality receivers and decent QB play, Gaines more than held his own. He rarely got beat and did a nice job flipping his hips to run deep. On underneath routes he closed quickly and that is where he got a couple of his passes defensed today.

-Hal had a really nice practice today in every area. He showed both good ball and cover skills and succeeded against a variety of receivers and routes. He showed good long speed, running stride for stride with Allen Hurns and Ja’mes Logan on a couple 9 routes. He also didn’t bite on a double-move from Matt Hazel on another play. I liked on one deep route he used the sideline to his advantage and forced the receiver out of bounds. Hal also showed good recognition on a couple of running plays as well.