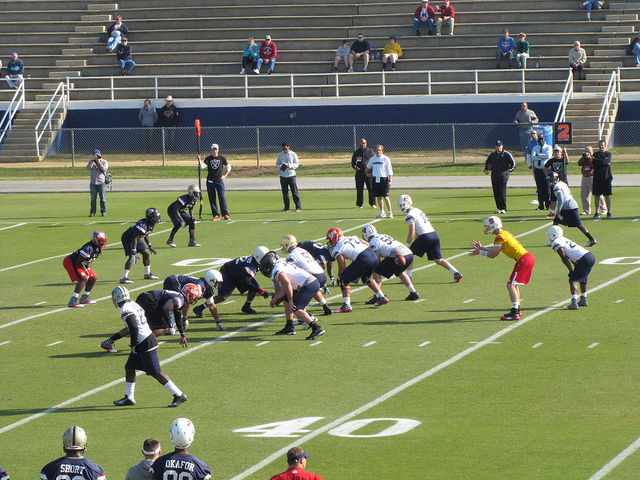 It was just shells and helmets again today and they were typically working on certain drills (two minute, inside the 10 yard line etc.) so it isn’t the best evaluation day. The linemen weren’t really hitting so little can be gleaned from them. One note, Offensive lineman Kyle Long was on the field and working at both guard and tackle after missing the past two days due to illness. Glennon wasn’t as on target today and missed on more passes than he had earlier in the week. He sailed a couple of throws in 1-on-1’s working inside the 10 yard line. He looked sloppy with his footwork despite there being no pass rush. He was better in the rest of practice hitting a couple key throws in the two minute drill, but he still wasn’t great.

Nassib looked to be the best quarterback today. He had a couple miscues himself, but looked fairly sharp overall. I liked a number of his throws inside the 10 yard line. He had nice placement on his passes and gave his receiver a chance to make the catch. During the two minute drill and 7-on-7 he looked pretty good as well. A good end to an up-and-down practice week, for Nassib who .

Dysert started off pretty well in practice having some nice throws in 1-on-1’s. He did struggle though later in practice, including a bad interception during the two-minute drill. Dysert is clearly behind the other two quarterbacks and lost a little hype this week.

Dobson had two early drops in drill work, but once he started going against live competition he put on a show. In 1-on-1’s, 7-on-7’s and team drills he had a number of nice catches. He got open quite a bit and was a favorite target of all three quarterbacks in 7-on-7 and team drills. He showed good adjustment to a couple off target throws and really put together a good final day of practice.

Robinson caught the ball better today, but he still wasn’t anything spectacular. He got pushed around by more physical cornerbacks and would have easily been called for offensive pass interference on a couple reps. He didn’t hurt his stock as much as previous days, but he didn’t help it much today either.

Wheaton had a really nice practice including making a couple spectacular grabs. While the catches were nice the route running was perhaps the highlight for him. He created some nice separation on some throws, but unfortunately the throws were off target for him to get them.

Goodwin had another really nice day, flashing his speed and route running. He was very fluid every time he cut and left more than one defender trailing behind him. He came up with a couple of big catches today and very easily should become a capable slot receiver.

Kasa continued to have a nice week catching the football, making some really tough catches in 1-on-1’s. Unfortunately you couldn’t see how his blocking was today, but he did his part receiving.

Trufant continued to have one of the better weeks of any player in Mobile. He played with good technique during the 1-on-1’s and was complimented by the coaching staff a number of times. He also came up with a big interception during the two-minute drill. He showed good speed throughout the day and was rarely fooled, something that had been a nagging issue in some earlier practices.

Poyer struggled on one of his first reps in 1-on-1’s but made up for it with a really strong practice the rest of the way. I like his positioning and the way he would break on the ball. He really displays nice ball and coverage skills and rarely let his man outright beat him. His week wasn’t as flashy as say Trufant, but he did all the little things right.

Thomas struggled some in 1-on-1’s and really looked lost at times later in the practice. He couldn’t match some of the tight ends physicality and just got beat inside too often. While he was trending up quite a bit, it’s been a week that has brought him back to earth somewhat.

Huge day for McDonald, he looked great in 1-on-1’s, he did allow one catch, but his coverage was great the quarterback (Nassib) just made an excellent throw. He flowed to the ball well in other drills and really was strong in every area. You saw good angles and awareness which were the two biggest concerns coming into this week.