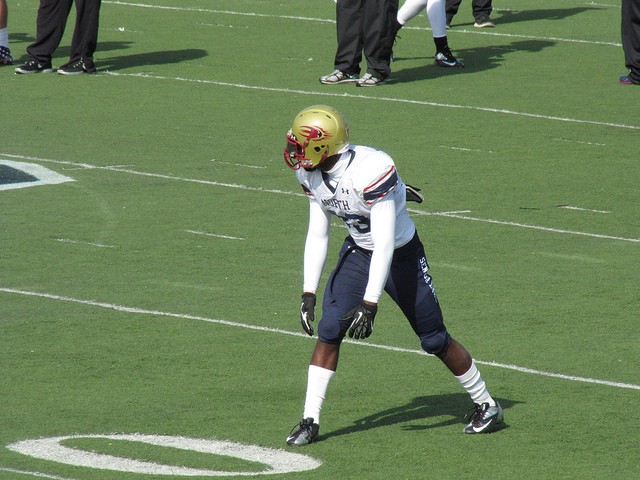 Aaron Mellette came from FCS Elon, but has shown himself to be one of the best receivers at this year’s Senior Bowl. Despite not having a big name, Mellette has wowed scouts and coaches all week with his ability to get open and come down with the ball. It’s a performance that will make team’s go back and evaluate him more, and compare him to some of the bigger name receivers out there in this class.

Perhaps Mellette’s performance shouldn’t come as too much of a surprise. After all he was a three year starter for Elon and amassed over 300 receptions, 4,000 yards and 40 touchdowns. Each of the last three years he’s been over 1,000 yards and had double digit touchdowns. He’s also maintained a 14.0 yards per reception average, including 14.5 each of the last two years. While some will voice concern that Mellette was just beating up on weaker competition, it is important to remember that he played with lesser talented players around him as well. That is extremely important for a wide receiver because he relies so much on having a quarterback to get him the football. Mellette realizes that he may have been overlooked given the level that he played on, but he’s here to answer those questions.

He also understands what this game means for him and his school,

“It means a lot to be one of the few guys that is privileged to come here. …Especially being the first person from my school, it definitely means the world”.

Mellette has proven his doubters wrong this week, showing that it doesn’t matter the talent facing him, he has the skills to get the football. Mellette has been extremely impressive this week in every area, but the two that have stood out have been his route running and speed. Coming from a smaller college you wouldn’t expect Mellette to be as crisp running the route tree, but every route they send him on he runs to near perfection. He is very fluid getting in and out of his breaks and runs really clean routes. This allows him to get further separation from the defender and will also be very helpful against zone coverage at the next level. The other reason Mellette is getting so open is his speed. He has shown the ability to get behind coverage and be a bit of a deep threat, but his speed really plays up in the intermediate game. He gets off the line very quickly and can get to 10-15 yard range very quickly.

While those are his best traits Mellette has shown, Mellette does appear to be the entire package. At 6’2” and 216 pounds, Mellette has a nice promising frame to play outside in the NFL. Add in the speed and route-running ability , and you have a receiver with a lot of promise.

Mellette brings a lot to an NFL franchise that goes well beyond his measurable or skill set. He’s a really good guy who can be a leader on the team.

“I am a great character guy, no off the field issues. I am a good guy in the lockerroom, and a a team player first”.

Mellette has answered the first big test on his road to becoming an NFL player with a great Senior Bowl week. He has shown that he has the size speed and skills to make it in the NFL. He’s also a guy who is dedicated and driven in his approach. With a strong work ethic and high character NFL teams should feel plenty confident in selecting Mellette in the early rounds.