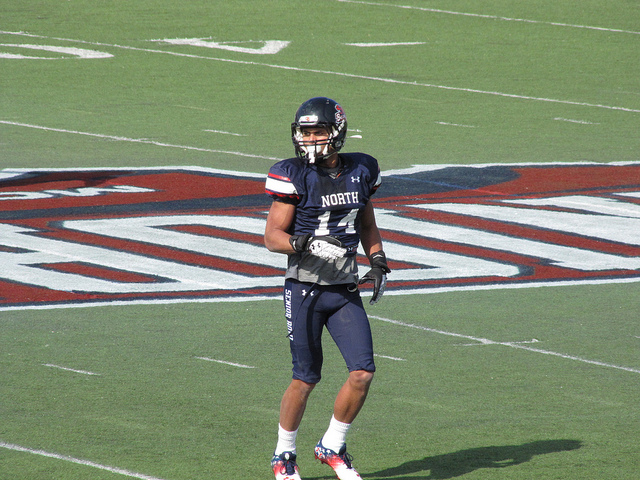 In part 1 of my North practice report I highlighted some quarterbacks and receivers that had strong days, here are the rest of my thoughts on the days practice.

Goodwin showed great speed and was really crisp in his route running as well. He missed a couple of catches, but for the most part caught the ball extremely well. My one concern with him is he jumped for almost all his catches. Granted he’s under 5’9″ and some of those he needed to jump for (note: he had a very impressive vertical), but others he needs to be able to snatch out of the air and not leave his feet.

Dobson had a good all-around practice though he did leave due to injury for about a third of it. When he came back though he looked back to full strength as he showed good speed and quickness. I liked his hands and route running ability the most.

Lemon was a late add, but turned on an impressive performance in his first practice. He really was a nice route runner and displayed good hands. Lemon doesn’t have great speed, but did show some change of direction quickness. He looks like he could be an interesting slot receiver or possession guy.

Cave struggled some in 1-on-1’s lacking the anchor or strength to win versus some of the top DT’s here. He also had a couple poor center exchanges though without really breaking down what happened via replay it is tough to say if they were his fault or the quarterbacks.

Quessenberry doesn’t have the profile of some of the bigger names here, but he’s more than held his own. Like everyone he’s struggled some versus Okafor, Hunt and Jones, but he hasn’t made it easy for them. He shows good quickness and nice footwork overall. His punch isn’t the best, but other than that there is a lot to like for his future.

Winters had an extremely strong practice, he didn’t give up much ground and it didn’t seem to matter who he was facing. He also has a bit of a mean streak as would take guys to the ground. He showed both power and movement, though I still don’t think his feet are good enough for left tackle full time.

Disappointing practice for Wagner as he looked to be a step behind the other tackles. He won his fair share of battles, but when he lost (usually to Okafor) he lost bad. Some times when a lineman loses in a drill or scrimmage you think that it might have only ended up a pressure or QB hit (which still isn’t good), since you really don’t know always if the defender would get home. Wagner though lost his man so quickly/badly that it clearly would have ended up a sack. Some promise is there, but the footwork is inconsistent.

Pugh had a really good day overall, he fared well at times versus both Okafor and Jones (the two guys who were the standard for every OT), but he also lost them a couple of times. He’s much more a finesse blocker, who fits in a movement system. I love his footwork and athletic ability.

Fisher was pretty dominant all day, swallowing up defender after defender. He did lose bad to Jones on one play, but had no problem with him the very next go. He’s incredibly athletic and shows really nice footwork and an anchor. He’s got everything you are looking for in a starting LT and is moving his way up draft boards to the top 15.

Buchanan shows some nice edge speed, but he’s not strong enough or have any counter moves to get past any of the better tackles. Really looks to be only a situational player right now.

Very strong practice, liked how he got off the ball quickly, showed excellent power and strength inside. Showed nice pursuit and hustle on plays that went away from him.

Hill looks the part and was very quick off the snap, but too often lost leverage by playing too high. When he stayed low he usually won inside and got penetration, when he stood up he was pretty ineffective.

You can tell that there is a rawness to his game, but you can also quickly see that he has dominant potential. He has a lot of athletic ability and really good strength. Some times his play recognition or technique is off, but overall the potential is through the roof.

Really had a nice day for the most part. He had by far the best run versus Eric Fisher, running right over him. He also had some nice runs versus Quesenberry and Pugh where he showed his strength. He also got handled at times, and was quieter in the scrimmage portion of the practice.

Okafor had the best day of any defender, consistently beating his man, getting a ton of penetration/pressure. He definitely looks like he can handle staying a 4-3 defensive end, and should go in the late first round. Really liked Poyer’s practice today, he was all over the field making a number of good plays. I thought he broke on routes well, displayed a nice back pedal and flipped his hips well. He still struggled some running deep, but he’s not getting burned. He’s at his best when the play is in front of him and he can break to the ball, but he seems very capable of starting right away.

Crprien displayed nice athleticism and good hitting ability (even though it there wasn’t big hitting), he struggled a couple of times in coverage, but overall had a nice all-around practice.

Really good day for Gratz, it wasn’t elite, but I thought it was a day that exceeded expectations. He did get beat a couple times by receivers, but he also beat them a number of times as well. He showed really nice ball skills I thought.

Didn’t really wow me today in what I considered an underwhelming performance. Allowed too much separation by both tight ends and receivers on a couple of plays. Didn’t take good angles to the ball, which one time would have allowed the receiver an easy path to the end zone if the CB didn’t make the tackle. Really didn’t see many standout plays from him.

McDonald made a couple of nice plays in coverage, but for the most part didn’t have many opportunities. He did do well in some other areas though. He was probably the best at covering tight ends in man, running with them stride for stride each time, and not conceding the inside leverage. He also took really good angles in pursuit. One time on a run Barner got to the edge, and McDonald did a nice job of not overcommiting, using the sideline to his advantage.