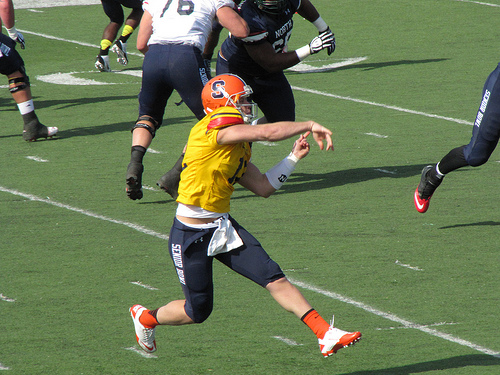 Glennon showcased his big arm with a number of nice deep throws throughout practice. He showed nice zip on the ball and probably had the best intermediate-to-deep accuracy of the quarterbacks. Despite his size he had nice overall footwork and showed some ability to move around a bit in the pocket, while keeping his eyes down field. He did underthrow a couple passes in team drills later that would have been easy interceptions. On working some of the out route throws Glennon sailed the ball well over his receivers’ heads. Overall it was a strong practice, but it wasn’t great. Nassib had a pretty good day himself, he threw a number of nice strong, accurate passes giving his receivers a great opportunity to make the play. Overall he had the best ball placement of any of the quarterbacks and was the most consistent. The only real issue about his day was he lacked the number of big plays that Glennon and even Dysert had. That shouldn’t be an overall knock on him, but you’d like to see him challenge some tighter windows given that is what he’ll see at the next level. He avoided mistakes, but the wow factor wasn’t there.

Dysert had an up-and-down day. He struggled at times with his accuracy down field, and didn’t seem to be making his decisions as fast as you’d like. On the flip side though he came up with some big plays, including one pass during the scrimmage where he avoided the sack and scrambled to his right with a defender in pursuit throwing a 20-25 yard strike to his receiver. Consistency was a big issue with him and you can see that he’s maybe a bit more raw then some of the other quarterbacks here.

Kasa had a strong practice, he’s a big physical tight end who can run. He blocked really well in team drills and gave linebackers and defensive backs fits trying to cover him. He showed nice hands and got in and out of his breaks quickly without much extra movement. It was an impressive all-around practice, and one that will make NFL teams take notice.

Robinson struggled throughout the day dropping a number of passes, even some without any coverage. Other catches he did make were balls that he allowed into his body. And on another play after making a nice catch he failed to secure the ball and the safety punched it out. He did have one really nice route where he faked out the cornerback on a double-move. Robinson also had a lot of problems fielding punts and was admonished multiple times by the Raiders coaches. He still has some upside given his natural ability, but he’s not close to being polished.

Wheaton had a strong day, showcasing really nice speed and agility. He did have one bad drop, but other than that he caught just about everything he got his hands on. He struggled a little with the press coverage, but not enough to really knock his performance.

Mellette is a small school guy, but he definitely is playing like he belongs. He was probably the best receiver on the North squad, showing good speed, route running and hands. He was good about coming back to the ball aggressively and not waiting for it to come to him. He also tracked a couple deep balls despite being in tight coverage. Given that he’s one of the taller receivers out there, the fact that he displayed good speed and quickness makes you believe he could start on the outside.

I’ll have more from the North practice later this evening!