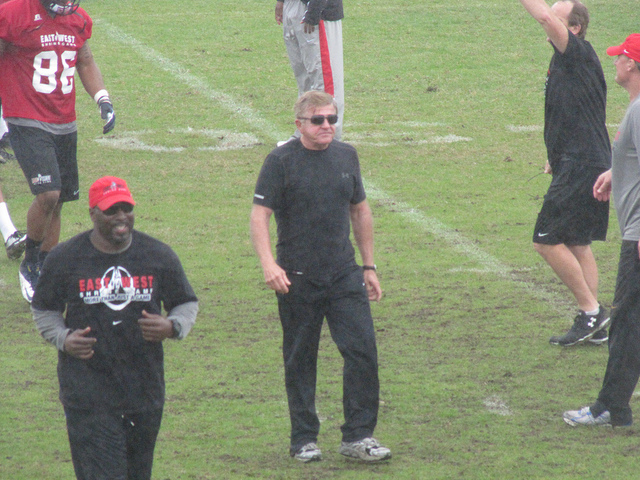 Thursday was just as walk-through day for both teams so little can be gleaned from the players not in pads, but here are a few observations: Jefferson made a couple nice catches really showing his 6’6″ 250 lbs frame, and the potential it can bring to the next level. He had an acrobatic Hail Mary catch at the end of the East practice that turned a few heads.

Klein continued to be off target on a number of deeper routes. He did well checking down the ball and not forcing it, but his throwing motion still limits him.

Bishop looks good out there in coverage flowing naturally to the ball, and jumping a few routes to knock the ball away.

Really like the quickness you see out of him, definitely think he could cover slot receivers at the next level. Displays nice instincts and ball skills.

Not a good day for him throwing the ball he was off target on a number of throws, he had far better practices earlier in the week.

Stanley looked the best out of the East QB’s, he’s a big guy with a strong arm. He also has some nice mobility to go along with that size. He still needs to work on his reads and ball placement, but this was a nice final warm-up for him.

Not a strong finish for Scott, he was off target on some throws and threw into coverage on some other ones. They did allow him to run the option some and he looked good doing it so that was a plus.

He probably had his best and most consistent practice of the week. He showed good hands making a couple really tough catches. Now there wasn’t real blocking so it is impossible to say if he improved in the thing that was bugging him the most earlier in the week. Still it was a nice performance to wrap up the week.

With no real contact it was easy for him to shine, but Williams took advantage, showcasing big speed and quickness. He’s got the explosiveness to be a weapon out of the backfield and that is what he showed.

Amos looked crisp and fast running routes and also made some nice adjustments on balls that were thrown off target. He showed good hands and some nice consistency (which is a problem among a number of receivers).

Davis had  another nice practice, one of the best ones at locating the ball and fighting defenders for it. He doesn’t have great speed, but has really nice hands and awareness.

Made one nice play, but got beat bad a couple other times. Despite being a quick guy he would let guys get behind him forcing him to grab jersey and get a penalty rather than get burnt for a TD.

It’s been a bit of a quite week for Johnson, but he had a strong final practice. He showed nice range and was quick to the ball. He broke up a couple passes and looked solid all-around.