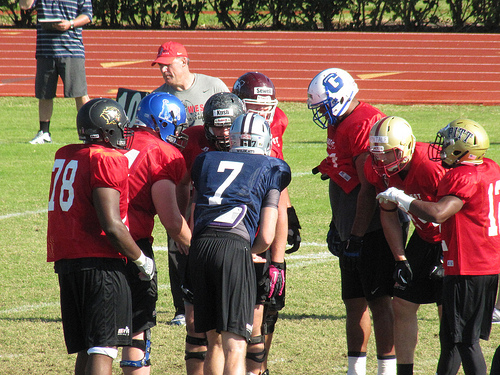 Here are some quick thoughts from today’s morning practice at the East West Shrine Game:

-Smith made a number of nice plays in coverage including a few interceptions. He showed a nice back pedal and broke on the ball well.

-Riley really shined a couple times today despite not being heralded as much as some of his teammates. He didn’t get fooled a couple times on double moves and ran stride for stride with some receivers.

-Wilson had an all-around good day and is probably one of the better cover guys on this squad. He’s fluid in his breaks and looks to have some nice potential going forward.

Francis was really quick off the snap and giving a lot of offensive linemen problems. He showed good power and consistently maintained good leverage. It was a strong day for him and definitely something that opened some eyes.

-Vellano had another good day, he’s not the quickest or biggest guy out there, but he has to be one of the most intense. Even when he “loses” a battle, he makes the offensive lineman do quite a bit of work. He’s the type of defensive lineman who will give 100% on every snap. Another point about when he does get blocked, is that I haven’t really seen him get dominated off the line. That’s not to say that every snap is great, but when he does lose he’s not getting completely pushed out of the play or blown off the line. -Klein has struggled this week with his touch passing and timing routes, and at least part of the issue can be attributed to the hitch in his throwing motion that seems to mess up the release at times. Klein though has looked really good with his zone read option runs and decision making giving him still some hope to get a shot from a team.

Turner has the size at 6’4″, 225, and he’s got decent speed, but he’s not too fluid in his motions. You can also tell that he’s not as accustomed at running the full route tree. He probably will need to add some weight and  work at TE to make it at the next level. but he could be an intriguing guy with the position change.

-Harris may be slightly overlooked due to the talent at running back down here, but he’s not a guy you can completely forget about. He runs strong and had a couple really nice runs today by finding the hole and showing good burst.

-A lot of focus this week has been on his Hokie teammate Marcus Davis, but Fuller has had a nice time down here as well. He made one really impressive catch along sideline in the end zone where it was over his head and he caught it one handed. He also showed nice deep speed and agility throughout the day.

Check back later for more updates!