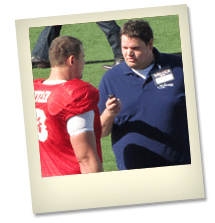 *Please Note: You’re looking at an archived post! Visit our 2013 NFL Mock Draft Headquarters for our most up-to-date mock drafts. Steve has been a diehard football fan and obsessively watching the NFL Draft since 1992 (when he was just 9 years-old). But Steve is more than just a fan who likes to follow the draft. He studies game video, analyzes players and has truly made this his calling. Besides being the Content Manager for Fanspeak.com and our resident NFL Draft expert, he was credentialed media at last year’s Senior Bowl, has been a guest on several FAN and ESPN Radio Affiliates for interviews, and a guest on other Draft related Podcasts.

Follow Steve on Twitter or Google + for news about the 2013 NFL Draft and his most up-to-date mock drafts.

-The Chiefs are going to be in the market for a new starting quarterback next year, and despite a few recent set backs, Geno Smith appears to be the top one in next year’s class. The Chiefs have a strong rushing attack, offensive line and a number of nice weapons which should make Smith’s transition fairly easy.

-The Jaguars pass rush has been non-existent this season, and that is after re-signing Jeremy Mincey and drafting Andre Branch in the 2nd round. Jacksonville has a chance to get the best pass rusher in this draft in Jarvis Jones and it is a chance they should not pass up.

-The Panthers are in disarray right now, and although the offense is the bigger culprit, the team has invested too many high draft picks and big money contracts on that side of the ball. Carolina could use a big time defensive tackle, and will land a very good one in Hankins with this pick.

-The Browns have gotten their fair share of sacks this season, but they’ve struggled to maintain consistent pressure on the quarterback. Adding a guy like Werner who is a great pure pass rusher would definitely help. Overall though it is tough to figure out what direction the Browns will go in, until we see how some of their young players perform.

-Though they could consider trading back, I think the Raiders will take a quarterback if they have one of the top two guys on the board when they select. Barkley could be the quarterback of the future that clearly Carson Palmer is not. He could legitimately restart the rebuild in Oakland and set them up for the future.

-The Buccaneers would love to add Joeckel, which would allow them to move their solid LT Donald Penn to RT where he shoudl thrive. This is the type of selection that will improve two positions, which will also have a big impact on both the air and ground attacks.

-Sam Montgomery has been phenomenal this year and would be a nice addition to a Titans defense that is lacking playmakers in the front seven. Montgomery is good against the run, but he really shows up as a pass rusher.

The Jets could use a leader for this team, and while they’d like a quarterback, I don’t see them reaching this high. Te’o though would be a great fall back option. He could be the leader and star this team is lacking, and once again get this defense up to elite status.

-Yes the Rams added Michael Brockers and Langford this past year, but could they really pass up on Lotulelei if he is there. With some extra draft picks from the Redskins, the Rams can afford to be bold.

-The Saints are desperate to generate a pass rush and should focus this top pick on that position. Mingo is an excellent pick-up here, though he doesn’t fit as well in to a 4-3 system. Even as a situational guy Mingo could have tremendous upside, on the level of Bruce Irvin and Aldon Smith of the last two drafts.

-The Colts will go defense here and could look at a pass rusher like Moore who is flying up draft boards due to his incredible instincts.

-The Lions are desperate for defensive back help and will be happy to take the top corner on the board. Milner has nice size and potential and should be able to start right away..

-Jeff Fisher knows what having a Matthews on the offensive line can do for an offense, when he coached HOF Bruce Matthews. If he has a shot to add his son, Fisher would be crazy to pass up on that choice.

-This could be considered a reach or surprise pick, but we keep seeing more teams take chances on quarterbacks with this new rookie wage scale. Manuel has big play ability and his mobility would give the Cards another look.

-The Bills need to find their quarterback of the future and could take a shot on Tyler Bray with this pick. Bray has the size and potential, but isn’t a complete product just yet. .

-This is a bit of a fall for Allen, but he hasn’t necessarily shown himself elite  yet. Also, most teams have other pressing needs ahead of wide receiver.