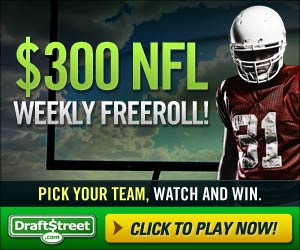 -The Chiefs are going to be in the market for a new starting quarterback next year, and despite a few recent set backs, Geno Smith appears to be the top one in next year’s class. The Chiefs have a strong rushing attack, offensive line and a number of nice weapons which should make Smith’s transition fairly easy. Play Fantasy Football in the Fanspeak Freeroll this Sunday for the chance to win great prizes!

-The Jaguars pass rush has been non-existent this season, and that is after re-signing Jeremy Mincey and drafting Andre Branch in the 2nd round. Jacksonville has a chance to get the best pass rusher in this draft in Jarvis Jones and it is a chance they should not pass up.

-The Browns do have stud MLB D’Qwell Jackson, but similar to the Panthers last year taking Luke Kuechly despite having Jon Beason, the Browns can find a way to play a stud like Te’o. Manti Te’o has big time potential and could do just as much good at an outside linebacking spot. .

-The Panthers are in disarray right now, and although the offense is the bigger culprit, the team has invested too many high draft picks and big money contracts on that side of the ball. Carolina could use a big time defensive tackle, and will land a very good one in Hankins with this pick.

-Though they could consider trading back, I think the Raiders will take a quarterback if they have one of the top two guys on the board when they select. Barkley could be the quarterback of the future that clearly Carson Palmer is not. He could legitimately restart the rebuild in Oakland and set them up for the future.

-The Buccaneers would love to add Joeckel, which would allow them to move their solid LT Donald Penn to RT where he shoudl thrive. This is the type of selection that will improve two positions, which will also have a big impact on both the air and ground attacks.

-Sam Montgomery has been phenomenal this year and would be a nice addition to a Titans defense that is lacking playmakers in the front seven. Montgomery is good against the run, but he really shows up as a pass rusher.

-This is a weird spot for the Bills to pick, as it is probably too early to go quarterback (with Barkley and Smith off the board), and they could target a couple different areas. While LB Manti Te’o is a legit option, I think adding Star Lotulelei to the interior would be huge. It’s not their biggest need, but I really like what he’d bring to their line.

-The Lions have to add to the secondary with this pick, Milner is the top corner on the board and should be an instant starter for Detroit.

-The Colts could use a lot of help on the defensive side of the football, and I think they will probably go with the the top guy on their board. At this point that should be Werner.

-The Saints defense is not generating pressure on the quarterback and that needs to be an immediate fix.

-The Jets need safety help and LaRon Landry is a free agent next year who will be looking for a mega deal. Look for the Jets to wisely pass and find that help somewhere else.

-Jeff Fisher knows what having a Matthews on the offensive line can do for an offense, when he coached HOF Bruce Matthews. If he has a shot to add his son, Fisher would be crazy to pass up on that choice.

-This could be considered a reach or surprise pick, but we keep seeing more teams take chances on quarterbacks with this new rookie wage scale. Manuel has big play ability and his mobility would give the Cards another look.

-This might be a bit of a surprise given the number of receivers the Rams have drafted of late, but Sam Bradford could use a true number 1 receiver on the outside to go along with Danny Amendola in the slot.

-This is a major need for the Dolphins who currently have the least talented receiving corps in the NFL. Robert Woods would be an immediate improvement and a favorite target of Ryan Tannehill.