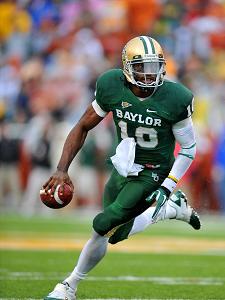 The Colts won’t debate this pick much, and even though they could auction this pick off to the highest bidder, I really can’t see them passing on Luck. Luck might not be the greatest thing since sliced bread, but he might be the most talented QB prospect in the last 10 years. The #2 pick has become a valuable trade chip for the Rams, thanks to Robert Griffin's performance at the Combine.

The Browns definitely don’t want to give up this much for RGIII, but they need a quarterback bad, and with having that extra 1st rounder, they don’t have to trade away future picks. Griffin showcased his impressive athletic ability at the Combine, but answered the biggest question, which was his height. He has the potential to be a franchise caliber quarterback, and the Browns hope he is the answer to their woes.

The Vikings could go in other directions, but it would be pretty hard to pass up Matt Kalil. He’s a franchise LT, and can help make the lives easier of both Christian Ponder and Adrian Peterson. He is the most talented tackle to come out since Jake Long, and should have a similar immediate impact.

It will be tough for the Rams to pass on Matt Kalil, but getting a pair of additional top 40 picks, should ease the Rams pain. Also easing their pain is getting the draft’s top corner in Morris Claiborne. The one good thing about the Rams having so many needs is the fact that no matter what they really can’t go wrong.

The Dolphins might be losing guard Vernon Carey this offseason, which would make them have among the league’s worst guards. Even if they were to retain Carey this could be a smart pick, especially if Miami makes a splash with Peyton Manning or Matt Flynn.

The Bills two biggest needs are CB and DE. While it is possible they could look at moving up for Claiborne or Kirkpatrick, I think they will look to stay where they are. With the top two CB’s off the market the Bills will have no trouble moving on to their other big need. Ingram would be an excellent pick here, and give them the pass rusher they are desperately lacking. Seahawks could get their QB of the future in Ryan Tannehill.

The Seahawks need to find a long term answer at quarterback, and with the way Tannehill’s stock has risen this could be the perfect pick for them. Defensive end is a possibility, but Tannehill could be too tempting to pass up. He probably needs a year to develop, but his future is incredibly bright. I think he has franchise QB potential.

The Cowboys can go in a number of different directions with this pick. If they don’t retain Anthony Spencer, then I’d expect finding a complementary pass rusher to Ware will be at the top of their list. Coples would be a fantastic fit for them, and give Dallas a devastating pass rush.

The Eagles appear to be set at WR if they do end up franchising D. Jackson, so that makes LB the top priority for the first round. A lot of people will question Hightower’s speed, but his instincts and production are hard to ignore. And Hightower showed at the combine that while he doesn’t have great speed it is above average and very playable.