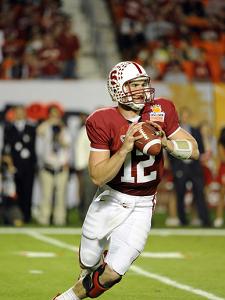 Top Quarterbacks that helped themselves at NFL Combine: Andrew Luck showed his athleticism too and showed why he'll still be the #1 pick in the NFL Draft.

Not that Andrew Luck needed any help, but he showed some incredible athleticism today in all the workout drills. Now Luck didn’t throw at the Combine, but he had as good as a day otherwise. Any questions that the Colts might prefer Griffin’s athletic ability should now be out the window.

Like Luck Griffin didn’t throw, but he was exceptional in the workouts. He ran an unofficial 4.38 (official 4.42), and had impressive broad and high jumps as well. In addition to coming in over 6’2″, Griffin looks even stronger than he did in college. He cemented his spot at number two overall in the draft and should have numerous teams clamoring to get him.

Weeden was the opposite of the top two guys, as he threw, but didn’t do any of the workouts (due to injury). Now people will want to know just how much foot speed you are getting with Weeden, so that will be important to watch at his pro day. In the throwing drills Weeden showed great arm strength and good touch on most of his throws. With so many of the top guys not throwing, Weeden really opened some eyes with his performance.

Cousins did everything, which seemed to be pretty rare. While he didn’t blow anyone away with his workout numbers, he also didn’t hurt himself by running slow. He was very impressive in the throwing drills and really had a good all-around day. He’s not going to work himself into the first round, but he might be in that late 2nd round range.

Top QB’s who hurt themselves:

Foles came in with the slowest 40 time of the guys who ran, and then had some poor throws while throwing. I think he might be working himself out of a 2nd round grade and needs to go to a team that will allow him to sit in shotgun all game.

Lower Round Guys Who Stood Out:

If Wilson was 4 inches taller he’d be a potential 1st round QB, instead he’s likely a 5th-7th round guy. Wilson tested well in all of the workouts while showing a very strong arm during the passing drills. There is a definite ceiling for how high Wilson can go, but some team will love his work ethic and natural abilities.

Davis is another guy who never really projects to be a starter, but he looked pretty solid today and could be worth a late round flyer. I probably wouldn’t take him before the 7th round, but he is at least intriguing.

Later Round Guys who hurt themselves:

Moore lacks the physical tools, size and arm to be an NFL quarterback. Even being a 3rd stringer could be a stretch for him. It was just a bad all-around day for the Boise State product.