What will Washington do at QB? Here are the 3 most likely options for the Commanders 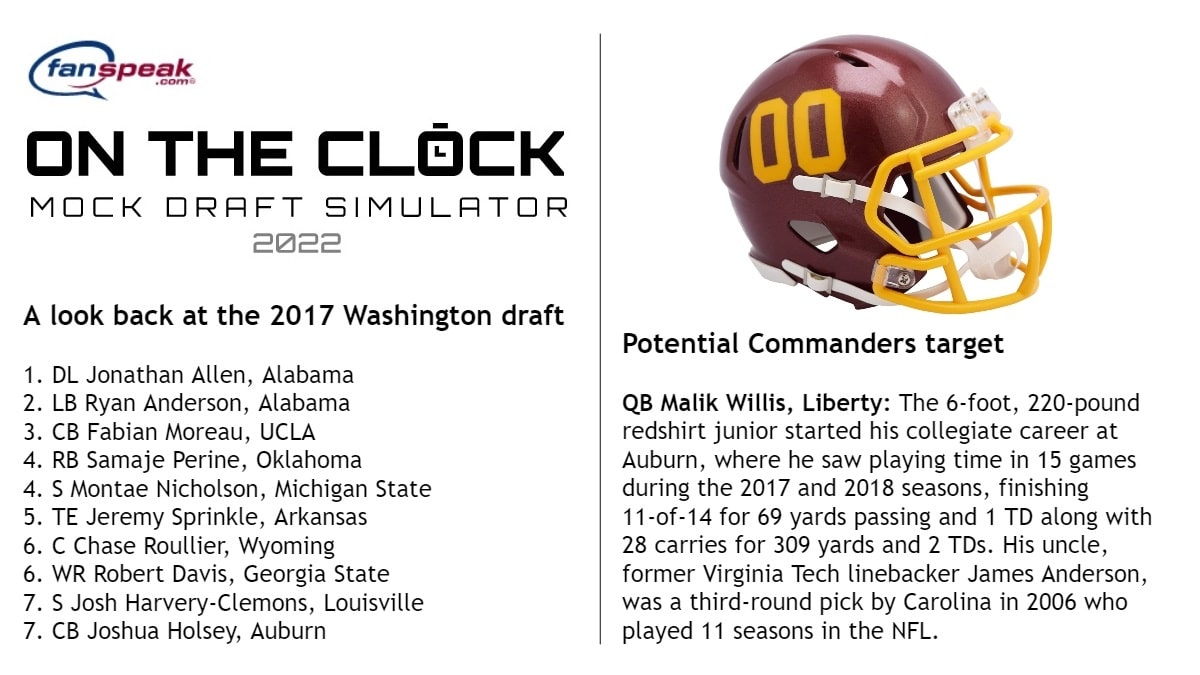 Washington is likely mulling three options for the upcoming draft.

It could be a franchise-altering decision.

Of course, the Commanders have a fourth option, too: trade down for extra picks. But that’s harder than it sounds. If a team is willing to give up a bounty of picks to move up in the draft, then it’s likely for a player Washington is already considering.

Instead, let’s focus on the top three options:

Option A: Draft a QB

The Commanders haven’t had a lot of luck drafting quarterbacks in the first round, with Sammy Baugh as the lone one to make the Hall of Fame. Baugh was drafted in 1937.

The problem with taking a QB in the first round who, for whatever reason, doesn’t pan out is that so much of the team’s resources are built around that player. Case in point: The Commanders have gone 17-32 since drafting Haskins. To be fair, there weren’t any better options at the position in the draft that year, with former Missouri QB Drew Lock the next signal-caller to go at pick No. 42 overall in the second round.

Instead, the Commanders took star pass rusher Chase Young out of Ohio State, who had a solid rookie season with 7.5 sacks, along with 44 tackles, 10 tackles for loss, 3 fumble recoveries, 4 passes defended and 4 forced fumbles. But Young’s numbers plummeted in an injury-riddled second season, as he finished with just 1.5 sacks, 26 tackles and 3 TFLs.

Herbert, meanwhile, finished second in the NFL with 5,014 yards passing along with 38 TDs and 15 INTs this past season.

Option B: Trade for a veteran QB

However, trading for a veteran QB is no slam dunk, either – and there’s a reason for that. If the player was good enough, then you’d think their team would do everything it could to keep him. That’s currently what’s going on in Green Bay, as the Packers have said they’re willing to do whatever it takes to entice Rodgers to stay.

Some potential options include:

There are other veteran QBs who could be on the market, including Rodgers, Las Vegas’ Derek Carr, Minnesota’s Kirk Cousins and Atlanta’s Matt Ryan. All would be an upgrade over last year’s starter, Tyler Heinicke, but trading for any of them would come with major risks, starting with their age (all are over 30). Say, for example, the 38-year-old Rodgers or the 36-year-old Ryan has a solid first season in Washington, but the team fails to reach the Super Bowl. Would the Commanders still have enough draft capital to be competitive once those QBs are no longer elite?

And that leaves the team with its final option: Simply take the best player available with pick No. 11.

It’s possible that a top-ranked prospect like LSU CB Derek Stingley or Notre Dame safety Kyle Hamilton falls to Washington. Or the team could turn to one of the top offensive linemen in the draft, such as North Carolina State’s Ikem Ekwonu and Tulsa’s Tyler Smith, both of whom can play tackle or guard, or even center Tyler Linderbaum.

Washington appears set at OT behind 2021 rookie Sam Cosmi and veteran Charles Leno Jr., who played the most snaps (1,121) and had the best Pro Football Focus grade (81.2) grade of any of the linemen. Lindenbaum, while clearly the best center in the draft, might be a bit of a luxury for Washington if current starter Chase Roullier comes back healthy next season. But the team could lose veteran guard Brandon Scherff to free agency, while the left guard, Ereck Flowers, has been average.

Releasing Flowers would save the team $10 million, but Washington is unlikely to release him if it lets Scherff sign elsewhere in the offseason.

That’s why the best bet for the upcoming draft might be to take either Ekwonu or Smith. Both could fill in at tackle in a pinch while starting at either Flowers’ or Scherff’s spot at guard.

And it would add yet another piece to the offensive line – and that’s important moving forward. Washington will eventually add a new starting quarterback; the team needs to make sure he has a solid line in front of him to get the most out of that investment.

What’s the final verdict? See who Washington takes in the latest Fanspeak On the Clock mock draft for the Commanders.