Does Washington take a QB this year or wait until 2023? 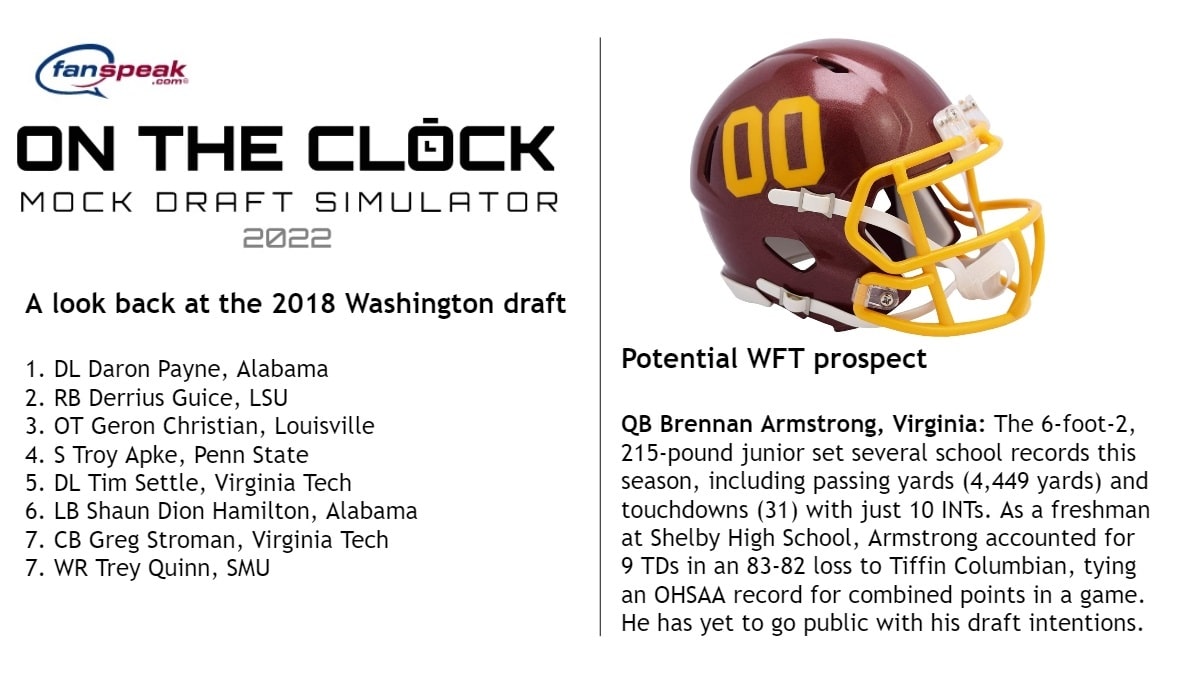 The Washington Football Team is closer to contention than some might realize.

The team enters the offseason with the fourth-best cap situation, according to Over The Cap, so it should have the money to sign some of its key free agents, most notably All-Pro guard Brandon Scherff. When healthy, the offensive line should be one of the team’s strengths. Same goes for the defensive line. The team appears set at running back and has a star-in-the-making at receiver. The defensive backfield should be better next season.

Even the injury woes the team faced this season could be a blessing in disguise, as it allowed younger, untested players like rookie fourth-round tight end John Bates to show they belong.

Quarterback, though, remains the team’s biggest question going into the offseason.

And therein lies the problem: Does Washington draft a future signal-caller in what’s been called a weak QB class? Or do they wait another year for what’s supposed to be a stronger QB class?

There are arguments to be made on either side.

If the team drafts one this year, then it faces the very real possibility that he won’t be any better than failed 2019 draft pick Dwayne Haskins, now the third-stringer for Pittsburgh.

Waiting, though, just pushes the team further away from contention, as Taylor Heinicke is probably not the long-term solution.

One more problem to sift through: Washington can’t assume the 2023 QB class will be any better.

Consider the 2019 draft as Exhibit A.

Now? Aside from Haskins:

Meanwhile, Haskins and Daniel Jones, who went No. 6 overall to the Giants, have failed to impress.

In fact, the only QB from 2019 who has had major success is the No. 1 overall pick from that draft, Kyler Murray of Oklahoma, who went to Arizona. You may recall that Murray wasn’t considered a first-round prospect until relatively late in the draft process.

The following year was supposed to be much better – and, sure enough, No. 1 overall pick Joe Burrow of LSU (Cincinnati) and No. 6 overall pick Justin Herbert of Oregon (Los Angeles Chargers) look like future stars. As for No. 5 pick Tua Tagovailoa of Alabama (Miami) and No. 26 pick Jordan Love of Utah State (Green Bay), both have failed to impress.

Aside from Jones, has Lawrence, Wilson, Lance or Fields done anything to cause their fanbase to think their respective teams are set at QB for the next decade? And who would have thought going into last year’s draft that unheralded Davis Mills of Stanford, a third-round pick by Houston, would wind up with the third-most passing yards among rookies? (Mills has a line of 2,363-13-10 and a 2-8 record.)

This year’s crop of QBs has its fair share of warts.

Say the team skips the QB position altogether this year in the hopes that the 2023 group will be better. An early look at some of the top signal-callers who will be eligible for the 2023 draft includes C.J. Stroud of Ohio State, Bryce Young of Alabama, Will Levis of Kentucky, Sam Hartman of Wake Forest, Aidan O’Connell of Purdue, Hendon Hooker of Tennessee, K.J. Jefferson of Arkansas and former Oklahoma QB Spencer Rattler, now with South Carolina.

Is Washington sure any of those players are significantly better than this year’s QB class? And is it worth the risk to wait another year?

The WFT will have some difficult decisions to make in the offseason.