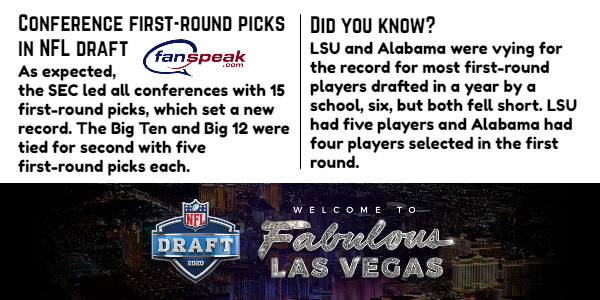 Green Bay trades for the heir-apparent at quarterback. Las Vegas takes a cornerback ranked by most analysts as a second- or third-rounder. And then there’s Seattle – it wouldn’t feel like an official NFL draft without the Seahawks taking a Day 2 player on Day 1.

The first day of the draft went off without a hitch, as there were few, if any, noticeable problems with the first-ever virtual draft.

Here’s a snapshot of picks 1-10 of the first round:

WR Jalen Reagor, TCU: Reagor was seen as one of the most explosive players in the draft, but his 40 time of 4.47 seconds was a bit of a surprise. Reagor then allegedly ran a 4.22 during his virtual Pro Day, but most doubt the accuracy of that time.

What’s not in doubt? Reagor’s playmaking ability, as he fills a major need for a Philadelphia team that desperately needed to upgrade the position. Some analysts compared Reagor to former Eagle DeSean Jackson, although there are concerns with Reagor’s “route-tree limitations.”

WR Justin Jefferson, LSU: This could turn into one of the best picks in the draft, as one former scout and coach said Jefferson was the third-best WR in this draft behind Jeudy and Lamb but ahead of Ruggs. Jefferson is a big slot who will replace the recently traded Stefon Diggs, older brother to CB prospect Trevon Diggs.

LB Kenneth Murray, Oklahoma: There were whispers that Murray could be headed to Dallas prior to the draft. Instead, Dallas took Murray’s teammate Lamb, and the Chargers traded with New England to move back into the first round to select the Oklahoma linebacker.

Murray is said to be one of the safest picks in the entire draft and should put up big numbers from Day.1

C Cesar Ruiz, Michigan: Analysts said before the draft that this is one of the weakest interior offensive line classes in recent memory. But if there was one who could go on Day 1, the general consensus was that it would be Ruiz.

And that’s exactly what happened, as New Orleans continues to solidify the interior of its line. The only curiosity is where the team will play Ruiz and last year’s second-round center Erik McCoy of Texas A&M. The early indication is that Ruiz will get a shot at the right guard position, currently manned by Larry Warford. As head coach Sean Peyton said, the team didn’t draft Ruiz to be a backup.

WR Brandon Aiyuk, Arizona State: There was a thought before the draft that San Francisco might take one of the top receivers with its pick at No. 13 (later traded for pick No. 14). Instead, the team drafted South Carolina DT Javon Kinlaw with its first first-round pick of the night.

But when Jalen Reagor and Justin Jefferson were drafted a few picks ahead of them, San Francisco felt it had to move up to snag one of the remaining receivers, and the “YAC King” Aiyuk was the pick.

Many analysts thought Aiyuk would fall out of the first round after he received core muscle surgery earlier this month. The injury was believed to be the culprit behind his 4.50-second 40-yard time at the Combine, although he’s expected to be ready by training camp.

QB Jordan Love, Utah State: We’ve seen this play out before, only this time, Love is the hot-shot rookie who fell in the draft and incumbent Aaron Rodgers is the veteran who is left stewing over the move. It remains to be seen how Rodgers will handle the situation, as he allegedly wanted receiver help in the draft. The New York Post reports that Rodgers wasn’t consulted before Green Bay traded up a few spots to select Love.

Jordyn Brooks, Texas Tech: The senior may yet turn into a long-time Pro Bowl player, and, to be fair, he was a fast-rising prospect leading up to the draft. But few pegged Brooks as a Day 1 pick, with most analysts predicting him to go somewhere on Day 2 or even early on Day 3.

His selection marks yet another curious first-round pick for Seattle. The Seahawks have only had four first-round picks – including Brooks – since 2013. Former Texas A&M offensive lineman Germain Ifedi (No. 31 in 2016) is already on his second team after Seattle declined his fifth-year option. Rashaad Penny (No. 27 in 2018) has barely played. And last year’s first-round pick, L.J. Collier (No. 29) barely played as a rookie due to a high ankle sprain.

With that said, linebacker was still a need for Seattle after linebacker Mychal Kendricks suffered a torn ACL late in the season. In other words, Brooks is going to get a chance to play early as a rookie.

Texas Tech head coach Matt Wells called Jordyn Brooks the "next Bobby Wagner" which he would know since he coaches Wagner at Utah State.

I think Seahawks fans would sign up for that.

LB Patrick Queen, LSU: One of the youngest prospects in the draft, Baltimore got a bargain when Queen slipped to them late in the first round. Many analysts said the junior was the second-best LB prospect behind Clemson’s Isaiah Simmons, who went to Arizona with pick No. 8.

The biggest concern surrounding Queen prior to the draft was his lack of experience. Queen didn’t become a full-time starter until this past season.

OT Isaiah Wilson, Georgia: Several scouts thought Wilson could have been a first-rounder had he stayed at school in Georgia. Turns out, Wilson went in the first round anyway, joining his former OT teammate Andrew Thomas, who was the No. 4 overall pick by the New York Giants. Wilson will man the right side for Tennessee and should get immediate playing time after Jack Conklin signed with Cleveland in the offseason. However, teams were concerned prior to the draft about Wilson’s ability to maintain a respectable playing weight, plus he’s only played in 25 games, with 24 starts.

CB Noah Igbinoghene, Auburn: What does the team with three first-round picks and the two highest-paid cornerbacks do in the draft? Take another cornerback, of course.

Miami, which signed Byron Jones in the offseason and who recently resigned Xavier Howard last season, drafted Igbinoghene with its last first-round pick simply because he was the top remaining player on its board, general manager Chris Grier said.

Igbinoghene is athletic, has decent size and speed and is a willing tackler. The biggest knock on him is his experience, or lack thereof, as he only converted from receiver to cornerback full-time his sophomore year. Still, one analyst said Igninoghene has “one of the highest ceilings” of any of the cornerbacks in the draft.

Minnesota entered the draft in desperate need of upgrading its receiver position and cornerback. Mission accomplished. Reagor can play on the inside or the outside.

RB Clyde Edwards-Helaire, LSU: Edwards-Helaire was already considered one of the top running backs in the draft, along with Ohio State’s J.K. Dobbins, Wisconsin’s Jonathan Taylor and Georgia’s D’Andre Swift. But what helped separate Edwards-Helaire from the pack was his receiving ability, as he finished second in the nation in receptions by a running back. This may be a bit high for the junior, but none of the top RBs were likely going to slide all the way to Kansas City’s pick in the second round.