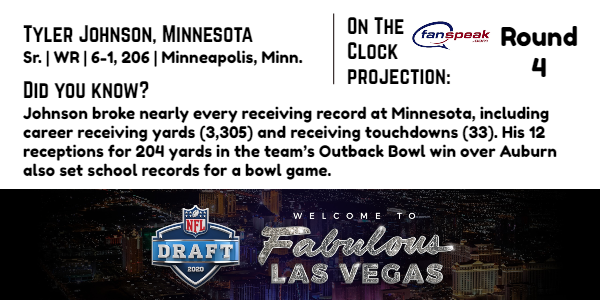 This is the perfect draft if wide receiver is about third or fourth on your team’s needs list.

As analysts have said, the 2020 WR class may lack star power, but it certainly doesn’t lack depth, as it’s considered potentially historically deep at the position. Translation: You can still probably find a starting-caliber receiver beyond Day 2.

That’s not necessarily good news for players like Minnesota’s Tyler Johnson, who could be drafted a full round – or two – lower than he would any other year. Johnson, one of the most celebrated receivers out of Minnesota with more than 20 school records, returned for his senior year and became the first member of his family to receive a degree.

And yet, despite another solid season, Johnson failed to make the Senior Bowl roster and did not participate in the East-West Shrine Bowl. He also did not run the 40-yard dash at the Combine, instead electing to run it at a Pro Day that was eventually canceled due to the virus pandemic.

Every @NFL QB would like having Tyler Johnson in his huddle.

Next week, we'll find out which one will get to throw passes to the record-setting WR.@T_muhneyy10 | @GopherFootball pic.twitter.com/GRKCwwpZot

All this has led to a player whose draft stock has lost some of its luster. Most analysts project Johnson to be drafted between the third to fifth rounds.

Still, if he lands in the right situation, Blogging The Boys founder David Halprin thinks Johnson could wind up being a steal in the later rounds.

“All this guy did was produce in 2019,” Halprin said in an interview with Fanspeak. “It’s true that he’s not the most explosive athlete and there will be limitations to his game, but as a WR2/slot guy, he could be a steal for someone.

“He’s a nice route-runner with room for growth, and is very good at catching contested balls. He is a chain-mover and a red-zone threat. His projections are all over the place but he will probably go somewhere in the fourth/fifth.”