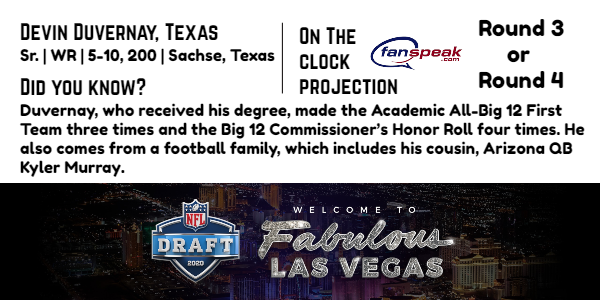 And if there was any lingering doubts, Duvernay ran a 4.39-second 40-yard dash at the Combine, tied for the fourth-fastest time among receivers.

Devin Duvernay made Grant Delpit look like a fool…
Do not want this for the birds..#Eagles pic.twitter.com/nIUwshpcoW

So why isn’t Duvernay ranked higher?

He can blame the overall depth of the 2020 receiver class for that.

When asked what round he thought Duvernay would land, Edholm said “I’d guess Round 4.”

“But if that alone doesn’t demonstrate how deep this WR class is, then I don’t know what else will,” Edholm said in an interview with Fanspeak.

Collin Johnson, a 6-foot-6, 222-pound junior, entered the season as a potential first-rounder following a solid sophomore season. Instead, Johnson had a somewhat disappointing and injury-plagued season in which he missed four games but still entered the draft.

Johnson, who is generally seen as a Day 3-receiver, suffered a hip flexor injury during pre-Combine workouts. So, he skipped workouts and planned on going through drills during Texas’ Pro Day – which ultimately was canceled due to the virus outbreak.

“I think Johnson goes later, maybe Rounds 5-6,” Edholm said. “Such different players (Collins vs. Duvernay), but to me, Duvernay has a more diverse and useful skill set all-around.