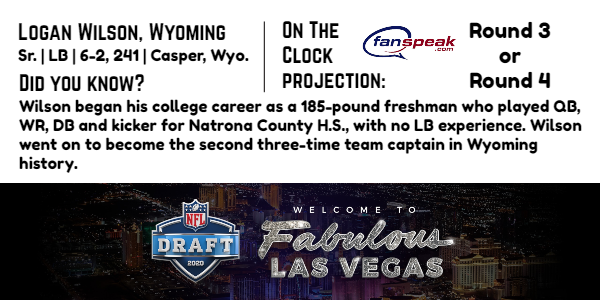 Aside from his 40-yard dash time, there’s nothing about Wyoming linebacker Logan Wilson that stands out. Most of his testing results at the Combine are in the 40th- to upper-50th percentile.

But there was nothing average about Wilson’s college production.

But those stats aren’t as impressive as this line: Wilson also had 10 interceptions in his four-year career, including four as a senior. He also had with 14 passes defensed.

By comparison, Ohio State’s Jeffrey Okudah, the No. 1 cornerback prospect, had 9 passes defensed in 2019, compared to Wilson’s 7, and he had fewer INTs with 3.

“Ultra-productive three-year team captain with instincts and cover talent to find work as an every-down linebacker. His play recognition, burst and lateral agility help him play faster than his timed speed and his fundamentals as a tackler are as good as you’ll find in this draft. Wilson needs more consistency of approach at taking on blocks and it may take him a minute to adjust to NFL game speed. He should be a core special teams member early, but possesses the tangibles and intangibles to become a productive pro as an inside or SAM (strong-side) linebacker.”

According to Pro Football Focus, Wilson earned a 90.6 run-defense grade, an 87.3 pass-rushing grade and an 81.9 coverage grade this past season.

He’s currently seen as a third-round prospect by several analysts, including Sports Illustrated’s Kevin Hanson and The Athletic’s Dane Brugler. Here’s what Brugler said about Wilson in his recently released NFL draft guide:

“With his top-level diagnose skills, Wilson is a tackling machine due to his break down ability and sound technique in the open field, mirroring with range. He rarely came off the field and as a former high school cornerback, he looks comfortable in reverse with natural ball skills.”

As passing offenses become increasingly complex, those tackling and coverage skills will prove invaluable – a big reason why, as a third-round, Wilson is the definition of a safe pick.