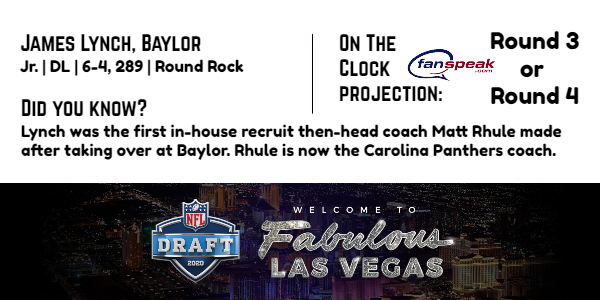 He may never lead his team in sacks. Same goes for tackles.

Still, Baylor defensive lineman James Lynch is one of the safest Day 2 to Day 3 picks in the draft. At 6-foot-4, 289 pounds, Lynch was one of the most productive linemen in college last season, picking up 13.5 sacks and 19.5 tackles for loss, and his size gives him versatility along the defensive line.

But there are concerns.

Teams might not view Lynch as a perfect fit as a 4-3 defensive end due in part to some of his athletic traits. According to Mockdraftable, Lynch’s 5.01-second 40-yard dash time (40th percentile) and his arm length (31-7/8 inches, 7th percentile) are less-than-desirable for a strong-side defensive end.

With that said, he may have to pack on some weight if a team wants to use Lynch primarily as a 3-tech in a 4-3 defense.

One of the best talent evaluators in the country gives his opinions on Baylor players James Lynch and Denzel Mims https://t.co/Fw7fcOcYqp

Otherwise, those “tweener” traits make him a perfect candidate for the 5-tech position, which is sorely lacking in the 2020 NFL draft. Lynch is currently ranked as the No. 2 5-tech, according to Drafttek.

Lynch compares favorably to the top-rated player at that position, Iowa’s A.J. Epenesa. Lynch is an inch shorter but 20 pounds heavier. He also had more sacks and tackles for loss as a senior (11.5 and 14 for Epenesa).

And Lynch has a big fan in ESPN draft analyst Mel Kiper Jr., who calls the Baylor product one of the most underrated players in the upcoming draft.

“… On defense, give me Baylor’s James Lynch, the 2019 Big 12 Defensive Player of the Year. He’s kind of a tweener tackle/end, but I see him as a 3-technique tackle in a 4-3 defense because he has some pass-rush ability. And he’s relentless. He could be a steal in the third or fourth round.”

Epenesa is considered more of a fringe-first rounder who could slip into the middle of the second round. Lynch, on the other hand, is generally mocked a round or two later than Epenesa by most draft analysts.

And that’s what makes him a safe pick.

Missing on a first-rounder can be traumatic to a team. Missing on a third- or fourth-rounder isn’t.