Safe Pick: You don’t need a 1st round RB to succeed in NFL 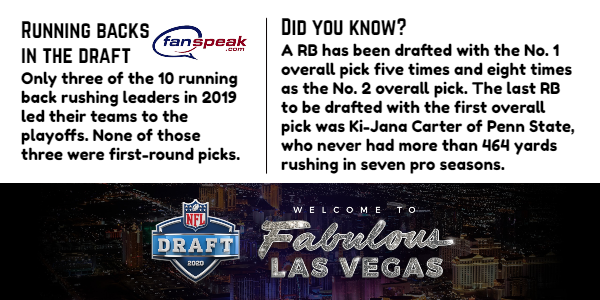 Last year’s rushing leaders paint a picture on the state of the running back position in the NFL.

However, only three of those RBs played on playoff teams: Derrick Henry of Tennessee (second-round pick), Chris Carson of Seattle (seventh-round) and Dalvin Cook of Minnesota (second-round).

But the Christian McCaffrey-led Carolina Panthers failed to qualify for the postseason. The same goes for Dallas (Ezekiel Elliott), Jacksonville (Leonard Fournette) and Oakland (Josh Jacobs). Those four were drafted in the first round. Joe Mixon (second-round pick by Cincinnati) and Marlon Mack (fourth-round pick by Indianapolis) round out the top 10 RB rushing totals – those two played for teams that also missed the playoffs.

However, the RBs drafted in the first- and second-rounds have enjoyed a reasonable amount of success in their rookie years. Jacobs, for example, received 45 percent of the team’s offensive snaps, according to Football Outsiders, while rushing for 1,150 yards and 7 touchdowns as a rookie last year.

Jacobs was one of three rookie RBs whose rushing totals ranked among the top 20 for running backs. The other two: David Montgomery of Chicago (third round) and Myles Sanders of Philadelphia (second round).

Is a 1st-round RB a luxury?

Running backs who are drafted in the first-round will likely enjoy a reasonable amount of success their rookie years, recent history suggests, but teams can find equally good value in the second round and beyond. And the teams who made the playoffs last year typically devoted their resources to other positions.

To underscore that point, look at the RB leaders for the four teams in the conference championships:

So, is running back a “safe pick?” Yes, especially if taken within the first two rounds.

But is taking a RB with one of your first two picks a smart move? Probably not.

And there are other issues that could push the top RBs down draft boards.

NFL draft analyst Marcus Mosher of USA Today says he believes the first RB to be drafted will go sometime in the late first round or second round.

“… (T)his isn’t a top-heavy draft when it comes to running backs,” Mosher said in an interview with Fanspeak. “There isn’t a Saquon Barkley or Ezekiel Elliott in this class, as all of the top running backs have one potentially fatal flaw. Another issue is that most teams are set at running back. Sure, there are a few teams that could upgrade that spot, such as the Dolphins and Falcons, but they both have so many other significant needs.”

That last point is a big reason why a player like Swift or Taylor might not hear their name called on Day 1. Simply put, it’s easier to find a starting-caliber RB in the later rounds than it is for other positions.

“While this running back class isn’t top-heavy, it is deep,” Mosher said. “Starting-caliber running backs can be found all over Day 2 and Day 3, while the same can’t be said about other positions such as cornerback, linebacker and edge rusher. Expect teams that need running backs to wait until later on in the draft to address that need.”