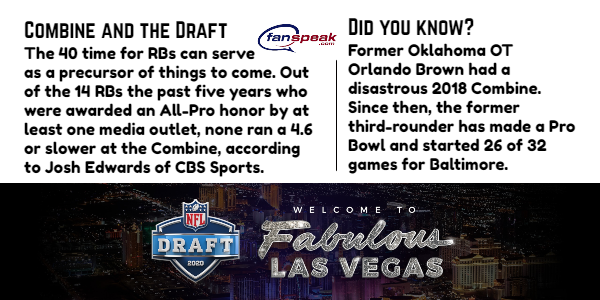 Jonathan Taylor is big and fast. J.K. Dobbins declined on-field workouts. Clyde Edwards-Helaire turned in a relatively slow 40. Tristin Wirfs may have moved to the top of the OT class. And Mekhi Becton is shockingly fast for his size.

Friday was a busy day at the 2020 NFL Scouting Combine.

Suffice to say, Taylor likely made money Friday night once the 40 times became official. The 5-foot-10, 226 pound junior from Wisconsin ran a best in his class 4.39 40-yard dash – an impressive feat considering he’s also one of the heaviest running backs at the Combine.

So while Akers probably helped his draft stock, Edwards-Helaire (5-7, 207) will now look to improve his Combine showing during LSU’s Pro Day on April 3 after running a 4.6 40, good for 17th out of 28 participants.

However, the LSU junior also posted the third-best vertical jump among RBs at 39.5 inches, and his 123-inch broad jump was tied for sixth-best.

One of the big winners – literally – was Boston College’s A.J. Dillon (6-feet, 247 pounds), who, as expected was the heaviest running back. So his 40 time of 4.53 was a big surprise and was the 10th-fastest among other RB participants. Dillon also posted a 41-inch vertical jump and 10-foot, 11-inch broad jump, tops among RBs.

“For a guy whose reputation is more of a ‘between the tackles’ type of runner, these numbers are so important. Dillon has an outstanding chance of getting scooped up at some point on day two with his college production combined with this type of athletic upside.”

The 6-5, 320 pound Iowa junior set a Combine record for his position with a 36.5 vertical, and his broad jump of 10-feet, 1 inch tied the Combine record. And as if that wasn’t enough, Wirfs also clocked a position-best 4.85 40, while his three-cone drill time of 7.65 seconds was fifth-best among offensive linemen. He also looked smooth during agility drills.

Becton, meanwhile, clocked a 5.10 40 time – a huge surprise given that he’s also the heaviest player at the Combine at 6-foot-7, 364 pounds. (Note: NFL Network draft analyst Daniel Jeremiah reported that Becton weighed 357 pounds Friday morning. As part of the new changes this year, players are being re-weighed the day of their combine workouts.)

Although Becton didn’t go through any more drills due to hamstring tightness, his 40-time was a “mic drop” moment for the massive Louisville junior. And his performance justifies his ascending draft stock.

“Overall, Becton has areas to improve — mainly balance and awareness — but he is a rare athlete at this size and his upside is through the roof,” wrote Jeremiah, who turned heads when he ranked Becton as his No. 5 overall prospect in his latest mock draft.

“(His) … smooth movement was tough to overlook,” writes NFL.com draft analyst Chad Reuter. “He looked the part of a guy capable of playing multiple positions in the NFL, providing the strongest punch in the group when asked to hit a bag, but still dropping his hips to change directions well.”

Trey Adams of Washington, though, had a rough day. The 6-8, 318 pound senior’s on-field agility was called “limited” by Reuter. Adams, who has endured two ACL tears (2017 and 2018), had the slowest 40 and worst vertical and broad jumps of any participant up to that point.

And Tony Pauline of Pro Football Network says many teams now have Wirfs and Georgia tackle Andrew Thomas as its top two OTs.

“Moving in the other direction is (Alabama’s) Jedrick Wills, as teams are concerned about his ability to mentally process a complex blocking scheme. Some teams now project Wills to guard,” Pauline said.

You can find Friday’s results from NFL.com here.