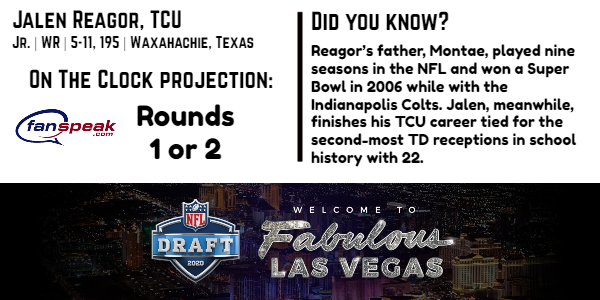 The first wave of underclassmen declarations are starting to trickle in, and the biggest name so far is TCU wide receiver Jalen Reagor, who many draft evaluators say is a future first- or second-round pick.

Reagor, a 5-foot-11, 195 pounds, had a somewhat disappointing year for the Horned Frogs, finishing his junior year with 43 receptions for a team-leading 611 yards receiving and five touchdowns. He also led the Big 12 and was third nationally with 312 punt return yards, including two touchdowns, while his punt return average of 20.8 yards was second in the nation.

“Honestly, not much has changed since the summer,” The Athletic NFL draft analyst Dane Brugler said, via the Fort Worth Star-Telegram. “I still think he’s a late first, early second, depending on what type of receiver teams are looking for in that range.

“Terrific athlete with professional make up. Inconsistent ball skills but a playmaker with the ball.”

“Team sources say that Reagor has no clue how to run a route and will need to be coached up on that, but he has game-breaking speed that is hard to find.”

Then, in late November, Walter Football heaped more praise on Reagor, saying he would have had a “massive season with a lot of long touchdowns” if TCU’s quarterback situation was better, adding that Reagor is a “speed demon and a home run hitter for the NFL.”

For his career, Reagor finishes with 2,248 yards receiving, 148 receptions and 22 touchdowns.