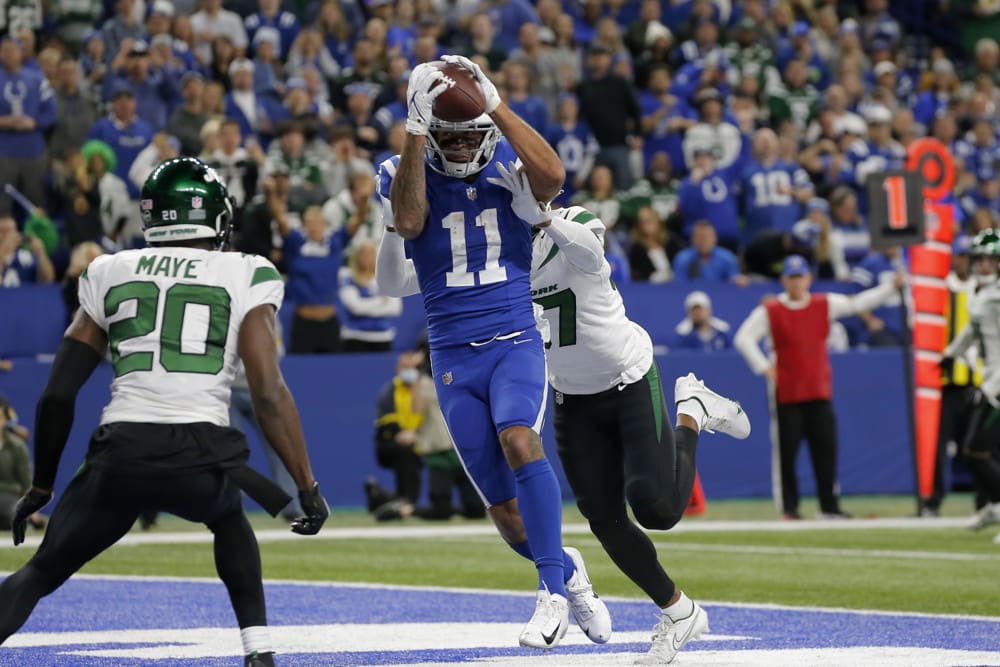 Ja’Marr Chase is my favorite receiver at any price in week 1. We have seen his slate breaking upside, and his connection with Joe Burrow is near perfect. Defenses will try to do more to take him away this season, but there is only so much you can do given the Bengals’ other weapons. The Steelers have a good defense, but their corners are their weakest point. Add in that Bengals have improved their offensive line and Burrow might have even more time to find his favorite target. I expect to spread out my ownership of expensive receivers, but Chase is someone to target for sure.

A.J. Brown on the other hand is someone I have very little interest in for this match-up. Brown presumably will be the Eagles’ top WR, but he will need to share targets with DeVonta Smith and Dallas Goedert. Brown also gets a downgrade in passing going from Ryan Tannehill to Jalen Hurts. Hurts had an impressive fantasy season last year, but mostly due to his rushing. He was highly inaccurate, which doesn’t bode well for Brown who excels at timing routes. The game script here also doesn’t feel that favorable, as the Eagles will probably be ahead and use their run game to grind the clock.

Pittman Jr. is probably the receiver that is just totally underpriced. He is coming off a strong season a year ago, and now sees an upgrade at QB, a weak Texans defense and almost no target competition. Yes perhaps the Colts just totally rely on Jonathan Taylor, but Indianapolis will probably want to get Matt Ryan going week 1. Pittman Jr. could have a field day versus a poor Texans secondary and put up 25-30 points at a very reasonable cost.

Overall I’m bullish on Michael Thomas coming back this season, but in week 1 I’m not that interested. I would imagine the Saints take things slow with Thomas, especially in a game they are likely to win pretty easily. So he might only see a 50-60% snap share to begin with. On top of that, while the overall match-up versus the Falcons is easy, the same can’t be said for whomever A.J. Terrell is on. Terrell has become a true shutdown corner, and when Thomas is out there I’d imagine he’s covering him quite often.

Collins showed some promise down the stretch as a rookie last season, and is the Texans’ unquestioned number 2 receiver to start the year. Though Houston’s offense isn’t one you typically want to target, they could be solid this season. Collins will be behind Brandin Cooks in the pecking order, but 6-10 targets most weeks feels like a solid range for him. The Texans figure to be down to the Colts which could help Collins be on the high-end of that range.

Play BestBall on Underdog for a chance to compete for $10 Million Dollars in Best Ball Mania 3! Use code: Fanspeak to get a 100% matching bonus up to $100!

Toney is entering the season with plenty of preseason hype, but this is a match-up I’m not really interested in. The Titans’ defense did show some signs of struggles vs receivers a year ago, but they are filled with young upside corners. I also just see Daniel Jones struggling in this match-up versus a strong Titans pass rush. Toney might be an electric player but is a bit of a dart throw at this point. He’s just as likely to get 5 points as 25 points. With some wide receivers underpriced you are taking a big opportunity cost here.

Let’s see the best TE in the league, the unquestioned top target of Mahomes, in the highest-scoring game on the slate? Sign me up! The fact that Kelce isn’t even the most expensive is even an added bonus, as he can easily see 12-15 targets in this game. I do expect Kelce to be the highest-owned TE on the slate, but I’m not sure it matters given the supreme upside. He has 100 bonus potential, multi-TD potential and the ability to outscore numerous RB and WR who cost considerably more than him.

For a fade, the easy call here for me is Mark Andrews the TE who is more expensive than Kelce. Yes, Andrews outproduced Kelce a year ago, but that was in a year where the Ravens were forced to throw far more. Also, Andrews’ best games game with the Ravens’ back-up QBs as they didn’t have the same arm talent as Lamar Jackson to get it to the receivers. Andrews will still have some big weeks on the year, but he should be viewed through a different lens from what we saw a year ago. This match-up is not favorable either as the Ravens should pretty easily handle the Jets. I wouldn’t expect this to be a high-passing volume game for Jackson. That makes it tougher to project the targets/yards that Andrews would need to pay off this price tag. I would make a strong case that Andrews is at least $1,500 overpriced.

Ertz to me is grossly underpriced and a great cheap way to get a piece of the highest-scoring game on the slate. Last year we saw Ertz have multiple big games after being traded to the Cardinals, and without DeAndre Hopkins he should be the 1st or 2nd target on the team in this game. His ownership will likely come in less than it should given some of the reasonable TE prices on the slate. While it’s not ideal for maybe some of the largest field tournaments, double stacking Kelce and Ertz could be viable in this slate.

Though I do like the fact that Pittsburgh will likely need to throw a lot in this game, Freiermuth is a TE that I will wait till week 2 to play. The Bengals have very talented safeties and highly athletic linebackers, that can match-up with him. There just isn’t a need to use Freiermuth considering the softer TE pricing.

Engram has never lived up to his 1st round draft hype, but he gets new life in Jacksonville as their top TE. Engram could quickly establish himself as one of the top targets on this team, and he has a very favorable match-up in week 1. Washington has struggled for years to defend the TE position and they are the thinnest on defense at LB and Safety. This is absolutely a spot where Engram could get 15+ points, which is fantastic for his price tag.

The guy likely to replace Engram in Rickey Seals-Jones is the TE that I don’t want to touch at all. Too much hype is surrounding Daniel Jones this offseason, despite his poor track record. On top of that, the Giants are facing a good Titans defense that limited tight ends a year ago.

The 49ers are facing a terrible Bears offense that has very little overall talent. Chicago’s offensive line might be the worst in the league and Justin Fields struggled with feeling pressure last year. Typically paying up for defense isn’t a great move, but here this could be an exception. It’s not crazy to think San Francisco could get 20+ points in this match-up.

People like the Browns defense led by Myles Garrett, but I don’t love this match-up in week 1. Yes presumably Garrett knows some of Baker Mayfield‘s tendencies, but he also knows theirs. Carolina could easily get ahead in this game and have McCaffrey as the focal point of the offense. I also don’t think all the drama surrounding the Browns right now helps this team as a whole. As one of the more expensive defenses, this is an easy fade situation for me.

Carolina is my favorite defense to target in this range as they have a lot going for them. The Panthers have a good young defense that has talent both upfront and in the secondary. They are at home in this match-up and playing against Jacoby Brissett. Brissett has less experience in this Cleveland Offense than Baker Mayfield, who can give all sorts of insight into how Cleveland works. Currently the spread is close, I think there is a real chance that the Panthers control this game. That will force Cleveland to get out of their run-heavy ways, which could lead to more sacks and turnovers.

This simply has to be a misprice as there is no way the Falcons deserve to be $2,800. They had one of the worst defenses in football last season, managing a meager 18 sacks. This is a defense that I wouldn’t want to play at 2,000 most weeks, especially versus a strong Saints offensive line with decent weapons. $2,800 is totally unreasonable in this situation, and not even in consideration.

There are a couple intriguing low-cost defenses to use for tournaments, but the top option might be the Washington Commanders. Washington will still be without edge rusher Chase Young, but they still have a defensive front led by Jonathan Allen and Montez Sweat. They can generate pressure at a good rate and could cause a lot of problems for Trevor Lawrence and the Jaguars’ offense. Though Lawrence is a good bet to have a significant sophomore bounce, and Jacksonville made some improvements along the offensive line, Washington’s defense is capable of racking up sacks in this type of game.

For a fade, I think the Raiders are the one cheap team that I want zero to do with. Vegas has some really good pass rushers, but this game could get out of hand quickly. The Chargers’ offense is one of the best in the league, and you are taking a real chance of getting negative points with the Raiders’ defense.

By Megan Shoup and Steve Shoup:   Every week of the season for daily fantasy brings new debates…