If you have followed my series, The Ravens 20 Greatest Victories in Team History, then you know we have reached the best of the best in the short but very successful history of the Baltimore Ravens. We have reached crunch time in that we are down the “Elite 8”. Half of those Elite 8 will be revealed later today but before I continue, I could not help but think of how much sweeter some of the wins felt after some of the heartbreaking losses the Ravens have suffered through their 16 seasons.

In the words of the late great Jim McKay, the former sports broadcaster and mister do everything for ABC Sports, who also happens to be a native Baltimorean, you simply cannot enjoy the “thrill of victory” without having experienced the “agony of defeat”. Flacco hangs his head in defeat

While the Ravens are owners of two Super Bowl victories since the 2000 season, Ravens fans have had plenty of tough losses along the way.  Before I deliver the greatest eight games in franchise history, allow me to create a tad bit of pain first. You know what they say, nothing in life is easy.

These losses have helped Ravens fans appreciate watching the likes of Ray Lewis, Art Modell and most recently, John Harbaugh and Joe Flacco hoist the beautiful silver trophy they simply call “The Lombardi”

However, following some of these notorious let downs, hoisting the Lombardi was the furthest thing from Ravens fans minds.

Under first year head coach Brian Billick, the Ravens were 2-4 heading into their Halloween affair with the Buffalo Bills. Just six games into the Billick era, whispers had already begun that a familiar script was starting to shape in Baltimore—one that would plague Billick’s entire nine-year career.

The defense plays well enough to win; the Ravens get some production out of their running game, but little—very little from their quarterback and the passing attack. The mold of the 2000 defense was starting to take shape in 1999. On this day, the Ravens held the resurgent Doug Flutie and Bills to 249 yards of total offense, intercepted three Flutie passes and knocked down 12 more. 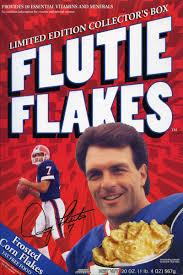 Ravens prevent themselves from winning vs. Flutie

However, the most questionable call of the game was their defensive alignment on a fourth-and-15 from the Ravens’ 39-yard line with 2: 36 left in the game. Defensive coordinator Marvin Lewis went into the prevent defense and the prevent defense did its job—it prevented the Ravens from winning the game.The Ravens had gotten pressure on Flute all afternoon with at least a four-man rush, but this time the Ravens chose to rush three. Flutie waited, waited and then waited for his receivers to clear before running for 17 yards. Four plays later, Flutie, rolling to his right, passed 5 yards to running back Jonathan Linton in the end zone for the game-winning touchdown with 1: 35 to play in the contest. With no formidable offensive attack, the Ravens day was finished.

Billick was down about his team’s inability to hold a 10-3 lead in the fourth quarter. Following the 13-10 loss Billick said, “Obviously, this is a very tough, emotional loss for us,” Billick said. “It was hard-fought; it’s very frustrating, it’s very difficult. I guess it’s my inexperience as a head coach not knowing what to say to them to ease their pain. All I can say is that we have to learn from our mistakes and go back to work.”

Despite winning a Super Bowl the following season, the Ravens poor offensive play with even worse play at the quarterback position would show it’s ugly head on many game days, including this afternoon. The Bills scored their 10 fourth-quarter points off two turnovers by the Ravens’ QB Tony Banks, who was making his first start at quarterback. Buffalo was only 5-for-18 on third downs and averaged just 3.5 yards per play. The Ravens sacked Flutie three times and harassed him throughout the game. The Ravens controlled the tempo of the game until a fourth-quarter meltdown.

Banks was forced to play because of the ineffectiveness of Scott Mitchell and Stoney Case. Seeing those three names makes even harder to believe that the current Super Bowl winning QB and game MVP resides in the Charm City doesn’t it Ravens fans.

The Ravens entered this home game in December with a 7-4 record and their playoff destiny firmly in their own hands. They would leave it in total disarray and flounder down the stretch, failing to make the postseason.  The Ravens suffered a 27-26 loss to the Cincinnati Bengals that was as devastating as it was disturbing, with a monumental fourth-quarter collapse that stunned an M&T Bank Stadium crowd of 69,695 and put the team’s season on notice. The NFL’s stingiest defense allowed Carson Palmer to pass for 382-yards and three touchdowns, as Chad Johnson and TJ Houshmandzadeh combined for 232 of them and all three Palmer TD tosses. The Ravens allowed 24 points in the fourth quarter – the most ever in franchise history – failing to protect a 20-3 lead. Baltimore’s secondary gave up 200 yards passing in the final period as the Bengals converted for scores on their last four drives, marching 19, 76, 68 and 60 yards.

The loss to the Bengals seemed to send the Ravens into the tailspin to complete the season, as they missed making the post season. Baltimore finished the season 2-2 with a 9-7 record, six games behind the 15-1 Steelers. The NY Jets and Denver Broncos stole the Wild Cards– both with 10-6 records.

Ravens beat writer Mike Preston said it best when starting the article describing the Ravens 20-13 loss in the first regular season NFL game ever played at Baltimore’s new stadium. Preston wrote, “It took the city of Baltimore and the state of Maryland nearly 14 years to get a new stadium constructed, and the Ravens only three hours and one minute to lose their first game in the facility. The new $223 million stadium was a house of horror for the Ravens, who self-destructed and had their coming-out party ruined in a 20-13 loss to the Pittsburgh Steelers before 68,847 at Ravens stadium at Camden Yards”. 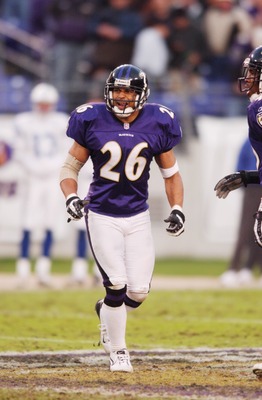 The first games of Ted Marchibroda’s last season as Ravens head coach would play out like a lot of his previous 32 during the team’s first two seasons in their new town, in disappointing fashion.

The Ravens did not make big plays: Cornerback Rod Woodson dropped an interception that would have been a touchdown midway through the first quarter. Running back Priest Holmes tripped over his own feet coming off a block from wide receiver Michael Jackson in the first quarter, so what should have been a 27-yard touchdown run turned into a 4-yard gain — 1 short of a first down — leading to a 41-yard field goal by Stover. Jermain Lewis dropped two passes, one a potential 54-yard touchdown pass in the third quarter. Stover missed three field-goal attempts.

Ugly-Ugly-Ugly would be the only way to describe this one. “We helped them out today,” said defensive end Michael McCrary. “I don’t care what anybody thinks, we gave it to them. We didn’t come in with an attitude that we were unbeatable [after a perfect preseason], but today we found out that we can lose. It’s a shame, but good teams rebound from losses like this. We’ve got to.”

At 6-8, the Ravens would not be a good team in 1998. Nevertheless, a good mixture of youth and veteran leadership laid the foundation for what would happen just two seasons later.

If there was ever a game that showed the 2001 Ravens were not going to repeat as champions this was it. Elvis Grbac, who replaced SB XXXV winner Trent Dilfer, threw four interceptions in a performance that typified his one-year stay in Baltimore. The Browns won the earlier meeting between the two teams 24-14. The only reason that game isn’t also on this list is it took place in Cleveland—-But this contest is as deserving as any to make the dreadful countdown. 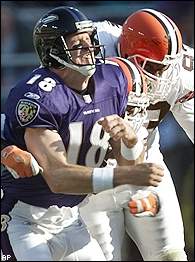 A painful day for Elvis

The Browns picked up where they left off in Cleveland by storming to a 20-7 at halftime before finishing off the Ravens 27-17.

Ravens fans will remember Grbac played one season in Baltimore before retiring from the league. Considered an outcast from his team and with dissension sitting on Grbac’s head having replaced the popular Dilfer at QB, tossing four int’s in this home contest did nothing to endear him to his teammates or the passionate fans in Baltimore.

Grbac was no “Hon” to the Charm city faithful and his breakdowns caused rumblings in the locker room and a ripple in the division standings, dropping the Ravens 1 1/2 games behind the AFC Central-leading Pittsburgh Steelers. The Ravens remained in second place, but only a half-game ahead of the Browns, which swept the season series from the Ravens and now held the edge in any tiebreakers.

Despite poor and inconsistent play from Grbac more often than not during the 01’ season, the Ravens would still manage to return to the playoffs but were decisively beaten by the Steelers in the second round.

The story of the 2007 regular season was the undefeated New England Patriots. What many NFL fans may or may not remember is the closest the Pats came to losing their perfect season occurred on Monday Night Football in Week 13, as an underachieving Ravens team with Kyle Boller at QB, almost derailed New England’s 11-0 start.

The Flag toss by Bart Scott

However, the Ravens, as they seemingly did many times during the 07 season, beat themselves and managed to lose the contest. Baltimore was on the brink of a historic upset but killed their chances with mistakes, penalties and bad coaching decisions to finish the game.

With 1:48 left in the game, an ill-advised timeout called by Ravens defensive coordinator Rex Ryan nullified the fourth down stop of Tom Brady’s lame QB sneak. The whistle gave New England another chance to continue the drive and we all know what happens when Tommy Terrific get two shots at glory. (Unless he is playing the Giants) Brady capitalized, eventually throwing an 8-yard touchdown to Jabar Gaffney with 44 seconds remaining to secure win number 12 with a 27-24 victory on a cold night in Baltimore.

Other mistakes cost the Ravens as well. They failed to run on third-and-two late in the fourth quarter and linebacker Bart Scott was called for two unsportsmanlike penalties in the final minute.

Despite allowing the late TD, the never say die Ravens almost won the contest on the game’s final play. Kyle Boller threw up a Hail Mary, which found Ravens WR Mark Clayton at the Patriots’ 3-yard line but he was tackled after catching the prayer, ending the game.

A distraught Billick following the loss

The Patriots took another step in their march to a perfect season, improving to 12-0 and the Ravens, who entered the game as 19-point underdogs, lost for a franchise-worst sixth straight game despite putting together their best performance of the season. This would prove to be Ravens head coach Brian Billick’s last season, as the Ravens would win just once more the rest of the season finishing the year at a disappointing 5-11.

Check back in a few short hours as I deliver five through one and then get your emotions back on track with No.8 through No.4 in the Greatest Games Series.

Have a great Memorial Day.