Do The Ravens Really Have A Chance?

After beating the Indianapolis Colts last week, the Ravens will travel to Denver to face the 1st seeded Broncos.  These two teams faced back in week 15 and the Broncos won a blowout in Baltimore.

1.  Do The Ravens Have a Chance?
Ever since the Ravens beat the Colts, everyone has been saying they will lose to the Broncos.  ESPN got into the action early, posting this main headline.  If you don’t want to click the link, the headline reads “Thanks for the Memories” … and has a subhead saying, “…because Sunday was your final NFL win, Ray Lewis. Your career will end in Denver.”  Denver Post columnist Mark Kiszla got into the act next saying “If this Rust Belt town needed a bib to catch all the sentimental tears shed at the last home game of iconic linebacker Ray Lewis, how is Baltimore going to handle the emotional breakdown when the Broncos force him into retirement as a loser?” and “Like Lewis, their very passionate but washed-up warrior, the Ravens now seem better at striking a pose than striking fear in the hearts of a foe.”  These are just two of many examples of what most of the media is saying.

Ravens CB Cary Williams offered his opinion on this by saying “You see it everywhere.  Every time you turn on the [darn] TV you see somebody talking about the Broncos and the Patriots in the AFC championship game.  It’s great [sarcastic].”  He added “That’s fine [being an underdog]. We appreciate it. We love that.  People are counting us out.  We like that. We love being the underdog.  You get to go out there and prove people wrong”

The only person I could find who would pick the Ravens is FOX Sports’s Peter Schrager.  He said “Yes, I like the Ravens to upset the Broncos in Denver on Saturday afternoon. And it’s not even because I am blown away by Baltimore. Truthfully, I’m just not sold on Denver.”  He also said The Ravens are no doubt battle tested. Denver? They’ve been in cruise control since October,” he wrote. “If Saturday’s game is close in the second half, are we certain the Broncos will respond under pressure? I know Baltimore’s been through those wars this year.”

Now, for my opinion on this matter.  All of the teams left in the playoffs deserve to be here and, despite what everyone is saying, both the Ravens and the Texans have chances to upset the Broncos and Patriots, respectively.  Oddsmakers don’t believe in the Ravens making them a 9.5 point underdog.  I get why everyone is saying the Broncos will cruise to victory but, in all honesty, they aren’t looking deep enough.  When these two teams played, yes, the Broncos demolished the Ravens.  However, the Ravens had almost half of their starters on the injury report and many didn’t play.  The Ravens are now healthy enough to put up a fight.  Next is the Ray Lewis factor.  I know this doesn’t sound like much but, if you give any football team enough bulletin board material they will play way better than expected, especially if Ray Lewis is their leader.  The last reason is the offensive line but we will look closer at this a little later.  I am not saying that the Ravens will win this game but, they will play the Broncos a lot closer than most people think and, in a close game, anything can happen.

2.  Peyton Manning vs Ray Lewis
This isn’t a performance matchup, this is an audible matchup.  Manning will change the play at the line all the time based on what he sees in the defense.  Back in week 15, the Ravens had Josh Bynes starting at ILB who started the season injured and then on the practice squad.  Now, the Ravens have Ray Lewis back who can go audible-to-audible with Manning.  Lewis is definitely the player he used to be but, his mind is still just as good, if not better from all his experience.  Manning has won an astounding nine straight times so it will be interesting to see how Manning does against the Ravens when they have Ray Lewis.  This will also be the last time these two will face each other due to the retirement of Lewis. 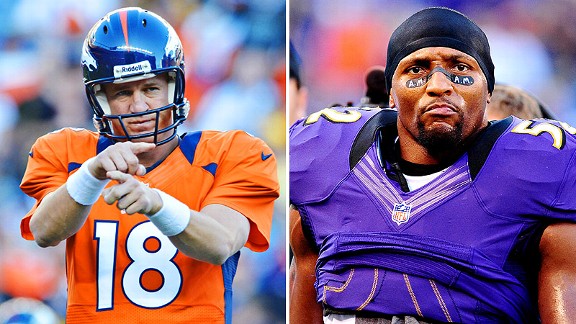 Peyton Manning and Ray Lewis will face each other for the last time.

3.  Offensive Line
Last week the Ravens offensive line finally looked good as a unit.  They only allowed one sack and that was on a naked bootleg.  Its not just sacks either, the line didn’t allow much pressure.  Last time the Ravens played the Broncos, the Broncos defensive line had a field day getting pressure on almost every play.  Quarterback Joe Flacco never had a chance to throw the ball as he was running for his life.  In the running game, the line had no push all day long against the Broncos.  Against the Colts last week, the line opened up some big holes allowing the backs to run for 170 yards.  If the Ravens offensive line can play like it did last week then they should give Flacco enough time to find the open receiver downfield.  Even if they play like last week, it might not be enough as the Broncos defensive line is better than the Colts’ line.  The most important player to contain is LB Von Miller who has 18.5 sacks this year.

4.  Pass Rush
The best way to disrupt Manning is to get pressure on him.  I think everyone knows he isn’t a mobile quarterback at all.  If you can get pressure on him, it will force him to make faster decisions and will eventually lead to him making a mistake and throwing the ball to the wrong spot. Manning has been blessed with a great offensive line this year which has only given up 21 sacks, good for 2nd best in the NFL.  The bad news for Manning is the only team that has allowed less sacks is the New York Giants and, the Ravens were able to get 3 sacks on Manning’s younger brother, Eli.  Also going for the Ravens, is Paul Kruger.  Kruger now has 10 sacks in his last 9 games.  He is also coming off a 2.5 sack game against the Colts.  Also in this game, Kruger had an amazing 5 QB hits.  If the Ravens can’t get pressure on Peyton Manning, they will have a very tough time winning.

Ravens OLB Paul Kruger will need to have another great game to try and neutralize Broncos QB Peyton Manning.