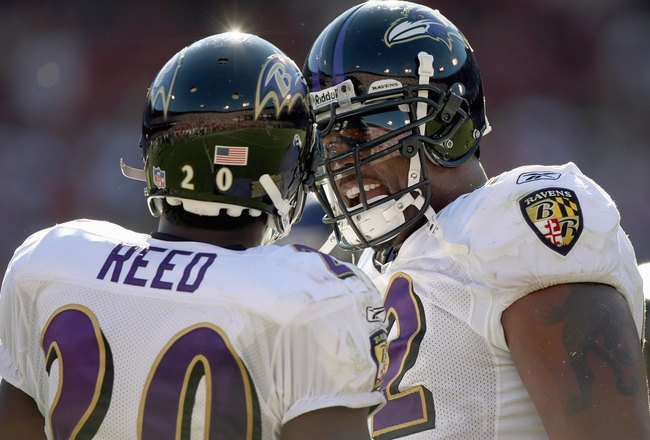 It is likely No.20 has also played his final game as a Raven at M&T

Ray Lewis is probably not the only future Hall of Fame Ravens player to have played his last game at M&T Bank Stadium wearing the purple and black for Baltimore. Following Sundays Wild Card win over the Indianapolis Colts, you can almost assuredly place safety Ed Reed in that category as well.  In addition, you can add wide receiver Anquan Boldin. While Boldin may not be a Hall of Fame inductee in Canton, Ohio when he finishes playing in the NFL, he is certainly going to be in the Ravens Ring of Honor someday.

How important have Boldin,  Reed and of course linebacker Ray Lewis been to this Ravens team in their last three playoff games dating back to last season and including Sunday’s 24-9 win over the upstart Indianapolis Colts? It is entirely possible that without just one of them, much less any of them, the Ravens could have been one and done last year and in a much tougher battle against a young Colts team that was 9-1 this season in one-possession games and had seven come from behind victories this season.

A 15-point victory would have been a pipe dream without Boldin on Sunday. Another wide receiver would have stepped up you say, Torrey Smith perhaps. I wouldn’t count on it and I do not mean that in a derogatory way.

Smith could be emotionally and physically drained from a long season of running go routes and when you factor the personally devastating tragic circumstance of late September, when prior to a  Week 4 contest vs. the Patriots his younger brother was killed in a motorcycle accident, it is understandable to see how Smith has hit a wall of sorts.

The former Maryland standout has just 12 catches in his last six games and just one receiving touchdown (Week 15) since he had two vs. Oakland way back on November 11. Jacoby Jones is not as reliable holding onto the ball as Ravens fans would like to think he is and Tandon Doss, the Ravens fourth round pick in 2011 from Indiana, had three very critical passes go off his fingers on Sunday.

That leaves the grizzled veteran Boldin and all he did was set a Ravens’ playoff-record with 145 receiving yards on five catches (29.0 avg.). To further illustrate Boldin’s impact and timing of being a clutch receiver, his 145 yards are the most in a second half of an NFL playoff game since Jerry Rice posted 157 in Super Bowl XXIII back in 1989. Boldin’s third quarter catches were momentum swingers for the Ravens, one on each of Baltimore’s first two drives following the half.

Boldin has been clutch in post season for Ravens

Over the last 20 years, only two other receivers caught two passes of 45 yards or more in the same period of a playoff game: Steve Smith against the Bears in 2006 and Demaryius Thomas of the Broncos against the Steelers last January.

In fact, there have only been three 100-yard receiving days in Ravens postseason history – two of which have come via Boldin, who had 101 against the Patriots in the AFC Championship game last January.

Boldin bailed out his struggling quarterback in last year’s AFC Divisional playoff game versus another upstart team that came a bit closer to beating the Ravens at home in the playoffs. The former Arizona Cardinal, who signed with the Ravens following the 2009 season, led his team in receiving  yards with 73, as he caught four balls against the Houston Texans last January but none more important than the decisive touchdown, which proved to be the game winner putting the Ravens up 17-3 in a game they eventually won 20-13.

In that same game, future Hall of Fame safety Ed Reed would actually seal the Texans fate on their final two drives of the game. Reed picked off a TJ Yates pass intended for Andrea Johnson in the end zone with two minutes to play and then knocked down a Hail Mary that almost made it into the hands of Houston’s Kevin Walter.

You know what Reed has done during the regular season. Just in case you have forgotten, here is a reminder. As an eight-time Pro Bowler, Reed has tallied 61 picks during his career – the most in Ravens history and the NFL since he entered the league in 2002. Among active players, Reed’s career INTs also rank first, while his 1,541 return yards are an NFL record, which he set in Week 1’s win over Cincy.

Speaking of the playoffs, Reed’s eight-career playoff INTs rank as the most among active NFL players and tie (Lester Hayes) for second most all time (record is nine by three different players). Reed’s 162 return yards stand fourth all time, while he also has 40 tackles (34 solo) and 19 PD in postseason play.

Let’s also not forget it was Ed Reed who broke up a third down pass intended for Aaron Hernandez from Tom Brady with 1:56 left to play in the AFC Championship game, which set up Joe Flacco’s drive that should have ended with a trip to the Super Bowl if not for a certain dropped pass and missed field goal.

You know about the deserved excitement surrounding Ray Lewis’s final game at M&T Bank Stadium. The 17-year 13-time Pro Bowler deserved every accolade he received. Sorry Reggie Wayne if the victory formation dance offended you. The only way to have stopped it was to win the game and Lewis was not going to let that happen.

His 13 tackles led the Ravens on Sunday and following the Cal Ripken Jr. lap around the stadium to shake the fans hands after the game, No.52 will take his place on the Baltimore Sports Mt. Rushmore with Cal, Johnny U and Brooksie. 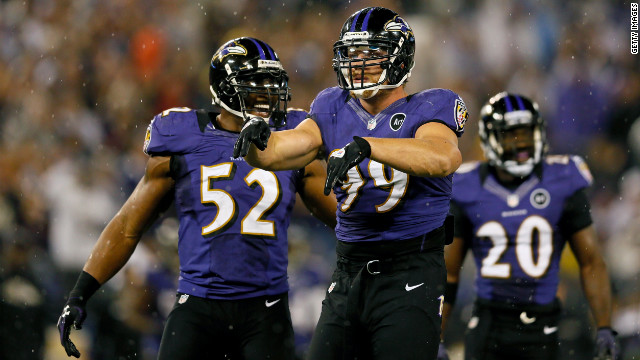 Paul Kruger is an UFA along with Danell Ellerbe

Truth is, if Lewis decided he wanted another year, the Ravens would have had a very serious decision to make about bringing Ray back at his projected price. The Ravens were not trending towards greatness with Lewis in the middle for the first five and half games. His announcement was perfect timing and definitely stole back the emotional edge Colts Head Coach Chuck Pagano provided his team by making it back to the sideline after battling Leukemia.

The biggest off-season contract priority is going to be that of QB Joe Flacco. Of course with Lewis leaving, linebackers Dannell Ellerbe (UFA) and Paul Kruger (UFA) now take a bit more of the big stage, especially with the money both have earned for themselves for next season without Sugar Ray in the lineup this season. However, much like Ravens GM Ozzie Newsome did with Ray Rice last year; the Ravens may opt to use the franchise tag on Flacco and then try to work a deal before the tag deadline in early July.

If the Ravens intend to, or are forced to use the Franchise Tag on Flacco, they are going to need to create additional Salary Cap space and it’s likely that veterans such as Anquan Boldin, who are under contract next season, are sacrificed for the very quarterback he may have helped earn that big deal for in the first place.

The 2013 Franchise Tag for Quarterbacks has been estimated to be in the $14-16M range and that money is not just coming from the contract of a retired Ray Lewis.

At the end of the season Ed Reed’s six-year, $44 million contract expires, and the Ravens are unlikely to offer him another one. Can anyone say Saints or Jets if Reed decides to play another few seasons? Besides, the Ravens are initially thought to be very tight against the Cap heading into the 2013 off-season and would not have what Reed would require and keep Flacco, Ellerbe as well as Kruger.

That brings us to players like Boldin. According to the Baltimore Ravens and several other NFL on-line publications, Boldin’s contract is up after the 2013 season and his cap number of $7.53M is the fourth highest number on the team. That makes Boldin a very likely cut before June 1, saving the Ravens $6M, with only $1.53M in dead salary cap money.

It is almost a no brainer but understandably tough to swallow considering his record-breaking performance on Sunday. Players such as Haloti Ngata, who is scheduled to make $10.4M in 2013 and Terrell Suggs, as well as Pro Bowl Guard Marshall Yanda, could all be in line for a bit of contract restructuring to help out the team this off-season.

Enjoy the play of these great players while you still can Ravens fans. Beating the Broncos and snapping Peyton Manning’s nine game winning streak against the Ravens takes on a completely new meaning this Saturday considering all of this.

I can assure you of this Ravens fans, if Baltimore does beat Denver, it will be because you’ve heard Lewis, Reed and Boldin’s name called quite a bit on Saturday afternoon. In addition, it is entirely possible if the Ravens are in the playoffs for a sixth straight year following the 2013 season, they will actually have to beat one or two of these names to advance.

*Stay tuned for articles from me all week previewing the Ravens and Broncos Divisional contest. I will publish a fact and opinion article on Wednesday and be sure not to miss the Thursday Night NFL Show on Fanspeak Radio Network as well as the Friday Night Football Frenzy. Stephen Shoup and I will host both shows.

The Baltimore Ravens Pre-Game Show, hosted by yours truly and Stephen Shoup will be Saturday at 2:00 p.m., again on the Fanspeak Radio Network.