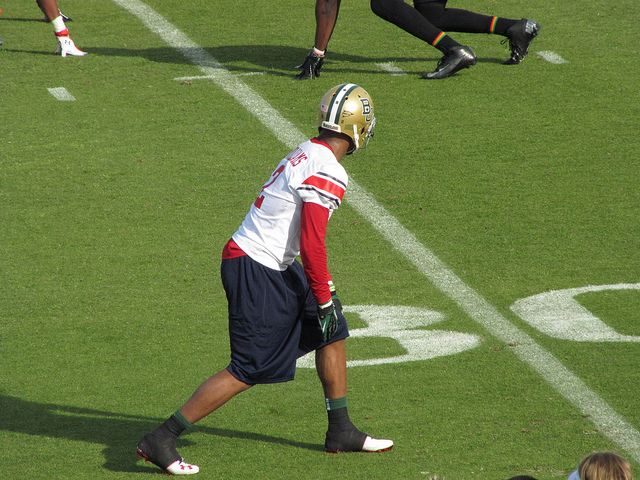 -Jones didn’t help himself again with a poor overall performance in practice. He struggled with his footwork coming from under center and didn’t look too comfortable throwing intermediate or longer routes. He has a nice deep ball, but it was rarely on target. He was much more precise on shorter quick passes, but got uncomfortable quick when his first or second read weren’t there. Too many times when you saw a poor throw he was the culprit.

-Manuel had a really strong day overall, he showed good mobility in the pocket to buy time and still deliver a strike on the move. His footwork wasn’t perfect, but it wasn’t bad and allowed him to throw a number of strong accurate throws down the field. A couple times in 7-on-7’s and team drills he made some poor decisions or was inaccurate with his throw, but he had a very good practice overall. I thought he rebounded nicely from a poor Tuesday practice and his potential is very apparent. You will need to have some patience with him, but you could find a good quarterback if you handle him correctly..

Wilson probably had the best day of any of the signal callers. He did throw a bad interception late during team drills, but that was really his only blemish of the day. He showed good poise and awareness in the pocket and displayed a strong accurate arm on a number of throws down field. Overall he did a really good job of placing the ball in the strike zone of his receiver and away from defenders. Wilson definitely opened some eyes with this practice and if he keeps it up this week could move up some draft boards.

Taylor had some concerns about speed coming into the draft process, but showed good burst today, both in rushing and receiving. He might not be the fastest running back, but it didn’t appear to be a liability for him either. He showed good vision finding his hole and finding it quickly. I really liked his decisiveness, which is an underrated trait for the next level. Taylor was also really impressive catching the ball as well, he was good in space and ran crisp routes getting separation from the defender.

McDonald is an underrated tight end, but had a really strong day that could start pushing him up draft boards. He did everything well today. He ran good solid routes getting separation from both safeties and linebackers. He caught everything that he got his hands on and displayed nice speed. He also did well as a blocker in team drills, showing nice two-way ability.

Williams isn’t the fastest tight end you will every see, but that doesn’t mean you can ignore him in the passing game. Linebackers struggled all day to cover him as he used his big frame to shield them from the ball, and displayed nice strong hands. Williams really excelled in the blocking game though as he was essentially a 6th offensive linemen out there. He swallowed up both defensive ends and linebackers with ease.

Early on Vernon had a strong practice showing nice quickness and getting in and out of his breaks. Latter in 1-on-1’s and 7-on-7’s he struggled on a couple reps, not getting off a jam and double catching a ball, but overall it was another really solid day for Vernon, who has made the most of this opportunity.

Patton had a really strong day, he was very fluid and showed nice short area quickness. He also showed nice awareness and strong hands. Patton made a number of highlight reel catches and is challenging Williams for the best receiver on this squad. Had by far the best practice of any receiver. Only guy who was consistently able to get behind the coverage and gain separation throughout the practice. He made a number of highly acrobatic catches and tracked the ball well on long passes. Williams looks to be the whole package and will definitely be someone to watch going forward.

Warford had the best all-around day by any offensive lineman, he was quick off the ball and showed a good anchor, rarely letting anyone push him back or control the point of attack. He also showed surprising quickness for his size and handled speed well. He just battles thoughout and is great watching him due to his technique and anchor.

Really thought he had a great all-around practice, he lined up at both tackle spots and really showed quick feet and a nice sound base. He anchored well and didn’t allow much penetration. He wasn’t as good versus the run, but it was by no means a bad showing.

Up-and-down practice, looked very quick in individual drills and and 1-on-1’s, but struggled some in team drills he didn’t win as many battles as you’d hope. Showed some natural bust and edge ability, but needs to get more wins with that talent level. He did show better awareness than you’d expect for a guy who has such little football experience.

Jenkins was a monster in middle, nearly impossible to block 1-on-1, and  disrupting a number of plays with his penetration. He plays with excellent leverage, and despite his size he’s very quick off the ball getting into defender’s pads. Watching him face off with Larry Warford is one of the best match-ups you will see.

Goodman was very impressive today, got off the line quick and was perhaps the 2nd toughest defensive lineman to block after Jenkins. He showed a good ability to rush the quarterback and nice recognition against the run.

Lester looked good early on in practice in both individual and 1-on-1 drills, but disappeared or struggled later. He didn’t match-up well with tight ends, and really didn’t excel in any one area. He was pretty inconsistent in the team drills, with one rep showing nice recognition and back peddle and then the next rep missing his assignment. Overall below average day.

Rambo looked flawless in the individual position drills setting the bench mark everyone else was compared to, but he all but disappeared once he started going up against receivers/tight ends. He still made a play or two, but overall he was late recognizing a number of passes, and took bad angles to the ball. Given how he started and his overall hype it was a poor overall showing. It’s getting to be groundhogs day with Rambo as each day he starts off well and then all but disappears.

Wilcox has gotten better each day, he’s not fully there yet, but he’s doing better in 1-on-1’s and team drills. He really struggled in the positional drills, especially with his ability to flip his hips and his back peddle. While there is some legitimate promise there, he’s very much a developmental prospect.

McFadden had one of the better performances today among defensive backs. He was very fluid in the drills, displaying good speed and quickness. He really excelled when faced with receivers. He showed physicality and great reaction time, and was constantly the toughest draw for a particular receiver.