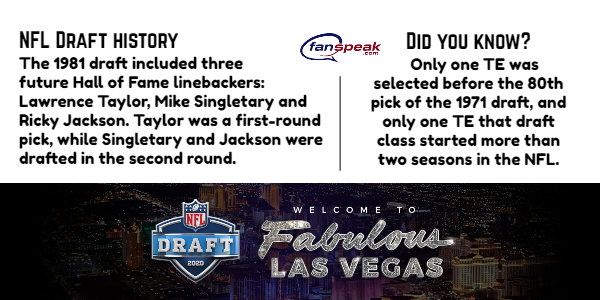 For NFL draft enthusiasts, there’s nothing better than a proverbial “peak behind the curtain” interview with a coach or scout.

And that’s exactly what The Bleacher Report’s Matt Miller provided, as the longtime NFL draft analyst managed to get a current NFC coach to evaluate Miller’s own first round mock draft.

Here’s a sampling of Miller’s interview:

“This is the second- or third-best wide receiver class of the past 20 or 30 years. That means a lot of teams might trade back because there are so many good ones. I wouldn’t be stunned if there were only a few wide receivers taken in the first round. You don’t need to draft them high.”

On Cleveland taking an offensive lineman in the first round:

“That offensive line is a dumpster fire.”

There is no NFL comparison. pic.twitter.com/4jNEBSorkJ

“What I feel pretty confident about is I’d be stunned if [quarterback] Derek Carr was the starter next season.”

On Utah State quarterback Jordan Love, mocked by most analysts as a first-rounder:

“Love is a third-round pick.”

On LSU cornerback Kristian Fulton, who Miller has going to Jacksonville with pick No. 20:

“He’s a top-10 pick to me. If he falls this low, a team will get a nice bargain. He’ll be one of better rookies next year.”

On Iowa defensive lineman A.J. Epenesa, who is widely regarded as the second- or third-best edge defender in the draft:

“He’s just OK. He benefitted more from a lot of the players around him.”

On Tennessee free agent RB Derrick Henry (Miller has the Titans drafting Wisconsin’s Jonathan Taylor in the first round):

“I think the Titans are going to let Derrick Henry go because they think he’s too expensive.”