Unlike last week, there is more then one move that is worthy of being discussed here.

Another great NFL career has come to an end this offseason.  Urlacher joins Ray Lewis, Matt Birk, Ronde Barber, and others to call it quits after last season.

Urlacher was the NFL Defensive Player of the Year in 2005 but he will be remembered more for his season in 2006.

That year, Urlacher led a stout Bears defense that took the team all the way to the Super Bowl despite a sub-par offense.  His most memorable game that season was in a Monday Night Football games against the Arizona Cardinals in Arizona.  The Cardinals jumped out to a big lead but Urlacher and the defense fueled a comeback victory.  In this game Urlacher had 25 tackles and forced a fumble that was returned for a touchdown.

The Bears had a 13-3 regular season record and made it to Super Bowl XLI against the Indianapolis Colts.  In the game Urlacher had 7 tackles but that wasn’t enough to stop the Colts as the Colts won 29-17.

In March, the Bears announced that they wouldn’t re-sign Urlacher, who was a free agent this offseason.  There never were many rumors about Urlacher signing anywhere.  The only real rumor was that the Minnesota Vikings and Denver Broncos had displayed interest in him.

Even then, either the teams weren’t very interested or Urlacher just didn’t feel their offers were good enough and wanted to stay having played with the Bears his whole career leading to his retirement announcement.

What Urlacher will be remembered the best for is being the face of the Bears defense for the last decade and in an era where many well-known players leave in free agency, Urlacher stayed with the same team for his whole career.

While Urlacher stayed with one team throughout his career, Woodson is returning to the team that drafted him back in 1998.

After becoming the only primary defensive player to win the Heisman Trophy, Woodson declared for the 1998 NFL Draft and the Raiders took him 4th overall.

While with the Raiders, Woodson made it to XXXVII but lost to the Tampa Bay Buccaneers.  In the previous playoffs, Woodson was part of the infamous “Tuck Rule Game.”  Woodson hit New England Patriots QB Tom Brady and appeared to force a fumble which was recovered by the Raiders.  When the play was reviewed, it was ruled an incomplete pass despite looking like a fumble.  The rule that overturned the fumble is called the “Tuck Rule” and was eliminated this offseason.  This call cost the Raiders the game as the Patriots kicked the game tying field goal later on that drive and then won in overtime.  The Patriots went on to win Super Bowl XXXVI.

In 2006, Woodson signed a 7 year deal worth a maximum of $52 million with the Green Bay Packers.  Woodson would become one of the leaders of the Packers defense and was an important playmaker for them.

With the Packers, Woodson was able to do something he couldn’t with the Raiders, win a Super Bowl.  The Packers made it to Super Bowl XLV. However, in the first half, Woodson broke his collarbone and wasn’t able to return to the game.  The rest of the team was able to finish the job though, winning 31-25 over the Pittsburgh Steelers.

This offseason, the Packers released Woodson due to his salary cap number and his age, 36. 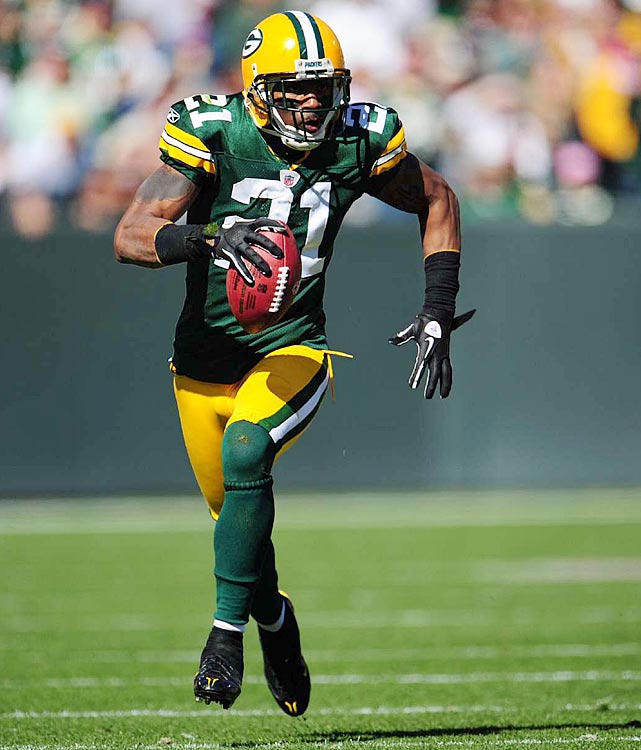 As a free agent, there wasn’t much of a market for Woodson until recently.  In the end, it came down to the Raiders and the Denver Broncos for Woodson.

Denver cornerback Champ Bailey said on the radio that there was “no friggin way” that Woodson would pick the Raiders, a re-building team, over the Broncos, a Super Bowl contender.

The reason that Woodson chose the Raiders was that it meant a lot to him to finish his career in Oakland.

It is unclear what role Woodson will play with the Raiders.  Woodson had been a cornerback his whole career but moved to safety last season due to his age and the decline in his skills.  We will have to wait and see where Woodson lines up during training camp for the Raiders to see what position they view him as and how they plan on utilizing him.

One of the most surprises events this offseason, in my opinion, was that it took this long for Freeney to get a contract.  Yes, he is 33 years old and veterans haven’t had much of a market this year, but he has averaged 9.8 sacks per season in his 11 seasons.

Even with that, it took a torn ACL from the Chargers 1st round pick last year, Melvin Ingram, to get Freeney his contract.  While Ingram only had 1 sack last year, he was a top pass rushing prospect in last year’s draft and, he was expected to start this year as the Chargers let Shaun Phillips walk in free agency.

Last season, Freeney had to transition to a 3-4 defense after playing in a 4-3 defense his whole career.  In the 3-4 defense he was a standup OLB instead of a DE with his hand in the dirt like in a 4-3.  He struggled with this transition recording only 5.5 sacks in 14 games which is the second worst season of his career sack wise.  The worst was in 2007 where he only played in 9 games and had 3.5 sacks.

Interestingly, the Chargers also play a 3-4 defense.  Freeney’s signing with a 3-4 team signifies the limited market that he had.  He would have preferred to go to a 4-3 team but he didn’t have the opportunity or just didn’t like any of the offers he received from these teams.

The Chargers will use Freeney as a situational pass rusher which will get the most out of him.  Since he is 33 years old, Freeney will be slowing down and won’t be able to play a whole game.  Having him as a situational pass rusher will allow Freeney to put his hand in the dirt more often as the Chargers will be in sub-packages when he is in the game.  Most of the time, these sub-packages involve four lineman which would work to Freeney’s strengths.

Due to Ingram’s injury, the Chargers had to go out and find a pass rusher as they had nobody to start opposite of Jarret Johnson who is a great run defender but doesn’t offer much in terms of pass rush.

As we look to where these big name NFL free agents may end up, where would you predict…